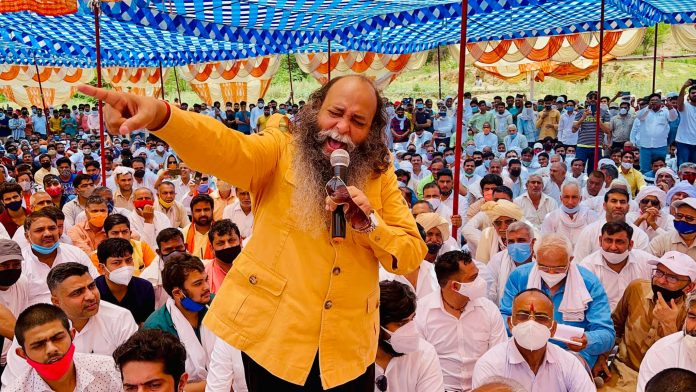 Suraj Pal Amu at the mahapanchayat held in Indri village, in Haryana’s Nuh district. The Karni Sena president once offered a reward of ₹10 crore to anyone who beheaded Padmavati director Sanjay Leela Bhansali and the film’s lead actor, Deepika Padukone | Image: Faceook

On May 30, a mahapanchayat was held in Indri village, in Haryana’s Nuh district. It attracted around 50,000 people from Haryana, Uttar Pradesh, Rajasthan and Delhi. The crowd had gathered to demand the release of six people accused of lynching a Muslim man from police custody.

Among those who addressed the mahapanchayat that day was Karni Sena president Suraj Pal Amu, who once offered a reward of ₹10 crore to anyone who beheaded Padmavati director Sanjay Leela Bhansali and the film’s lead actor, Deepika Padukone. On May 30 Amu once again lived up to his reputation: He issued violent threats against Muslim men and asked “true Hindus” to rise and teach a lesson to “these sons of Pakistan”.

In the lead-up to the Indri mahapanchayat, several similar gatherings were held – including one in Kira Village, Nuh Tehsil; another in Badauli Village, Faridabad – to call for the release of the six men. The gatherings were attended by local BJP and RSS leaders.

On May 16, Asif Khan, a 27-year-old fitness trainer and resident of Khalilpur Kheda, and his cousins Rashid, 30, and Wasif, 31, had gone to Sohna to buy medicines. While returning they were waylaid by a gang of men. Asif was lynched. Rashid later told the media that the mob had asked them to chant ‘Jai Shri Ram’ and threatened to kill all Muslims.

The police soon registered an FIR against 14 people and took six men into custody. According to reports, three of those six were BJP and RSS workers. The police maintained that the reason for the attack was an “old enmity”.

Since the arrests, fringe groups – supported by local Hindutva leaders – have led an increasingly shrill public campaign targeting minorities in Mewat. The loose boundaries of Mewat generally include parts of Haryana, Rajasthan and – crucially for Hindutva groups – Uttar Pradesh, where assembly elections will be held next year. Historically Mewat has also been a Muslim-majority region.

In his May 30 address, Amu said Asif “was a Muslim and he died because of his deeds. Muslims are not our brothers, they are butchers. They are real culprits”.

Mukesh Sharma, an RSS worker from UP who had travelled to Indri, told The Federal: “I came here to support my Hindu brothers. I came to know that Muslims were troubling my people in my own country. Today I’ve come. If they [Muslims] continue doing this, a flood of Hindus will arrive. They are only a handful, we are the entire country.”

Not content with organising public meetings, the right-wing groups have also formed a committee whose main function is to put pressure on the police, the administration and the government of Haryana. The committee, which also consists BJP and RSS leaders – meets every second day to discuss its plans.

One committee member associated with the BJP told The Federal that if the accused were not released, “we will organise mahapanchayats in which a crore of people will participate. And if the administration still refuses to accept our demand, we are ready to fight the administration and those p*** [Muslims].”

Sunil Bainsla, BJP IT cell chief, Palwal, said: “The committee will decide on the further course of action. They are in touch with the administration. Whatever they [the committee] say, we will follow. The people are angry, and the anger is justified, as the police have arrested innocent people.”

A political analyst told The Federal that the BJP was once again trying to polarise communities ahead of elections.

“We know how much the BJP loves polarising. Their entire votes come from polarisation,” said Rohtas Nagure.

“They are trying something similar in Mewat, which is the only Muslim-dominated area in Haryana with 80 per cent Muslims and 20 per cent Hindus. The BJP knows that its policies have failed. Farmers and even traders are against them. They also failed to contain COVID-19.”

The party was trying to win votes in UP by “standing with the Hindus, just like it did in Muzaffarnagar”, Nagure said. “The Muzaffarnagar riots played a major role in the BJP’s 2016 win. Now that elections are once again due, they are doing what they are known best for.”

In August-September 2013, a Jat girl was allegedly molested by a Muslim boy in Kawal village of Muzaffarnagar District. The girl’s cousins, Gaurav and Sachin, beat the Muslim boy to death. In retaliatory violence, Muslims killed both young men.

After this, both sides called mahapanchayats. At a public meeting in Nangla Mandor, local BJP leaders allegedly instigated the Jat community to take revenge. The violence resulted in 62 deaths and 50,000 Muslims were displaced.

A 2019 study by the German Institute of Global and Area Studies found that the BJP’s IT cells use “ideological/religious polarisation and opposition suppression” to further their party’s agenda. Since 2014, when the first Narendra Modi government came to power, attacks against journalists, academics, and critics of the larger Sangh Parivar have steadily gone up.

A 2016 study by Yale University revealed that the BJP saw a 0.8 percentage point increase in its vote share “following a riot in the year prior to an election”. In short, polarisation works.

Nagura said the police should “learn from Muzaffarnagar and be more proactive in this case”. “The case is simple. Someone killed a person. Whether it was lynching or old enmity, the accused should be behind the bars. But the police also need to proactively book the people involved in hate speeches,” he said.

A local Muslim group has filed a complaint with the Mewat superintendent of police against those making inflammatory statements at these mahapanchayats and spreading hate and enmity among people. They include BJP leader and former Palwal MLA Subhash Chaudhary.

Two other complaints have also been filed: one by local councillor Anjum Hussain and the other by advocate Farukh Abdullah. The complaints said leaders who attended the mahapanchayats wanted to instigate riots.

Despite several attempts, The Federal could not reach Narendra Bijarniya, SP Mewat, but he told the media that the police would not bow to outside pressure.