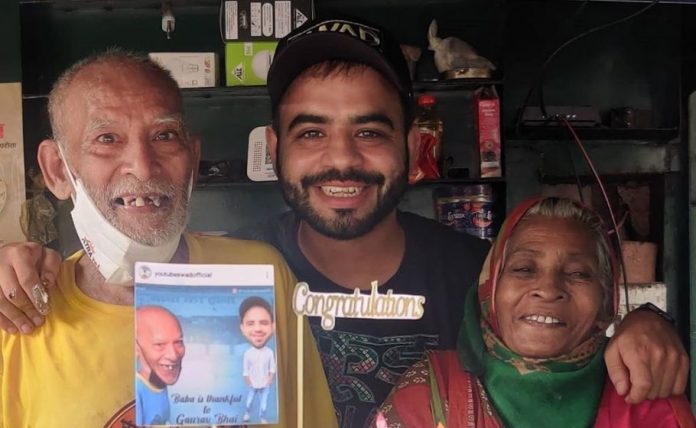 Kanta Prasad, 80, was confident that better days lay ahead. Last year the food stall owner in Malviya Nagar, Delhi, had shot to fame after a video of him tearfully recounting his lockdown woes, shot by a city YouTuber, went viral on social media.

The video, which came at a time of nationwide exodus of workers from cities, was picked up by the media. Moved by his plight, thousands of people thronged Prasad’s stall, ordering food, taking selfies and donating money –enough so that Kanta and his wife Badaami Devi could dare to dream of a better future.

Soon, the couple opened a new restaurant, added a new floor to their house, settled their debts and bought smartphones for themselves and their children.

A year on, though, life has come a full circle for the couple. The new restaurant closed in February and they are now back at their old dabha where sales, which saw a 10-fold jump after the initial YouTube video, have slumped over the past few months.

Also read: #BabaKadhaba: A post that made an elderly couple smile

Prasad told the Hindustan Times that the fourth COVID-19 wave, which had forced the closure of the old dhaba for 17 days and further affected sales, had once again led him and wife to penury.

“The daily footfalls at our dhaba have declined because of the ongoing COVID lockdown, and our daily sales have come down from ₹3,500 before the lockdown to ₹1,000 now. The income is not sufficient for our family of eight,” Prasad told the HT.

Prasad opened his new restaurant last December. For the first few days, it was a success. He had two cooks and waiters. His entire family sat behind a gleaming counter, collecting payments. But after the initial frenzy, customers started disappearing – and the overheads began to add up.

Prasad said he invested ₹5 lakh in the restaurant and hired three workers. The monthly expenditure was around ₹1 lakh. “But the average monthly sales never crossed ₹40,000. I had to bear all the losses. In hindsight, I feel we were wrongly advised to open a new restaurant,” he said.

The restaurant collapsed in three months. “Of the total investment of ₹5 lakh, we managed to recover only ₹36,000 from the sale of chairs, utensils, and cooking machines, after the restaurant shut down,” said Prasad, blaming Tushant Adlakha, a social worker who, he said, had encouraged and helped him to open the new restaurant at a rented place.

“Essentially it was he [Adlakha] and his team who managed and supervised everything, including the investment and sales. He said he would make it a success, but he never gave enough time for the restaurant,” said Prasad.

In November, Prasad had filed a cheating case against YouTuber Gaurav Wasan, who had shot the viral video. Prasad claimed Wasan had collected large sums of donations, but handed him only a small part of it.

Wasan denied the allegations and claimed that he gave to Prasad all the donations – ₹4.20 lakh – he had received. “I was heartbroken and was mentally stressed for a couple of months, as the allegations had affected my reputation. Baba has since called me a few times on my mobile phone but I never responded. I have moved on,” said Wasan.