Two days after Jawaharlal Nehru University (JNU) students took to the streets protesting a 300% hike in hostel fees, the varsity administration on Wednesday (November 13) skipped a crucial meeting on the issue. To make the issue worse, the representatives received a mail on 12:40 pm that the meeting was scheduled 18 kms away from the University, at 12:30 pm.

The JNU executive council, which has representatives from the university’s students’ association (JNUSU), teachers’ association (JNUTA) and the administration was to discuss the issue after Union Human Resource Development (HRD) Minister Ramesh Pokhriyal Nishank, had assured the students on Monday that their demands will be addressed.

In a statement on Wednesday, the JNUTA said, “We condemn in the strongest terms the mockery that the JNU administration made of institutional processes today by reducing the meeting of the Executive Council into a farce utterly lacking in any legitimacy.”

“At the call of the JNUTA, several teachers had assembled outside the convention centre, the scheduled venue of the meeting, to appeal to the members of the Executive Council to support the demands of the teachers and students in the meeting. The demands raised by the JNUTA included the withdrawal of the steep hike in hostel charges as well as other issues of teachers like delays and denials in promotion,” the statement said.

The meeting didn’t take place after three elected teacher’s representatives and five Deans of Schools turned up for the meeting at the scheduled time. However, no members representing the administration or the Registrar were present at the venue. Neither any of the external members of the Executive Council turned up at the venue. Even after more than an hour had passed from the scheduled starting time of the meeting, no information was provided to the members who were waiting inside and attempts to contact the registrar proved futile as there was no response forthcoming.

“There are reports that some meeting has been clandestinely held at a venue other than the announced one, 18 kms away from the University. However, the three elected teachers’ representatives, who are statutory members of the Council, received no official communication in time about the change in venue,” said D K Lobiyal, JNUTA president. 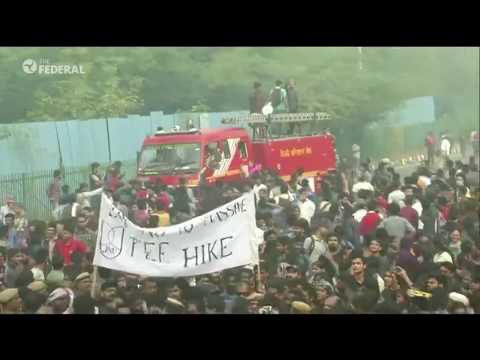 Speaking to The Federal, Surajit Mazumdar, JNUTA secretary said, “Through his actions today, the JNU vice-chancellor has once again proved that he is utterly incapable of leading the University’s administration and governance. JNUTA wants to make it clear that no meeting held under these circumstances can be considered a properly convened meeting. No decision taken at such a meeting can therefore be considered lawful or valid. JNUTA rejects completely this governance by subterfuge and reiterates its demand for the resignation of the VC.”

Teachers, Deans and external members of the council were shocked that nobody from the administration was present at the 283rd Executive Council scheduled to take place at the Convention Centre at 10.00 am.

“At around 12:40 pm we saw a mail from the administration to some of us not all informing about the change in venue. The letter gave the address as Association of Indian Universities, AIU House, 16 Comrade Indrajit Gupta Marg, New Delhi and the time of the meeting as 12.30. It was obviously not possible for the three of us to make our way to the meeting 18 kms away. In this way, we the elected members were deprived of our right to participate in the deliberations of the Executive Council on important matters concerning the university,” said Professor Sachidanand Sinha of Centre for the Study of Regional Development, School of Social Sciences and a teacher’s representative at the executive council.