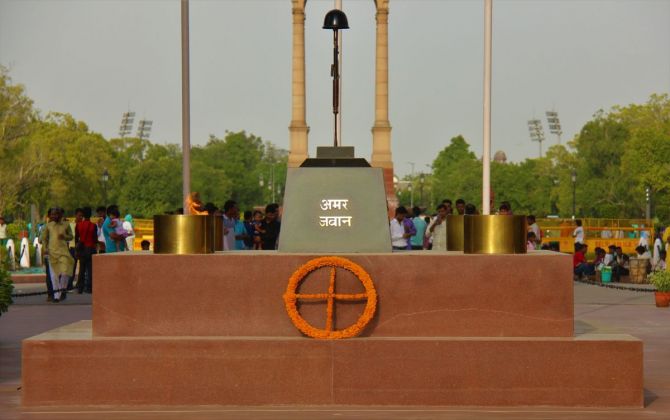 The ‘Eternal Flame’ of Amar Jawan Jyoti which has been burning for the past 50 years at the India Gate will be put out and merged with the flame of the National War Memorial at a ceremony on Friday (January 21), days ahead of Republic Day.

According to Defence Ministry sources, a part of the torch at Amar Jawan Jyoti will be carried to the war memorial and the two flames will be merged at 3.30 pm in a ceremony presided over by the Integrated Defence Staff Chief, Air Marshal Balabhadra Radha Krishna.

The step is reportedly being taken in view of the difficulty faced in the upkeep of both the flames. According to reports, the Army has questioned the need for a separate flame for martyrs at India Gate when the torch at the war memorial is already there. The Army has said that the names of martyrs inscribed on India Gate are also found at the National War Memorial.

It is to be noted that the National War Memorial was built to pay homage to Indian soldiers who laid down their lives for the country in armed conflicts and wars. It was inaugurated by Prime Minister Narendra Modi on February 2019. The monument, spread over a sprawling 40 acres of land, has been built around the canopy near India Gate and has the names of martyrs who died in India’s wars with Pakistan and China, the 1961 war in Goa, Operation Pawan and others including Operation Rakshak.

The Eternal Flame at India Gate, on the other hand, dates back to 1972, and was built to commemorate the soldiers who laid down their lives in the Indo-Pak war of 1971. The memorial is known for its famous symbol of an inverted bayonet and a soldier’s helmet over it flanked by the flame.

The India Gate was built by the British to remember soldiers of the British Indian Army who died in the First World War.