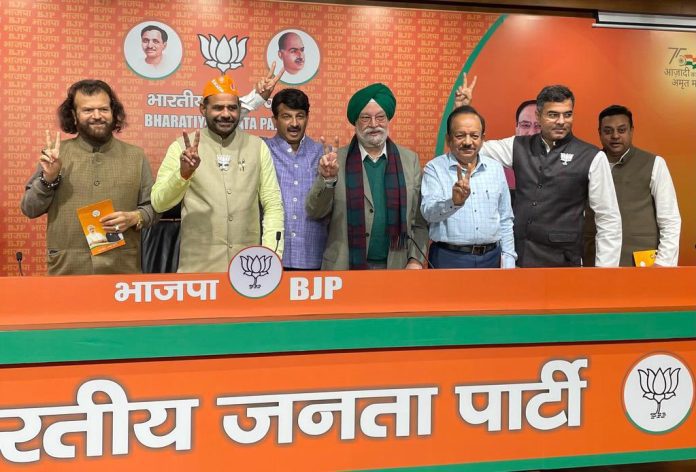 The civic polls in Delhi have become a prestige battle for both the Bharatiya Janata Party (BJP) and the Aam Aadmi Party (AAP) and the former has come out all guns blazing to attack the latter and woo the voter.

The BJP deployed 12 Union ministers and five chief ministers to blunt AAP’s campaign of its ‘Delhi Model’ of governance, centred around education, healthcare and welfare schemes in the MCD elections.

The top leaders picked up issues such as corruption, development, cleanliness, and other issues to take on the Delhi party.

While Delhi Chief Minister and AAP convener Arvind Kejriwal has maintained throughout that the party will get rid of corruption in MCD within 3-4 months, Union minister Piyush Goyal has accused the Kejriwal government of being corrupt and of having failed to perform its duty.

“People now have a chance to answer the Kejriwal govt for their irresponsible, corrupt, false promises and for misleading people,” reiterated the commerce minister.

“India will become a developed country by 2047 as per the vision of PM Modi and there is no place for revri (freebies for votes) politics,” stated Puri.

The Centre is committed to making Delhi one of the best capitals in the world, assured Puri, as he flagged off a fleet of video vans as part of the BJP’s electoral campaign in November.

Reiterating one of the key poll promises, Puri said that every slum dweller will be provided flats and that 17,000 flats are ready for allotment. Housing scheme under ‘Jahan Jhuggi Wahan Makaan’ will benefit around 10 lakh people in Delhi, he added.

Ahead of the 2020 assembly elections, the Centre released the PM-UDAY scheme to give ownership rights to residents of Delhi’s 1,731 unauthorised colonies. The BJP won eight seats in 2020, while the AAP won the remaining 62.

Emphasising the importance of development, Civil Aviation Minister Jyotiraditya Scindia, said: “When it comes to development not just in India, but in the world, you will not get a better person than PM Modi.”

As the AAP has attacked the BJP- controlled MCD over its failure to reduce the height of three infamous landfills, Union Minister of Ports, Shipping, Waterways and Ayush Sarbananda Sonowal, attacked AAP for its failure to fulfil its promise of cleaning Yamuna, and underlined how Centre’s Namami Gange plan was yielding results.

Sonowal was leading the campaign at Munirka, Green Park, Andrews Ganj & Malviya Nagar with the slogan of “Har Ghar Bhajpa.”

Speaking at a public meeting in Lajpat Nagar, Union minister Nitin Gadkari slammed the AAP for its failure to use the Centre’s funds to clean the Yamuna. He said the river is  getting dirtier day by day. The people of Delhi know that BJP is the symbol of development and they will vote for the party in the MCD polls, Gadkari asserted.

During the roadshows, BJP leaders have maintained that people must be made an empowered stakeholder and join hands with a government which is committed to providing efficient solutions to the city’s woes.

Kejriwal has made a similar promise of turning resident welfare associations into ‘mini-councillors’, thereby giving these bodies a greater role in governance and access to funds.

Commenting on BJP’s approach of deploying Union ministers and state leaders for the upcoming civic poll, Anuja Kapur, Delhi BJP spokesperson said: “We have viewed all elections equally- be it civic elections, assembly polls or parliamentary elections. BJP works as a unit, and thereby we don’t differentiate between local or national leaders. It was important for us to send the right message going into the polling day.”

But the AAP’s position throughout the election campaigning was that “If BJP had worked in MCD, it would not have needed big campaigners”.

In a final push, all parties are looking to garner the last-minute advantage going into December 4.