The Congress Working Committee on Saturday (August 10) again urged Rahul Gandhi to reconsider his decision to quit as party chief and said it was yet to take a final call on his resignation.

The CWC unanimously appealed to Gandhi to lead the party, saying he was the best person for the top post at the time when the BJP-led government was “assaulting democracy and undermining people’s rights”.

After Gandhi refused to reconsider his decision, the CWC began consultations on finding his successor under five regional sub-groups led by younger leaders.

Congress chief spokesperson Randeep Surjewala said the CWC will meet again during the day to discuss the reports of the sub-groups and take a call on Rahul Gandhi’s resignation by evening.

As the Congress Working Committee began consultations on Saturday to find its next president, UPA chief Sonia Gandhi and outgoing party head Rahul Gandhi left the meeting midway, saying they couldn’t be part of the process.

“We cannot be part of this process,” Sonia Gandhi said after she recused herself from the deliberations. Rahul Gandhi left soon after, saying he would be visiting his parliamentary constituency Wayanad in Kerala, which is currently ravaged by heavy rains.

Sonia Gandhi said her name was included by default in the region-wise committees formed for wider consultations on selecting a new party chief.

Rahul Gandhi, while resigning as the party president on May 25, had asked the CWC to elect a president from outside his family. His sister Priyanka Gandhi Vadra is a Congress general secretary.

The CWC has decided to have consultations with leaders from across the country and the party’s top decision-making body then was divided into five groups for different regions — northeast, east, north, west and south.

Significantly, besides CWC members, several state unit chiefs of the party, including Congress Rajasthan president Sachin Pilot and Punjab head Sunil Jakhar, as well as some other office bearers were present at the meeting.

All the CWC members have been assigned the task of holding consultations with state unit chiefs, legislative party leaders and heads of frontal organisations across the country. They will hold these consultations in groups.

The group for southern region will be headed by Rajiv Satav and will include Manmohan Singh, Anand Sharma and Mukul Wasnik as its members.

The consultations with state leaders would take place at the AICC headquarters, and would start soon after the CWC meeting, the sources said.

The top Congress leadership held a meeting on Friday with its state unit chiefs, leaders of its state legislature parties, general secretaries and in-charges, where they were told by Rahul Gandhi that the new party chief would be appointed within the next few days after wider consultations, sources said.

The meeting was held at the party’s Gurdwara Raqab Ganj Road “war room” to discuss the government’s decision to abrogate the provisions of Article 370 of the Constitution in Jammu and Kashmir and divide the state into two Union territories.

The meeting comes after several senior party leaders such as Amarinder Singh, Karan Singh and Shashi Tharoor voiced concerns over lack of clarity on the leadership issue.

Senior Congress leaders also met Sonia Gandhi at her residence here on Friday. Sources said senior leaders Ahmed Patel, A K Antony and K C Venugopal were learnt to have discussed with Gandhi certain names of probables, one of whom could be made the interim president of the party.

The names of senior Congress leaders Mukul Wasnik, Mallikarjun Kharge, as well as younger leaders Jyotiraditya Scindia and Sachin Pilot are doing the rounds for the top post.

A number of partymen have expressed their opinion in public, saying the delay in selecting the new Congress chief is harming the party.

Shashi Tharoor said the Congress Working Committee or CWC should appoint an interim president immediately and then hold polls for the party chief’s post as a leader elected by workers will be empowered and have more credibility. 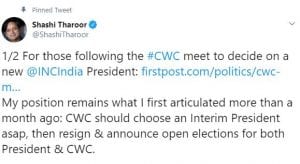 Even though Rahul Gandhi had ruled out the possibility of a family member succeeding him, several leaders such as Punjab Chief Minister Amarinder Singh and Tharoor have voiced support for Priyanka Gandhi Vadra throwing her hat in the ring.

The party has also been grappling with a series of desertions by leaders from Karnataka and Maharashtra, the latest being that of ex-Congress Rajya Sabha chief whip Bhubaneswar Kalita and MP Sanjay Sinh.

Several leaders cited indecision and confusion within the rank and file of the party as a reason to quit. The party is hoping to resolve the leadership issue and move forward quickly with assembly elections in Maharashtra, Jharkhand and Haryana coming up.