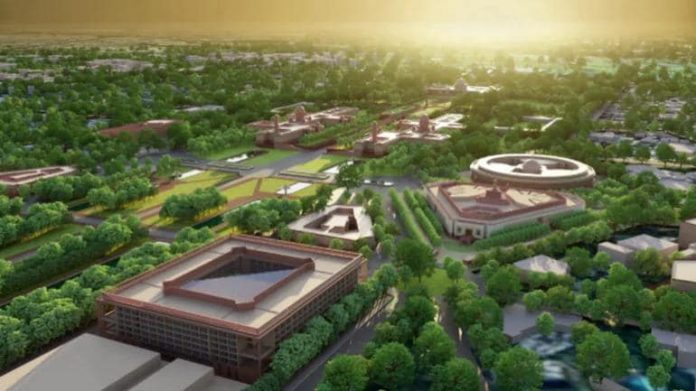 An artistic model of the Central Vista project

The Central Public Works Department, the nodal agency of the high-powered Central Vista redevelopment project, has called on Tuesday (November 9) for pre-qualification bids to construct the ‘Executive Enclave’, which will include Prime Minister’s four-storied office building, a two-storied India House, the Cabinet Secretariat and the National Security Council Secretariat.

These buildings to be built at a cost of ₹1,171 crore will have to be completed within 24 months of being awarded. The pre-qualification bids will be opened on November 24, said media reports. Despite Opposition protests and court petitions against the “criminal wastage” of resources in undertaking this mammoth project, the Central government is steaming ahead with the Central Vista Project termed by the Delhi High Court as a project of  “national importance”.

According to the Central Public Works Department (CPWD), which comes under the Union Housing and Urban Affairs Ministry, the ‘Executive Enclave’ will be built on the south side of South Block in plot number 36/38, which is situated in the high security zone in Lutyens’ Delhi. The existing plots in the South Block will first be demolished according to the plan.

They are currently occupied by Defence establishment hutments, which will be relocated to KG Marg and Africa Avenue in New Delhi.

According to the tender document, the new ‘India House’ will be used to host meetings with foreign dignitaries. Under the plan, the Prime Minister’s new residence is to come up on a 15-acre plot near South Block as well. A spokesperson of the consultancy firm, which is overseeing the project, the Ahmedabad-based firm, HCP Design, Planning and Management Private Limited, led by architect Bimal Patel, informed Indian Express that the design for PMO and PMR is still in its concept stage.

“The broad goal is to provide modern and highly functional facilities at one location, to reduce redundancies of infrastructure and improve city traffic management,” the HCP spokesperson said, added the IE report.

The CPWD bid document too stated that the ‘Executive Enclave’ will be designed to”improve potency and functioning” by an elaborate planning of the formation of the different departments with supporting facilities. This newly-built structure will ensure prime security and excellent interconnectivity within the Enclave and with other offices in Central Vista.

The relocation of these departments will enable efficient security protocols for VIPs and VVIPs without disturbing daily movement of the public in and around the Central Vista, stated the CPWD document. Further, the document stated that he proposed work is of very prestigious nature and is required to be completed strictly within the prescribed time limit of 24 months with the highest standards of quality and workmanship.

According to the CPWD, joint ventures/consortium and special purpose vehicles cannot bid for the project. Earlier this month, infrastructure firm Kamladityya Construction Pvt Ltd came up with the lowest bid for the construction of the Vice President Enclave, which is also under the Central Vista redevelopment project. Last month, Larsen & Toubro Limited was handed the construction and maintenance of the first three buildings of the Common Central Secretariat, while Tata Projects Limited is constructing a new parliament building.

A report in ThePrint said that work is on at a hectic pace to complete this 3-km-long stretch in time for the Republic Day Parade next year. On 26 January 2022, visitors coming to Rajpath to watch the programme will not only have better seating arrangements with better views but also get access to improved civic amenities, including pedestrian-friendly underpasses to manage the footfall efficiently, defined parking spaces, signages, drinking water facility and toilets, added the report.

The redevelopment of the Central Vista, a heritage precinct, declared in the 1962 Master Plan of Delhi as an “important site to meet the aspirations of a rich culture”, is being implemented by the CPWD in a phased manner. Finally, it envisages a new parliament building, a common central secretariat, revamping of the 3-km Rajpath from the Rashtrapati Bhavan to the India Gate, new office and residence of the prime minister, and a new vice president enclave.