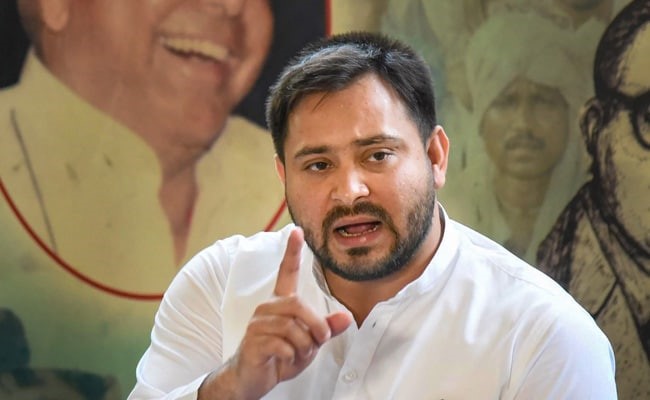 Bihar's new deputy CM advised the RJD ministers to exchange pens and books instead of gifting bouquets, and to be gentle and courteous to people

Bihar deputy chief minister Tejashwi Yadav on Saturday (August 20) has issued a bunch of directives for Rashtriya Janata Dal (RJD) leaders inducted into the state cabinet, which ranges from not buying vehicles for themselves to promoting the tradition of namaste and adaab instead of making anyone touch their feet.

Also, Bihar’s new deputy CM advised them exchange pens and books instead of gifting bouquets, and to be gentle and courteous to people. This code of conduct issued by Tejashwi Yadav through a Facebook post, comes in the backdrop of BJP’s virulent attack on the RJD calling the Mahagathbandhan government a ‘Jungle Raj’. This Jungle Raj tag was used by Nitish Kumar to great effect during his election campaigns against Lalu Prasad Yadav.

Tejaswi Yadav took charge as the deputy chief minister after Janata Dal (United)’s Nitish Kumar broke ties with the NDA alliance and teamed up with opposition parties to form the ‘Mahgathbandhan’. The ‘Mahagathbandhan’, comprises the RJD, JD(U), Congress and the Left (which is supporting the government from outside)

With RJD back in the government after almost five years, the BJP quickly cited recent cases of heinous crimes in the state and the alleged involvement of some of the ministers in criminal cases to claim that Bihar is returning to “jungle raj”.

To dispel this notion, Tejaswi Yadav has released a request list for his ministers:

Firstly, he asks the ministers made from the quota of RJD not to buy any new vehicle for themselves.

Secondly, RJD ministers must now allow workers, well-wishers, supporters or any other person older than them to touch their feet. Instead, they must encourage promote the tradition of salutation, namaste and adaab with folded hands for courtesy and greetings.

Further, he asked his ministers to promote honesty, transparency, promptness and promptly implement all departmental work under chief minister Nitish Kumar’s leadership. Besides, he also encouraged the ministers to exchange pens or books instead of gifting bouquets. He also requested the ministers to remain gentle and courteous with everyone and help poor and needy people on a priority basis irrespective of their caste and religion.

Also read: Bihar’s Grand Alliance will have a coordination committee for smooth run

Finally, he asked all his ministers to promote all developmental work by the Bihar CM, the government, and their departments on social media so the “public can get positive information about your every initiative.”

Meanwhile, reacting to BJP calling the government a Jungle raj, JD(U) president Lalan Singh told the media that BJP’s criticism is nothing but “vidhwa vilap” (widow’s cry) after losing power in the state. He asserted that there is rule of law in Bihar under Nitish Kumar-led government and it will remain so. Nobody is going to hear their (BJP’s) wail after losing power, he said.