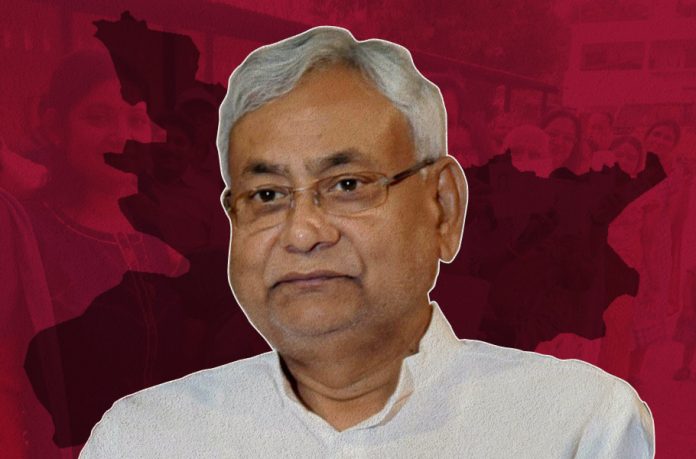 This may be aptly called the beginning of the end. The fact is, Bihar Chief Minister Nitish Kumar currently faces existential crisis after his party, the Janata Dal United, was pushed to the third spot in the Bihar assembly. The frequent remarks by the BJP that the JD(U) is its “junior ally” have now begun to irk the JD(U) leadership.

Nitish had returned to the throne of Bihar for the fourth consecutive time despite his party faring badly in the elections. The BJP improved its performance by registering victory in 74 seats in the elections — a gain of 21, whereas the JD(U)’s tally sharply came down to 43, a loss of 28 seats.

Barely a month after returning as the chief minister, Nitish appears to be feeling not too comfortable in the company of the BJP with the saffron partner trying constantly to dominate him. Now, the developments are taking place more frequently much to the bewilderment of the chief minister. As many as three recent developments at quick internals are a clear pointer to the fact that the days of Nitish are virtually over now.

The first was the biggest-ever shocker which the JD(U) leadership had never imagined even in their wildest dreams. The entire party leadership was shocked when the BJP, JD(U)’s own ally in Bihar, poached JD(U)’s legislators in Arunachal Pradesh and ultimately inducted six of its seven lawmakers into the party. What was strange, the BJP did that even though the party was enjoying comfortable majority in the House and there was no threat to its government in Arunachal. The JD(U) is now seriously debating if it was a “warning message” for the chief minister that the same could be repeated in Bihar too.

Nitish’s party has reacted strongly to this BJP move, underling the anger in the JD(U) camp. “We don’t deceive anyone nor do we give a chance to others to deceive us either. We also don’t hatch a conspiracy but what happened in Arunachal was totally against the coalition dharma,” RCP Singh said, soon after being elected as the JD(U)’s national president on Sunday. He also warned of serious consequences if any word was spoken against Nitish. The BJP, of late, has begun describing JD(U) as “junior ally” which has irked the party leadership.

Secondly, the BJP has begun publicly slamming the chief minister over his failure to tackle deteriorating crime situation in the state. Now, the party is exerting pressure on the chief minister to quit the home department portfolio and give it to someone else so that the law and order situation could be better tackled.

“Nitish Kumar is burdened with too many assignments. He must give away the home department to someone else,” BJP legislator and former union minister Sanjay Paswan has suggested to the chief minister.

Thirdly, the RSS, the ideological fountainhead of the BJP, is now building pressure on the chief minister to legislate law over “Love Jihad” — a term radical Hindu groups use to accuse Muslim men of converting Hindu women through marriage, the pattern seen in Uttar Pradesh.

“Love Jihad cases are increasing fast and there is an urgent need to frame a harsh law for Bihar too,” demanded RSS’s senior pracharak and organisational secretary (Bihar-Jharkhand) of Hindu Jagran Manch Dr Suman, addressing a workers’ conference in Patna last week. The very demand too has been strongly condemned by the JD(U). “There is an attempt to create an atmosphere of jealously in the country over love jihad,” JD(U) general secretary KC Tyagi commented.

Amid a chain of such developments, the chief minister stepped down as the national president of the JD(U) and appointed his close confidant Singh as his successor. That Singh, a former bureaucrat-turned-politician and Kumar’s fellow caste man from his home district, was chosen over several able party leaders for this post, tells another story about how the chief minister feels insecure now.

Political analysts say such demands are coming at repeated intervals since the chief minister has turned weaker and the BJP doesn’t care much about him anymore. “In fact, it is the BJP which is dealing the Bihar politics while Nitish Kumar has been allowed to carry out only his nali-gali (construction of drains and lanes) project. He is not more than an assistant engineer in the present NDA government,” commented political expert Satyanarayan Madan. He said the chief minister had no political future now.

Another political expert DM Diwakar made similar observations. “Nitish Kumar’s condition has turned very pathetic now and the situation is that he can’t do anything except dancing to the tunes of the BJP. His party leaders’ reactions are just a face-saving exercise,” commented Diwakar, former director with the Patna-based AN Sinha Institute of Social Studies.

The BJP began clipping the wings of the chief minister right from the formation of the government in the state when it dropped Sushil Kumar Modi as his deputy and instead appointed two persons as his deputies. Modi, a close confidant of Nitish, was acting as his deputy for the past 15 years but now he has been sent to Delhi as a Rajya Sabha member. The BJP leadership has now also started saying that the NDA got the mandate in Bihar because of Prime Minister Narendra Modi, and not because of Nitish.