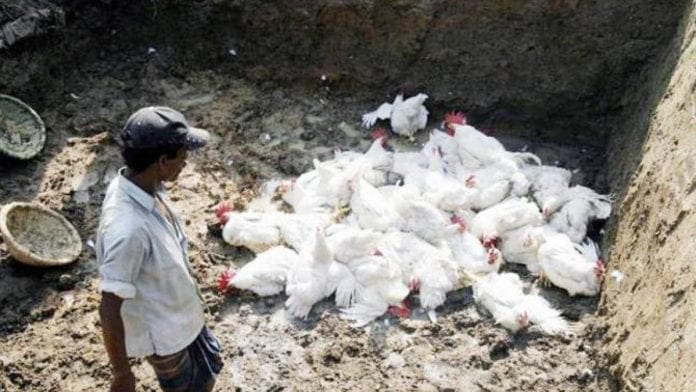 Deserted streets, farmlands and pathways and other open spaces present very horrifying scenes at this time in Bihar. While the surging coronavirus cases prompted the Indian government to enforce complete lockdown, a spurt in cows, bats, dogs and pigs in deserted Bihar has triggered panic.

It all started earlier this month when dozens of crows started falling dead from trees in eastern parts of the state. Surprised farmers reported the matter to officials.

The animal husbandry officials, however, blamed it on use of heavy dose of pesticides by farmers and said it was not a problem created by the humans.

By the middle of this month, however, the overall situation turned serious when even several crows and bats were found dead on Patna high court premises, Punaichak, Boring Road, Miller High School, RJD office and Gandhi Maidan localities of Patna and surroundings.

Initially, the animal husbandry officials described the deaths as a result of fluctuation in day’s temperature and asked the masses not to be concerned but reports of tests conducted at a Kolkata laboratory has given an entirely different account. The test confirmed the cause as bird flu.

“Crows and other birds have died from bird flu in three districts of Bihar (Patna, Nalanda and Nawada). We are keeping a close watch on poultry farms in the three districts and initiating necessary actions,” Bihar’s animal husbandry and fisheries department secretary N Sarvana Kumar said, adding that he had formed a team of experts from Bihar Animal Sciences University.

As per the report, 209 crows have died so far. Of them, 149 died in Patna while remaining bird deaths were reported from Rohtas, Munger, Nawada, Banka, Begusarai, Gaya, Bhagalpur, Nalanda, Vaishali and Sheikhpur.

“We have begun culling of birds in the radius of one km of the affected areas while we are keeping a vigil in a radius of 10 km,” animal husbandry official Dr Diwakar Prasad said today.

Not only crows, but even dozens of bats have died in Patna and Nawad districts of Bihar. Witnesses said around 40 bats were found dead in Hisua areas of Nawada district on Wednesday.

Scared villagers later called up the local BDO and intimated about the situation. Apart from birds, several dogs too have been found dead in Sheikhpura and Muzaffarpur districts of Bihar in the past one week.

But what alarms the people the most is the death of pigs from swine fever in large numbers. According to reports in the local media, more than 300 pigs have died in Bhagalpur and Rohtas districts of Bihar in the past few days, dealing a huge financial blow to the poor and raising health scare. Majority of these deaths have been reported from Bhagalpur district.

The pigs started dying in the middle of the month and the overall situation turned serious soon. By the time the animal husbandry officials acted, more than 300 pigs had died, but what raised concerns was their disposal. Eventually, the local municipal corporation acted and buried the dead pigs.

“All the pigs died from swine fever but there is nothing to worry as this disease is not transmitted to human beings,” Bhagalpur district animal husbandry officer Shambhunath Jha said.

Carcases of all the pigs were later buried 10 feet under soil. The incident prompted the authorities to sanitise all 51 wards in Bhagalpur district and remove filth from the municipal areas.

Local mayor Seema Sah said the pigs have caused panic in the region but “we have asked the municipal authorities to keep watch on the situation and sanitise the areas”. “We already are battling coronavirus. Now the outbreak of swine fever has left us further panicky,” the mayor said.

The death of a large number of birds and animals has alarmed the Bihar chief minister Nitish Kumar as well. On Saturday, he held a high-level meeting with the officials concerned for the second consecutive day to review the situation and bring it under control.

The CM asked the officials to keep a close watch on the continuing deaths of birds and animals, and initiate necessary step to check spread of birds flu and swine fever.

Birds flu or H5N1 occurs mainly in birds and is contagious among them. There have been instances of human beings getting infected with the virus.