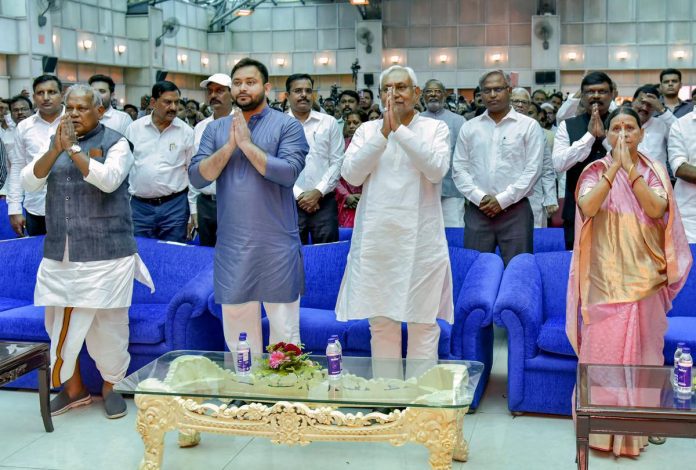 Bihar’s new law minister, RJD’s Kartikeya Singh, had to reportedly surrender in Danapur court on August 16 in a kidnapping case on the day he was sworn in as a cabinet minister. Pic: PTI

Even as Bihar’s new law minister had to be present before the court in a kidnapping case,  on the day of his swearing-in ceremony as a cabinet minister, a poll rights body, the Association for Democratic Reforms (ADR), has found more than 70 per cent of the newly sworn-in ministers in Bihar have declared that they have criminal cases against them.

After Nitish Kumar broke ties with the Bharatiya Janata Party (BJP), the latter has been attacking the new Janata Dal-United (JD-U) government, which is in alliance with Rashtriya Janata Dal (RJD)-led Mahagathbandhan (MGB), saying that several MLAs in the new cabinet have a “criminal background”.

The accusation gained ground as Bihar’s law minister, RJD’s Kartikeya Singh, had to reportedly surrender in Danapur court on August 16 in a kidnapping case. Instead, he was present at Patna Raj Bhawan taking oath as the new minister. Earlier, on August 12, RJD leader Kartikeya Singh was granted interim protection till September 1 by the court. Newspaper reports quoted close sources as saying that the law minister claimed that he had received a relief order from the court of no coercive action till September 1.

A scorned BJP slammed the cabinet, saying it lacked “social equation”, and that several MLAs who had become ministers had criminal cases against them. Nitish Kumar’s cabinet has 16 RJD members, 11 from the JD-U, two from Congress, one from the Hindustani Awam Morcha (Secular), and one Independent.

Also read: Without Nitish and JD(U), BJP has a tough road ahead in Bihar

In the ADR report issued on the criminal background and other details of the ministers in the Bihar assembly, after the cabinet expansion last year on February 9, 2021, had analysed 28 out of 31 ministers, including the Chief Minister from Bihar state assembly, through their election affidavits. In the National Democratic Alliance (NDA) government, the JDU had 11 ministers and 4 of them had declared criminal cases, while 3 had serious criminal cases filed against them.

While, out of the 14 BJP ministers, a significant 11 had criminal cases filed against them.