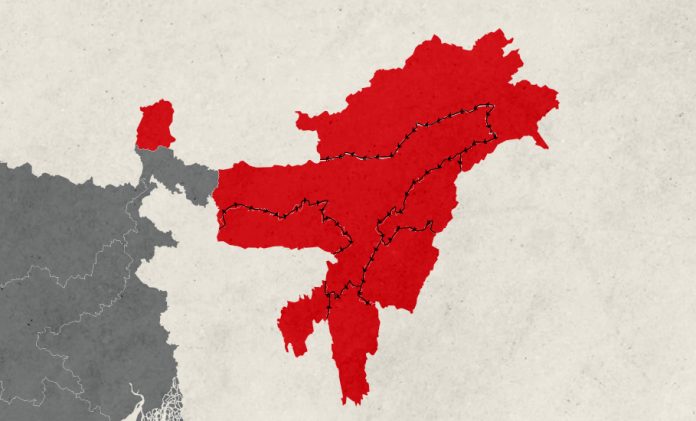 The BJP’s strategy was simple. The nationalist space should be occupied by it, replacing the Congress. For that, ironically, it joined hands with regional parties | Pic: Eunice Dhivya

The switching of flanks by five of the six Janata Dal (United) legislators in Manipur last week followed a disturbing trend that has obliterated the Opposition space in the North East, thereby reducing democracy into a farce.

In most states in the region, it has now become difficult to discern the incumbents from the challengers as the BJP and its allies conveniently play double roles.

Those who try to break the cosy arrangement often end up being poached, either with a carrot or stick.

The arrangement was threatened when Manipur JD (U) chief Kshetrimayum Biren announced last week that his party would “withdraw the support” from the BJP-led coalition government in Manipur.

For the ‘delinquency’, he and his party paid the price of losing five MLAs. A day after the announcement, the five joined the BJP.

A little backgrounder will help better understand the latest political development in the frontier state.

The ruling BJP got a comfortable majority of 32 seats in the 60-member Manipur legislative assembly.

One of its allies, the Naga People’s Front (NPF) won five seats in the February-March elections, taking the strength of the ruling coalition to 37.

Two of the then BJP allies, Nitish Kumar’s JD (U) and the National People’s Party (NPP) of Conrad K Sangma, contested the 2022 elections as challengers to the BJP.

The two won six and seven seats respectively, emerging as principal opposition parties as the Congress was depleted to five seats, having failed to recover from the onslaught of poaching of its leaders by the BJP.

After the bitterly fought elections, the BJP did not include its two former allies JD (U) and the NPP, in the Biren Singh-led coalition government. Eventually, the two parties became part of that expedient arrangement wherein they continued to be in the BJP-led alliance despite not being in the government, loosely occupying both the ruling and the opposition space.

After Bihar Chief Minister Nitish Kumar pulled the plug on his party’s alliance with the BJP, the JD (U) in Manipur waited for about 20 days to contemplate its course of action.

Ultimately, when the party decided to don the role of a ‘real opposition’ severing ties with the BJP, the net was cast, nipping in the bud any possibility of putting teeth into opposition camp.

“No one would have complained if the BJP achieved this political dominance in the region entirely through proper electoral mandate,” said the editor of The Meghalayan Dipankar Roy.

To swell its ranks, the BJP lured 93 MLAs from various parties in the region to its fold ever since the party came to power at the Centre in 2014. More than 30 MLAs joined the BJP from the Congress alone. Among the prominent Congress defectors are Assam Chief Minister Himanta Biswa Sarma and his Manipur and Arunachal Pradesh counterparts Biren Singh and Prema Khandu respectively.

Also Read: Is it constitutional? Nitish on JD(U)’s Manipur setback

When it comes to poaching, the BJP did not even show any mercy to its allies. In December 2020, it took away six MLAs of the JD (U) in Arunachal Pradesh. The state’s lone JD (U) legislator Techi Kaso joined the BJP last month, taking the strength of the saffron party in the 60-member assembly to 49. With seven seats, the JD (U) finished second after the BJP in the 2019 assembly elections.

Of the remaining 11 seats, the BJP’s ally NPP has four, three are occupied by independent MLAs who also support the ruling party while the Congress has four. So, effectively there are only four opposition MLAs in the state, one less than Manipur.

Almost all the regional parties in the region are part of the BJP-led North-East Democratic Alliance (NEDA).

However, at times some of the NEDA constituents and the BJP cross swords during elections ostensibly to divide opposition votes. After elections, they kiss and make up, making a mockery of the mandate.

The NPP, which is a BJP ally and a NEDA member, has decided to repeat its Manipur strategy of parting away from the BJP ahead of the Meghalaya and Nagaland elections in 2023.

The BJP with two MLAs is the junior partner in the NPP-led Meghalaya government headed by Sangma.

As the elections, due early next year, approach, the two alliance partners have now turned bitter critics.

After the NPP decided to go solo, the BJP hinted that shortly it would withdraw its support from the Meghalaya Democratic Alliance (MDA) government, accusing it of corruption.

Also Read: Nitish has broken BJP’s incisors, but faces giant barriers in race to be PM

BJP’s Meghalaya in-charge M Chuba Ao on Saturday (September 3) hinted that the CBI might soon start investigation into the corruption charges against the NPP government.

In Nagaland where not a single Congress candidate emerged victorious in the 2018 assembly elections, all the 60 seats went to the NDA allies. They among themselves had played the role of the incumbent and the opposition until 2021.

In September last year, they got rid of the pretence, deciding to form an opposition-less government. The pretext was to facilitate an early solution to the vexed “Indo-Naga political problem,” which is still in limbo.

As Nagaland now gears up for next year’s elections, these parties are again recalibrating their political position to play the part of ruler and the challenger.

Similar role-switch is also being witnessed in Mizoram, another north-eastern state that will go to poll next year.

There the BJP is trying to be the challenger to its ally, the ruling Mizo National Front (MNF).

“We are preparing to form the first BJP-led government in the state after the next year’s election,” said the state’s BJP president Vanlalhmuaka. In the last assembly elections, the BJP had managed to win just one seat.

For this bizarre political situation that has created a huge vacuum in the opposition space in the region, political commentators like Roy primarily blame the BJP.

In a bid to pursue its goal of the Congress-mukht Bharat, it randomly entered into political alliance with regional parties without any ideological consideration, Roy pointed out.

Traditionally, the landscape of the region was divided into two distinct political tenets, regionalism and nationalism.

While the Congress was the main torch bearer of the nationalistic politics in the region, the regional parties stood for protecting the identity and culture of the ethnic people of the land-locked remote region, which they felt was being threatened by the influx of people from the so-called mainland India.

The BJP, which otherwise likes to project itself as a champion of nationalism, forged alliance with the regional forces in a bid to dislodge the Congress.

Some of its alliance partners, such as MNF and the Indigenous Peoples Front of Tripura (IPFT) were even born out of anti-India separatist movements.

“The BJP’s strategy was simple. The nationalist space should be occupied by it, replacing the Congress. For that, ironically, it joined hands with regional parties,” said Kavi Maram, a political commentator and professor of Rajiv Gandhi University, Itanagar.

Once the Congress has been marginalised, the traditional political divide becomes blurred and so is the democratic concept of ruling and the opposition.