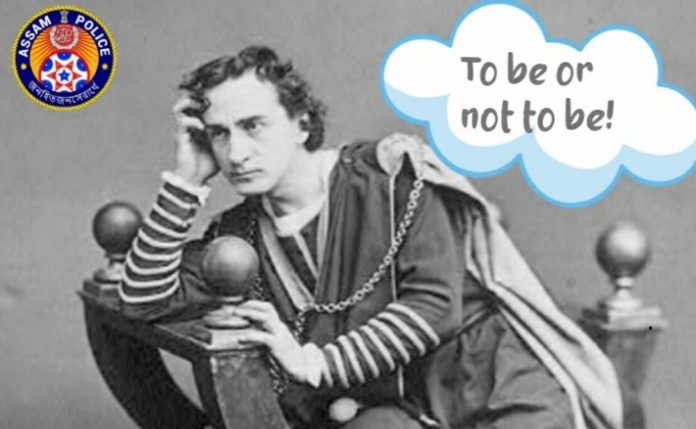 The Assam Police have quite a sense of humour.

Sample these: ‘Hum Do Hamare Do Helmet‘.

‘Your child’s heroes go to work wearing a helmet. Do you?’

These witticisms are part of the innovative methods being employed by the state police to check crime, enforce rules and generate social awareness.

For instance, on December 30, New Year’s Eve, the Assam Police’s Twitter handle had an invitation featuring DJ Lockup with the message: ‘Stag Entry Allowed’! It showed a creative imitation of a new year party poster that cheekily advertised a “special performance by DJ Lockup” and asked readers “not to be our guests”.

If your New Year’s Eve plans include drunk and/or rash driving, this invitation is for you.

“Our idea is to work together with society and impress upon the people that following rules is in everybody’s own interest. We wanted to connect with the people and we have been trying to put across our messages in a language and an idiom that is understood across generations and the entire spectrum,” Guwahati police commissioner Harmeet Singh was quoted as saying by PTI.

Not all Superheroes are Fictional!

Real Life Heroes wash their Hands and wear a Mask to ensure the safety of everyone around.

The quirky campaign has drawn praise and also inspired police forces in other states of India and even abroad.

One has the police urging the public “Don’t be Hamlet. Always wear a Helmet.”

Together, we are safer!

Whether you ride a two-wheeler or ride pillion on one, you must wear a helmet.

Wear helmets not just for your own safety, but your family’s well-being as well.

Even James Bond joins the police in a ‘No Time For Violence’ appeal, while legendary Queen singer Freddie Mercury features in a tweaked poster of Bohemian Rhapsody, urging people not to fall victim to fake news and fact-check before forwarding any message.

Your child’s heroes go to work wearing a helmet. Do you? #HelmetsSaveLives#HumDoHamareDoHelmet pic.twitter.com/pj1nAqKZyv

Behind the smart social media campaign is a team of young consultants, working closely with a group of Assam Police officials, with commissioner Singh at the helm. Tituraj Kashyap Das and Salik Khan are engaged as creative consultants, while Vishal More lends the tech support, according to PTI.

“The power of social media to not only connect but also ensure a positive two-way engagement with citizens is being worked upon to the maximum by the Assam Police. We are perhaps among the handful of police forces where even topmost police officials respond promptly to public queries on social media and send forth help,” the commissioner reportedly said.

Thanks to the messages, the police were able to ensure an incident-free New Year and Bhogali Bihu Uruka celebration (January 13 and 14) in Guwahati.