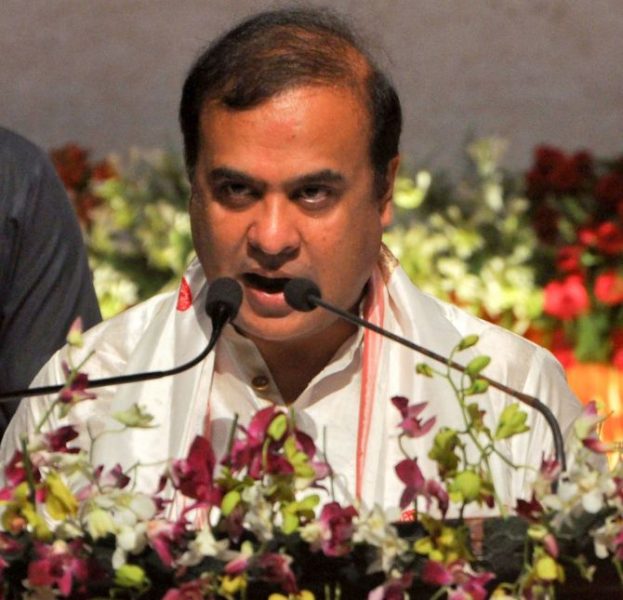 Critics slam CM Himanta Sarma for sending police a signal that shooting criminals trying to flee the police should become a pattern. They believe it is straight out of Yogi Adityanath's rulebook. Pic: PTI

The horrific police brutality during an eviction drive in the Dholpur villages in Assam, which led to the death of two civilians and injured 20 others, has once again drawn attention to the “new, brutal face” of the state police under the rule of Chief Minister Himanta Biswa Sarma. The spotlight is on the Assam police for having shot dead 27 criminals in encounter cases in five months, said media reports.

Many political observers believe that the Assam CM is probably following in the footsteps of UP CM Yogi Adityanath, who runs a vigilante state in the name of curbing rising crime rates. In 2018, UP carried out 1,200 police encounters earning the state CM another sobriquet, “Yogi Encounter Adityanath”.

After the recent video of a poor villager being mercilessly beaten up by the cops at Dholpur surfaced and went viral, critics and rights groups in Assam slammed the state police for having become “trigger-happy”.  The Print said that nearly two dozen deaths have taken place at the hands of the state police since early May.

In September, for example, there have been two such instances. On 12 September, a suspected dacoit reportedly wanted in several cases was shot dead in Dhubri, while a few days later, Assam police shot down two suspected militants after an alleged exchange of fire in Kokrajhar.

In August, in another alleged shootout, the police killed two suspected dacoits, even as three suspected robbers were shot and killed while allegedly on their way to rob a bank. In the same month of August, a suspected extortionist and kidnapper, reportedly was shot at while trying to escape custody. Both received bullet injuries in their legs, added ThePrint report.

Incidentally, Sarma, who took over as CM in May, and had pledged “zero-tolerance” to crime has approved police firing on suspects’ legs on “those who attempt to flee”. The suspected criminals killed or shot with leg injuries include “terrorists”, “drug peddlers”, and “cattle smugglers”, among others, police told The Print. And, they have been shot by the police allegedly in retaliation.

Police encounters under a cloud

The official police data show that there have been 50 encounter incidents between 10 May and 27 September, in which 27 people have been killed and 40 injured. The state has come under a lot of fire for these encounters. Like the case in July of Joynal Abedin, 47, a suspect for dacoity and armed robbery, who was shot at by the police since he had allegedly fired on them after they cordoned his house and called him out.

His family, however, alleged that Abedin was already handcuffed when police took him away “and killed him”. They only learnt about his killing at 6 am when the village headman was informed, they have said.

The Assam Human Rights Commission (AHRC) has taken suo motu cognisance of the killings in police operations and in July has asked for an inquiry into the circumstances. But the report has not yet been submitted by the state government.

Human rights groups believe that the carte blanche given by the CM to the police to deal with such crimes was triggering the violence and the cruelty. Shortly after assuming office in May, Sarma had listed seven key areas where he told the police that they should not show any tolerance.

According to GP Singh, Additional Director General of Police (Law & Order), these areas were cattle smuggling, drugs, human trafficking, terrorism, rhino poaching, crime against women and children, and theft of crude oil, said The Print report. The police will exercise no tolerance when it comes to such cases, pointed out Singh, adding that using a firearm against a criminal is a lawful use of force under certain sections of the Indian Penal Code (IPC).

The most recent Dholpur incident however is turning out to be difficult for the state to live down. Here police personnel reportedly “fired at people’s chests, with the intention of killing them”, said a witness, The Print reported. Moinul Hoque, 33, one of two people who died in Dholpur, had a bullet wound to his chest.

While Sarma, who blamed a “third force” for the situation getting out of hand, did not defend police’s action in Dholpur. However, he repeatedly pointed out how the people attacked the forces, calling the events at Dholpur as an “aberration”.

Also read: How Himanta Sarma convinced BJP leaders he should be next CM of Assam

“We have ordered a CID inquiry. But that doesn’t mean we will not investigate who mobilised 10,000 people there… Police did one wrong thing… but because of that you can’t justify encroachment,” he said, Indian Express reported. Further, he added that about 10,000 had people gheraoed Assam Police, used violence, and then police retaliated.

In early July, Sarma, who also holds the home portfolio, told the Assam Police brass that shooting an accused who tries to flee from police should become the pattern.

A Hindustan Times report quoted him saying that police shouldn’t shoot them in the chest, but law permits the police to shoot them in the leg. “Police in Assam shouldn’t be scared of taking such action (against criminals) but no such action should be taken against innocent persons,” he said, while fending off questions on the high number of suspects being shot down by the police.

A former DGP told The Print that Sarma’s encouragement to police to fire on legs is an indirect endorsement of such brutality. Moreover, he alleged that Sarma seems to connive at selective use of firearms on the targeted ‘criminals’ as well as on so-called anti-social suspects in minority areas.

Assam’s history of tumult to blame?

Many political leaders in the state lay the blame for cop brutality at Sarma’s door. They alleged that his words, decisions and steps are full of communal vengeance surpassing that of even UP CM Yogi Adityanath

Congress MP Abdul Khaleque told ThePrint that shootouts are akin to dictatorship. That they wanted a trial not a shootout since in shootouts, innocents could also become victims.

Human rights lawyer Aman Wadud, who practises at the Gauhati High Court, said law enforcement had changed since Sarma took over, adding that “all he wants to do is propagate the image of being a tough administrator”. One way he signals this is with statements such as shooting in the leg, he said.

Mrinal Talukdar, author of Assam after Independence and Post-colonial Assam (1947-2019), said, Sarma is “sending police a signal with his ‘shooting criminals should become a pattern’ statement”.

“This is straight out of Yogi Adityanath’s rulebook in UP. No elected CM will say something like this in the court of law,” he added. However, some experts argue that the state’s troubled history of insurgency and internal strife have shaped the behaviour of the Assam police.

Assam is not a stranger to police violence. It is a state bedevilled with long-standing problems like insurgency and illegal immigration from its international border with Bangladesh.

During the tenure of another BJP leader, Sarbananda Sonowal, there were 16 deaths at the hands of police and on one occasion of firing in 2016, said the Print article quoting the National Crime Records Bureau (NCRB) data.

Interestingly, Uttar Pradesh too had more civilian deaths in police firing in 2015, nine against Assam’s 7. The state’s death toll due to police firing continued to hover in the top league as in 2016, Assam (16) was second to Haryana (22).

Although the Opposition blames the “dictatorship” in the state under Sarma for this “militarisation” of police in Assam. But the fact is that while the state’s insurgency has ebbed, unfortunately the police conduct hasn’t changed.

Ankur Tamuli Phukan, an academic and activist told The Print that this “trigger happy” nature of police could be traced back to the late 1990s and early 2000s.

According to Phukan, the Assam police battalion guys were trained to behave like the Indian Army against the insurgent group, the United Liberation Front of Asom (ULFA). “This is a case of militarising police. They have been this way through the Tarun Gogoi government as well, but then insurgency was still an issue,” Phukan said. But the insurgency had abated but police continued to behave in the same manner.

According to experts, the Assam Police was dealing with insurgency for 20-25 years and the focus was on developing anti-militant skills. Today, more training will be required to help them transition back to a more civilian style of policing. That will require funding and political will to reverse the change that was put in place.