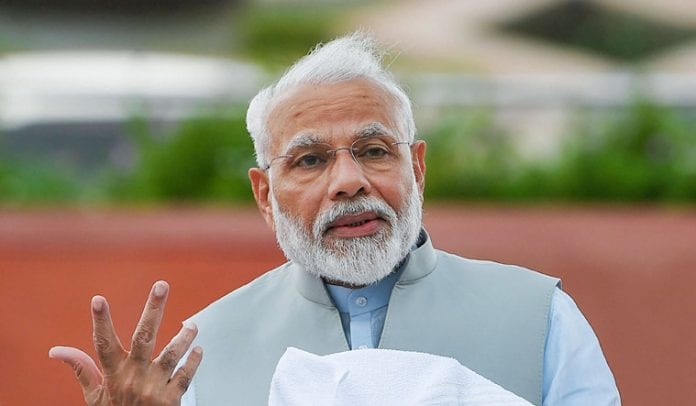 Taking a swipe at the Mamata Banerjee government, Prime Minister Narendra Modi on Sunday (January 12) alleged it was not implementing central government schemes in West Bengal since they do not help “syndicates” or involve “cut money”.

Addressing the 150th-anniversary programme of Kolkata Port Trust, which Chief Minister Mamata Banerjee skipped, Modi said people in West Bengal would not have to miss out on the benefits for long, in an apparent reference to the Assembly polls next year in which the BJP’s victory is expected.

“When there is no syndicate or cut money involved, why would someone implement central government schemes? I don’t know whether they (state government) would give approval for central schemes such as Ayushman Bharat Yojana, PM Kisan Samman Nidhi, but if they do, people of Bengal will be able to enjoy their benefits,” he said.

A few months ago, Banerjee inadvertently admitted to corruption within the TMC when she warned party workers during a meeting to return the cut money if they had taken or “be ready to go to jail.”

This term is meant for a portion of money that is “cut” from the total amount allocated for a government project. The BJP had attacked the state government following Banerjee’s remarks and accused it of indulging in corruption.

The Prime Minister said that he was pained to see that the poor in the state were not getting benefits of the Centre’s welfare schemes. “Eight crore farmers across the country are getting benefited (due to the central schemes). But there will always be pain in my heart (about the schemes not being implemented in Bengal).”

“I will always pray to god for the welfare of farmers and poor patients. May God give them (Bengal government) good sense… However, I have a feeling that the people of West Bengal will not remain deprived of central schemes for long,” he said.

On Sunday, Modi said his government at the Centre was making every possible effort to develop Bengal, especially its poor, underprivileged and exploited sections. He also inaugurated and laid the foundation of infrastructure projects for the expansion and modernisation of the Kolkata Port.

The prime minister on Sunday also rechristened Kolkata Port Trust after Jan Sangh founder Syama Prasad Mookerjee. The chief minister, who was scheduled to attend the port trust programme, did not attend the event. None of the Trinamool Congress ministers was present at the event.

During the 2019 general elections, Modi had consistently attacked Banerjee, accusing her of running a “syndicate raj” in the state.

The BJP tally rose from two to 18 in West Bengal which has 42 Lok Sabha seats, while the ruling Trinamool Congress won 22 seats, down from 34 in 2014.

I get inspiration and energy from you, PM tells children who won nat...