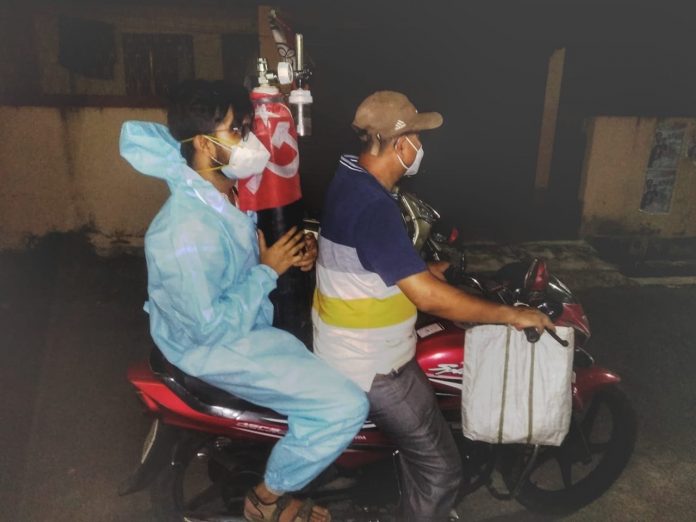 The Red Volunteers operate as an organized collective, networking through social media, friends, neighbourhood networks, and other groups, and various local units of the CPI(M)

The COVID-19 pandemic has ushered in a massive ray of hope on the ground for the Left in West Bengal, thanks to the emergence of Red Volunteers, responding to the emergency and crisis situation in Kolkata and elsewhere.

The Communist Party of India (Marxist) may have scored zero in the 2021 Assembly and the 2019 parliamentary elections in West Bengal, and their top leadership might have lost both credibility and the will to rejuvenate in a state where they ruled unilaterally for more than three decades. These activists are, however, showing the way to a demoralized and defeated Left by becoming real and visible doers in adverse circumstances.

The pandemic, along with mass helplessness and despair, seems to have given the Red Volunteers the impetus, the inspiration, the energy, to carry out a physical campaign on the ground, which has outstretched its limits. It has indeed proved to be an eye-opener for people across the social and political spectrum in West Bengal on what the ‘best of the Left’ is capable of achieving.

For one, they are totally non-sectarian. Two, they are open to reaching out, immediately and consistently, without asking questions or any quid pro quo. And three, they are highly effective, efficient and enterprising. It does not matter who you are, they will reach out and help. And if you are in the margins, their commitment turns into an act of great faith and idealism.

For instance, when a blood thinner, critically needed by a COVID-19 patient, went out of stock in Kolkata, his friends searched chemist shops across the city. The medicine was just not available.

A Red Volunteer near Mukundpur in South Kolkata, who had earlier delivered medicines to the patient, came to know about this ordeal. He tried scores of chemist shops, across Kolkata, personally enquiring from chemist outlets near big hospitals every day in the morning and evening, spending several hours. He was unlucky. But he kept at it.

A full-time professional in an online retail venture, he would squeeze in time to take his scooter and travel across Kolkata looking for this medicine — it became a kind of passion for him. Even while he worked as a volunteer till very late in the night, sometimes past midnight. “My heart bleeds to see old people standing in a queue for long hours looking for medicine,” he said.

Finally, he located a chemist way beyond the airport in a small locality outside Kolkata, where another Red Volunteer found the medicine. So, his friend drove his bike for four hours, to and fro, to deliver the medicine to the patient. Something impossible was achieved, indeed, by sheer willpower and relentless effort. Besides, it showed how they valued the medical need of the patient; it was truly an act of stoic commitment and great humanism.

Red Volunteers operate as an organized collective, networking through social media, friends, neighbourhood networks, and other groups, and various local units of the CPI(M). Some are working through their own areas and neighbourhood, while others are dedicated full-time. And this network of reaching out to patients and those who need medical and other forms of help is done with a hands-on approach, functioning smoothly and diligently, with no hiccups, 24×7.

“We do it because we must do it. We have to do it. There is nothing more to it. We are not doing philanthropy or social work. We do it because it is necessary at this time, it has to be done; because, otherwise, we cannot sleep peacefully,” said a Red Volunteer.

The process has been made so perfect and streamlined that once they are tipped off, the patient and their families immediately start getting phone calls from volunteers. The volunteers in the neighbourhood join in to help: food, groceries, medicine, ambulance, transport, oxygen, counselling, doctors, hospitals. This is huge moral, physical and social support in an emergency – especially for those who have neither financial resources, nor are well-connected.

Incredible stories are being told all over about the Red Volunteers, giving their best in impossible conditions. In heavy rain, they would ride a cycle-rickshaw to deliver oxygen, because the bike would stop in the water. If there is an old couple living alone, they would take them to the nearest hospital using their own vehicles. If beds are empty in government hospitals, they would organize transport and admission. Whether the call for help is desperate or simple – they are acted upon with equal intensity and commitment.

The most important dimension is that there is no sectarian feeling among Red Volunteers. They have helped local BJP workers, Trinamool supporters, and others. This big-hearted approach of the brave-hearts, risking their own life, has truly endeared them to the people.

Red Volunteers are predominantly driven by the youth and students’ wings of the CPI(M), the DYFI and SFI, but they are open to all those who are ready to pitch in. In that sense, many of their committed workers are people from across the ideological spectrum, including those who just want to do something to concretely help while the pandemic ravaged society during the second wave.

And though Bengal was much better off in terms of the mass despair and deaths, witnessed for instance in Delhi, UP, or Gujarat, and it did not face a massive scarcity of beds or oxygen, the Red Volunteers pitched in with an amazing and steadfast relief network on the ground, compensating for the lack of the government machinery in several places, especially in remote areas and villages. And this phenomenon was witnessed across Bengal, from Asansol to Burdwan to Cooch Behar and North Bengal.

Indeed, the grassroots efforts of the Red Volunteers have now moved beyond the threshold of COVID-19 and the crisis it unfolded. They have now become social scaffolding to whom people are reaching out for all sorts of help and advice. For instance, they are helping in repairing roads that have broken down during the monsoon in inaccessible terrain.  Indeed, in Khejuri in East Midnapore, they joined hands with the villagers to fix a broken-down road – because, during medical emergency, they wanted the road to be functioning.

The Pakuria-Mansinghber and Pakuria-Kasaria roads were in a broken-down condition. The volunteers discovered it during the course of their relief work — it was difficult for a vehicle, a two-wheeler or ambulance, to cross this road. And hence they organized the villagers and fixed the road. Even the local panchayat led by the Trinamool Congress deeply appreciated their efforts, promising to build a pucca road after the monsoon.

Of late, the social media pages of the Red Volunteers are flooded with appeals for suggestions, counselling, medical and other help. Some want to know the name of a good doctor or specialist, some say she and her ailing mother are trapped in the rain, what to do, some say that he is jobless and can’t pay rent, while others seek advice on a given medical condition. They almost immediately get considered responses and support from the Red Volunteers, including doctors.

Predictably, the valuable and selfless work of Red Volunteers, beyond the politics of the CPI(M), has drawn deep appreciation of civil society and media. Consequently, they are taken seriously and given whole-hearted support.

Several social organizations have come out to help them in various ways, including financially. The alumni association of BE College, for instance, has offered medical insurance to about 159 frontline Red Volunteers across certain districts. Each volunteer has been insured for two lakh rupees. The alumni association of the Scottish Church College in Kolkata has formed a financial corpus of eight lakh rupees to help the people. Others have pitched in with smaller sums. The National Medical College alumni donated Rs. 75,000 to the SFI for the volunteers’ work.

Indeed, in a state where the Left is on the backfoot, and the right-wing has become the main opposition, the Red Volunteers are trying to turn the tide, risking their lives, working tirelessly and selflessly, and displaying great courage and humanism in extremely difficult circumstances.

Amit Sengupta is Executive Editor, Hardnews and a columnist, currently based in Kolkata