The ₹10,000-crore rehabilitation package announced by Mamata Banerjee on Tuesday to kick-start coal excavation at the world’s second largest coal block in Birbhum may prove to be a turning point in her political career, boosted by anti-land acquisition movements.

In a departure from the previous land acquisition model of the state, the package announced in the assembly for land losers affected by the coal project includes alternate land, houses, jobs to at least one person from each family, shifting charge, maintenance allowance and cost of cattle shed among others.

The chief minister also reiterated that there would be no forcible acquisition of land as was allegedly done by the erstwhile Left Front government for the Tata Motor’s Nano project in Singur.

The package and the chief minister’s assertion are indicative that the new model would be to woo the land owners with lucrative deals to avoid any confrontation, unlike the earlier attempts to acquire land even by Mamata Banerjee’s government. 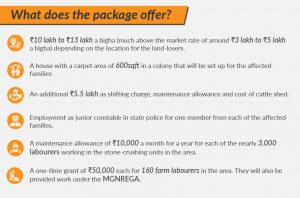 The TMC government had a major faceoff with villagers when it had tried to acquire, allegedly by force, around 14 acres of land for a power grid project in Bhangar, near Kolkata, in 2013. The stir against the land acquisition became so intense in 2017 that the area comprising 12 villages remained almost like a liberated zone for over a year until the state government struck a compromise deal with the protestors, downsizing the project.

The Trinamool government, which came to power in the state in 2011, riding on the anti-land acquisition movements in Nandigram and Singur, also found itself on the wrong side at Loba in Birbhum district in 2012. A violent movement by the land-losers there had forced the state government to shelve the proposed open-cast coal mine project to be undertaken by the Damodar Valley Corporation (DVC).

The central public sector undertaking offered a price of ₹14 lakh per acre to purchase 3,600 acres. But the land owners rejected the offer saying the rate was less than a third of the market price in the area.

Due to similar local resistance the coal exploration at the Deocha Pachami coal block allotted to the state by the Centre in September 2019 could not be started yet.

The villagers, mostly tribals and scheduled castes, had organised a series of protests and demonstrations against the project claiming it would lead to eviction of several villages and destruction of forests, integral to tribal customs and ways of life.

The coal block is spread across 3,400 acres at Mohammad Bazar block of Birbhum district and has an estimated reserve of 2.1 billion tonnes of coal.

According to the state government’s assessments, the mining project has the potential to act as an engine of economic growth for the entire south Bengal and provide direct and indirect employment to at least 1.5 lakh people and will attract an investment of around ₹35,000 crore.

The execution of the project will affect 21,000 odd people residing in 4,314 houses in 12 villages located in 2,400 acres of land. The remaining 1,000 acres of land is completely owned by the state government.

As a controversy over the land acquisition was the last thing the TMC would want ahead of the 2021 assembly elections, the state government had pressed the project’s pause button in the face of the agitation against it that started getting momentum in September last year.

After returning to power for the third term, the Mamata Banerjee government quickly launched an outreach drive to win the trust of the local people to resume the project, which is crucial to Bengal’s economy as the state government is planning to enter commercial coal mining selling about 30 per cent of the outputs from the block in the open market. The project will also cut the need for regular purchase of coal from outside, thus saving lots of money for the cash-strapped state government.

As part of the drive, since June this year, Birbhum district police have launched six special projects in and around the site of the proposed coal mine.

The projects include special health and eye check-up drive, providing clothes and other support to the poor, community schooling by police to reduce dropouts, professional training or career guidance to the tribal youths, football coaching and promotion of local culture by distributing musical instruments to tribal dance troupes.

“Our purpose is to send a message to the people of the area that the police are their friends,” superintendent of police Nagendra Nath Tripathi told the media.

The local residents see a larger motive behind the police initiatives. “The people of the area are not yet ready to relocate from their ancestral homes for the project. Hence, the government is trying to lure them with doles. But I don’t think these measures will succeed in convincing people to give up their land for the project which will only bring misery to the people of the area,” said Khokhon Mardi of the Project Affected People’s Association (PAPA), an umbrella organisation of villagers to be affected by the coal exploration.

Earlier, the state-owned West Bengal Power Development Corporation Limited, the nodal agency for the execution of the coal mine project constituted a nine-member committee headed by noted Bengali actor Parambrata Chattopadhyay to liaison with local villagers.

“There is a strong need to intensify social work activities in areas where WBPDCL is expected to start work. Such activities would help in gaining the trust and building confidence among the local residents for smooth operationalisation of pre-mining activities,” read an order issued by the corporation announcing the formation of the committee.

“There is a need for holding continuous dialogues with the residents and their community leaders in a dynamic feedback system so as to formulate action plan towards developing local social and physical infrastructure through social welfare activities in due consultation with the stakeholders in the vicinity,” the order, a copy of which has been accessed by The Federal, said.

The state government is leaving no stone unturned to bring the project back on track as it is very crucial to Bengal’s economy, said a senior official. He said the state government is planning to enter commercial coal mining selling about 30 per cent of the outputs from the block in the open market.

Besides, the project will also cut the need for regular purchase of coal from outside, thus saving lots of money for the cash-strapped state government and also provide jobs.

Many TMC leaders admit in private that Mamata Banerjee herself is taking huge political risks to ensure the success of the project.

They say if the rehabilitation package, rolled out by her, is able to secure land for the project it will set a new benchmark for land acquisition not only in the state but also in the country.

“The Central government cannot even think of giving such an all-encompassing rehabilitation package. It will take care of all the needs of the land-losers. No other government will give such compensation. It will ensure all-round development of the people of Deocha-Pachami area,” said TMC’s Birbhum district unit president Anubrata Mondal.

However, if the package is rejected, it will be a huge setback for the Mamata Banerjee government, which has an anti-industry image. The successful execution of this project by peacefully acquiring land would help in the image makeover of the TMC government, clearing decks for future major projects in the state.

Politically too it is important as of the 21,000-odd project affected people, 9,034 belong to ST communities and 3,602 belong to SC communities. Any false move in acquiring land would antagonise these two influential communities who together constitute over 29 per cent of the state population.

As of now the government’s overtures did not get any enthusiastic response from the local villagers, who say the package was prepared unilaterally without taking them into confidence.

“The people of the area were completely in the dark about the government’s move. No discussion was held either at the panchayat level or the block-level. People’s views were not taken while formulating the package,” said Sunil Soren, secretary of the Birbhum Adibasi Gaota, the apex body of the state’s ST community.

Even Khokhon Mardi of the PAPA said they were completely unaware of the package and even was not informed that the government was planning to expand the project beyond the 1,000 acres of land owned by it.

To discuss the package and to decide about their future course of action a meeting of the villagers has been convened under the banner of the Gaota on next Sunday (November 14),” Soren said.