Kolkata’s first coronavirus patient, the teenage son of a top bureaucrat of the state, is facing public shaming for skirting medical advice and refusing to quarantine himself despite his friends testing positive for the infection in London.

He and his mother, who is an IAS officer, are being ‘named and shamed’ on social media along their photos, providing fresh content to meme makers. Respecting his privacy and on ethical grounds, he is not named in the report. 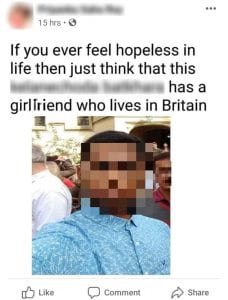 The issue of public shaming assumes significance in the backdrop of the mental condition that a patient undergoes during isolation, and even the case of suicide of a suspected patient in Delhi adds to how such issues should be dealt with, keeping in the mind the panic and trauma the infection is causing.

The 18-year-old patient, a student of Oxford University, reportedly refused hospitalization following his return from London and continued to come in contact with several others, thus exposing them to the virus.

His mother had gone to her office at the state secretariat Nabanna, which is the citadel of Chief Minister Mamata Banerjee, allegedly after coming in contact with her infected son. He is currently kept in isolation and his condition is stable.

This exposed a lax in the system as Netizens alleged the boy abused his mother’s position to skirt medical advice, prompting the chief minister to rap the family, saying, “You can’t claim VIP status and avoid COVID-19 tests.”

As reports of his test results became known, Netizens posted his photos on Facebook, identified him and his mother by their names, and shared memes using vulgar and explicit language. This involved comments on his looks, and questions like, “how could he have a girlfriend in the UK?” Given his mother’s position, allegations of “being born with a silver spoon” followed.

This comes amid reports that a 35-year-old suspected patient jumped to death at Delhi’s Safdarjung Hospital on Wednesday, triggering concern about the mental conditions of patients living in isolation wards.