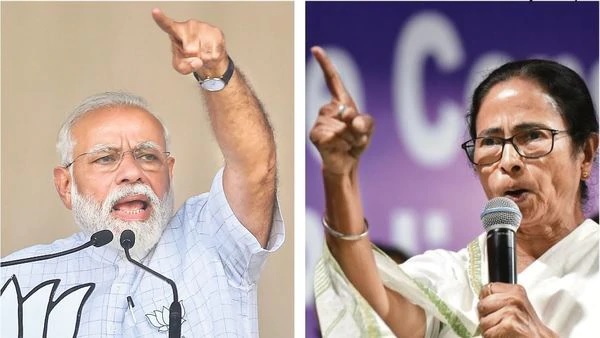 In a haste to weaken the Trinamool Congress by ‘indiscriminately’ poaching its members, an overzealous BJP has now been left red-faced after many defectors flocked back to the TMC. What’s more, the saffron party old guards are now asking the top leadership to revise its recruitment policy.

At least 23 councillors of two municipalities, who had defected to the BJP a little more than a month ago, have returned to the TMC fold in the past seven days.

After his ‘homecoming’, Roy said they were feeling ‘stifled’ and ‘unwelcomed’ in the BJP.

What is more significant in this defection drama is that the Kanchrapara and Halisahar municipalities in West Bengal’s North 24 Parganas district fall within the Bijpur Assembly constituency that is regarded as a stronghold of BJP’s recruiter-in-chief Mukul Roy, himself a turncoat from the TMC.

The constituency is represented by Mukul Roy’s son Subhrangshu Roy, who joined the BJP from the TMC after the Lok Sabha results were announced. Kolkata mayor and municipal affairs minister Firhad Hakim claimed that more such defectors would soon return to their parent party.

Reverse defections, however, are not the only embarrassment faced by the BJP over its recruitment drive. Last month, BJP supporters demonstrated outside the houses of two panchayat-level leaders, who had switched over to the BJP from the TMC, in East Midnapore and Cooch Behar districts, accusing them of taking bribe from local residents to provide benefits of government’s welfare schemes.

Following the incidents, BJP national president Amit Shah was forced to direct the party’s state unit to carefully screen the antecedence of the new recruits.

The party, however, seems to have failed to do a proper background check of the newcomers. It was evident when earlier this month it welcomed into its fold a ‘sidelined’ TMC leader of Midnapore, Sukumar Bhuian, whose name was once linked with a bank scam.

Incidentally, Bhuian is a habitual party-hopper who is known for switching parties thrice in the past eight years. He started his political career from the Forward Block. From there he had gone to the BJP only to desert the party to join the TMC. Now, from the TMC, he is back to the BJP for a second time.

The TMC has not missed the opportunity to take potshots at the BJP over its new catch. “We had benched him after his name figured in a bank scam. Now, the BJP being a party with difference takes into its fold all discarded, tainted leaders,” said TMC’s Midnapore district president Ajit Maiti.

Earlier, the induction of TMC MLA from the Birbhum district Manirul Islam also raised several eyebrows both within the BJP and outside. There were several allegations of intimations and violence against Islam.

The BJP’s Birbhum district and the RSS openly expressed their unhappiness over Islam’s induction. Islam was inducted into the BJP at the behest of Mukul Roy.

Many old guards like Rantidev Sen Gupta, who unsuccessfully contested the Lok Sabha elections on a BJP ticket from Howrah, raised their voice against roping in TMC leaders indiscriminately.

The old guards blamed Roy and his new recruits for the current situation. Their sentiment was articulated by the Swastika, the RSS mouthpiece in Bengal.

“To dislodge the TMC, outsiders with no credibility are inducted (into the NJP) indiscriminately. They are like rats leaving a sinking ship,” the RSS mouthpiece said.

In another issue the magazine did a cover story last month titled ‘To what extent will BJP be able to control benojwol (the flood water)’.  In the article, it questioned the political far-sightedness of Mukul Roy, asking what was the need to induct Islam, who “changes colour like a chameleon”.

Swastika went on the claim that the problem was triggered in the BJP because Mukul Roy had never led a cadre-driven political party.

Islam, meanwhile, is kept at bay in BJP’s party activities. His name did not even figure in the list of party’s new MLAs, submitted to Assembly speaker Biman Bandopadhyay.

As the tussle between the BJP’s old guards and newbies gain prominence, BJP’s Bengal in-charge Kailash Vijayvargiya said the party has put in place several screening mechanisms to prevent any ‘benojwol’ entering into it.