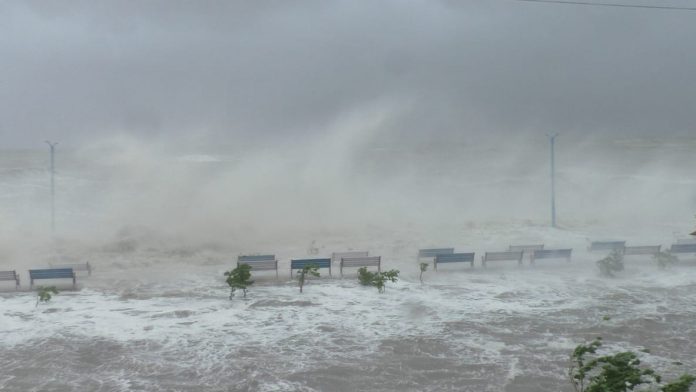 The West Bengal government is considering building natural defences to slow river flow and reduce flooding as a cost-effective means of preventing frequent breaches of river embankments, one of the biggest problems in coastal districts of the state.

The irrigation department plans to implement a Chola-era method of building mud dykes with grass shields to prevent breaches, even as allegations of misuse of funds for building embankments threaten to cause political ructions.

The department has started a feasibility study to plant vetiver grass along the dykes. The deep roots – two to four metres in depth – of the vetiver grass help bind soil and prevent erosion, experts say. Moreover, when planted in rows to form hedges, the grass slows down water flow by acting as a barrier, thus reducing the erosive power of the deluge.

This method of protecting embankment was first used during the time of Chola King Karikala (190 AD), said Babulal Mahato, an alumnus of the Bidhan Chandra Krishi Viswavidyalaya (Agriculture University), Kalyani. Mahato was the brain behind the implementation of a pilot project to plant vetiver grass (Chrysopogon zizanioides) along the Jalangi, Bhagirathi and Hooghly river embankments in Nadia district in 2015.

Impressed by the success of the project, Chief Minister Mamata Banerjee, in a meeting to review the impact of Cyclone Yaas last month, asked officials of the irrigation department to implement it across the state.

Policymakers and experts have been forced to think out of the box after embankments were breached in about 134 places by storm surges triggered by Cyclone Yaas on May 26. Many stretches of the breached embankments were repaired after Cyclone Amphan, which struck the state in May last year.

Taking serious note of the breaches, Banerjee criticised two former ministerial colleagues who have now switched over to the BJP, and advised the department to go for a nature-based solution to deal with the problem.

“We cannot go on spending crores of rupees every year in building and repairing embankments. We have to look for an alternative solution, like planting mangroves or vetiver grass,” she reportedly told the officials, “expressing dismay” over the functioning of the department that for a decade was under Rajib Banerjee and Suvendu Adhikari, the two ministers.

An inquiry is likely to be ordered over the misuse of funds meant for embankment construction during the tenure of the two ministers.

“No one will be spared. All those responsible for the substandard works will be held accountable. For the substandard work done under them lives of several people were put to risk,” said TMC leader Abhishek Banerjee after visiting the cyclone affected areas of East Midnapore district on Thursday.

He said funds allotted for building embankments were “misused” in the district, where thousands of people were rendered homeless due to flooding caused by Cyclone Yaas.

Reacting to the allegations levelled against him, Adhikari said he was not to be blamed for any wrongdoing as none of the ministers in Mamata Banerjee’s government was allowed to work independently.

Rajib Banerjee was irrigation minister from 2011 to 2018 while Adhikari held the portfolio from 2018 to December last year.

After Cyclone Aila hit the state in 2009, the World Bank had allocated ₹5,032 crore to the Sundarbans Embankment Reconstruction Project to strengthen and rebuild river embankments in the delta, a UNESCO World Heritage Site.

“Till Cyclone Amphan struck in 2020, only little fund from World Bank could be utilised for making a five-metre-high and 35-metre-wide durable concrete embankment, at an exorbitant expense of nearly ₹1.5 crore per kilometre,” the South Asian Forum for Environment (SAFE) said in its Yaas impact assessment report.

Many of these embankments were breached during the cyclone, flooding homes, destroying crops and ponds raising questions about the feasibility of the concrete embankments, said Prasanjit Mandal of Sunderban Foundation.

“A rapid assessment of 38 breach points in embankments reveals that the engineered design has either failed to withstand the load of accumulated water or the water pressure at the bends on the river. Perforations made on the embankment for saline water intake for prawn farming have further weakened the embankments,” SAFE’s report said.

Experts like Dr Dipayan Dey, chair (research and planning) at SAFE, said as rivers constantly change course, concrete embankments could not be a permanent solution. He advocated for a natural solution, also mooted by the state government.

“The solution has to be based on bio-engineering,” he said, adding that merely planting mangroves or vetiver grass would not be enough. “A buffer zone of 600 to 700 foot from the river should be created for the plantation of vetiver grasses and mangrove trees. The mud dykes should be built beyond the buffer zone,” Dey suggested.

Creating such a buffer zone will require relocation of population settled near the river banks. “Either the government will have to go for a long-term solution based on bio-engineering or continue with the existing cycle of providing for reliefs and rehabilitation after calamities strike,” Dey added.

Roots of vetiver plants have medicinal values while the grass can also be used as animal fodder, and hence the villagers can be encouraged to take up the plantation of vetiver as an alternative means of income and opt to relocate beyond the buffer zone, he added.