A right-leaning think tank comprising many BJP leaders and supporters has lined up a series of photo exhibitions-cum-discussions across West Bengal to weave a Hindutva narrative around neighbouring Bangladesh’s liberation struggle, deemed as a secular uprising against Islamic fundamentalism.

The event has been very suggestively christened the ‘Bangladesh Files’, inspired by the recent Hindi blockbuster Kashmir Files, which whipped up anti-Muslim sentiment over the plight of Kashmiri Pundits during the height of insurgency in the northern state in the early 1990s.

Apart from the nine-month-long Bangladesh freedom struggle, the event, organised by a group called the Paschimbanger Jonno (‘For West Bengal’), will also try to pictorially depict the alleged atrocities against Hindus meted out during the infamous Noakhali riots of 1946.

“The Bangladesh Files, which has been obviously named so to draw a parallel with the killings of Hindus in Kahsmir, is an attempt to tell the world how systematically Bengali Hindus have been massacred in Bangladesh since the Noakhali riots of 1946,” said Mohit Roy, West Bengal BJP spokesperson and the brain behind the exhibition. 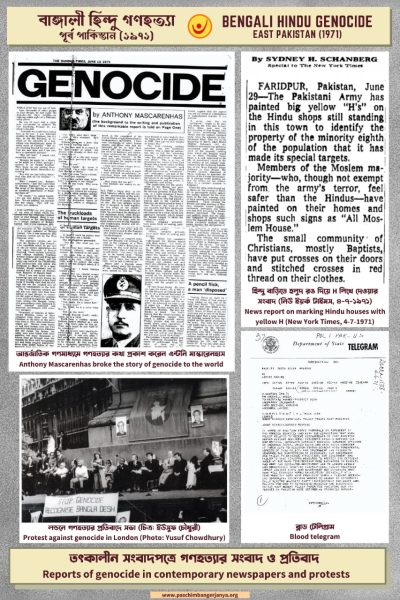 A similar event was organised by him in Kolkata last December, ahead of the Assembly elections in five states including Uttar Pradesh. Senior BJP leader Suvendu Adhikari inaugurated the event then.

“The mass killings of Hindus in the then East Pakistan in 1971 has been wrongly depicted as a genocide against all Bengalis. Of the estimated 30 lakh people killed during the period, only around 20-25 thousand people were Muslims. It was essentially a genocide of Hindus, and not a secular uprising as has been a popular perception,” Roy claimed, a contention rubbished by those who had a first-hand experience of the development.

“It will be a travesty of truth if our Liberation Struggle is projected as mere communal violence,” said Manindra Kumar Nath, founding general secretary of the Bangladesh Hindu Buddhist Christian Oikya Parishad, a leading minority-rights group of Bangladesh. “Bengalis of all sects and religions rallied behind Sheikh Mujibur Rahman, the leader of the movement, inspired by the secular spirit of the liberation movement.”

The subsequent dwindling of that secular spirit of liberation in Bangladesh resulted in atrocities against minorities in the country, which over the years forced many Hindus to flee to India as refugees, he lamented.

Nath’s father and uncle were killed in the movement. “We did not even get their bodies. Similarly, many Bengali Muslim families lost their dear and near ones during that horrific period,” said Nath, who was in his early 20s then.

He said it was the Pakistani army that tried to give a communal colour to the movement to weaken it by creating a Hindu-Muslim divide.

His view is endorsed by Abhijit Dasgupta, the Kolkata-based author of a book titled Through my Eyes: The Birth of Bangladesh. Dasgupta extensively covered the Bangladesh liberation movement as a journalist for The Statesman.

“I was personally privy to many incidents where, in fact, Muslims saved the lives of Hindus. When the Pakistani army wanted to kill the entire Hindu population at Chingrikhali village in Khulna, it was their Muslim neighbours who came to their rescue. There are many such instances,” Dasgupta recalled, debunking the attempt to see the struggle from a narrow Hindutva prism.

The ruling Trinamool Congress said the exhibition is a renewed attempt by Hindutva ecosystem to create communal polarisation in Bengal, where the previous such attempts, including the recent Kashmir Files, failed to evoke any response.

“After the BJP has failed to make any electoral impact in the state, its fringe elements have been once again activated to create communal tensions in the state,” said Mukul Chandra Bairagya, a leader of the TMC’s refugee cell.

Organisers of the exhibition are, however, determined to establish their narrative of the struggle. “We are not bothered by such accusations. We are absolutely determined to tell the story of Bangladesh, as we see it, to the people of West Bengal, particularly the younger generation,” Roy added.

Clearly, Bangladesh will continue to be the central theme in the Bengal Hindutva project.