The Odisha government and the Centre are locked in a political showdown over the 11th century Lingaraj Temple dedicated to Lord Shiva in Bhubaneswar.

The Narendra Modi government has blocked the Biju Janata Dal-led government’s Shri Lingaraj Temple Ordinance, 2020. On March 23, a letter was sent by the Ministry of Home Affairs (MHA) to the Odisha Governor’s office and it was forwarded to the chief secretary on March 31. The Centre has sought clarifications from the state government over certain clauses of the ordinance. 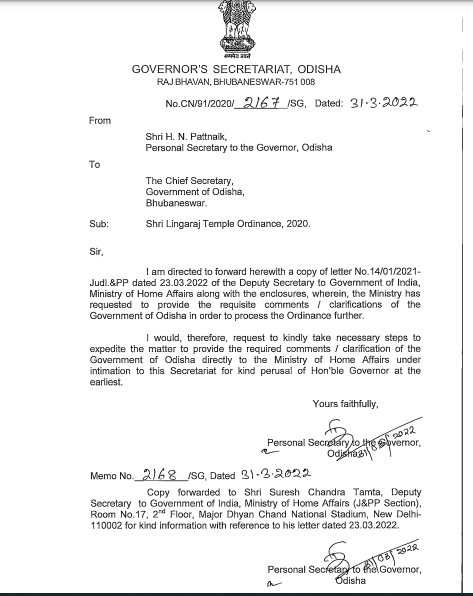 What is the issue?

The Odisha government wants to bring the Lingaraj Temple and its associated eight temples under a special law along the lines of the Shree Jagannath Temple in Puri. The ordinance, which was approved by the state Cabinet in December 2020, has provisions for forming a 15-member committee with a senior Hindu IAS officer to be appointed as its chief administrator.

The temples and tanks, seeking to be covered under the ordinance, are centrally protected monuments. The ordinance has faced objections from the Ministries of Culture and Rural Development (Department of Land Resources).

🙏Take a look at the mesmerizing look of Lord Lingaraj Temple in #Bhubaneswar, #Odisha

The state government had sought the Centre’s nod for the ordinance.

However, the Union government has said that the ordinance is outside the “legislative competence” of the state legislature as it could lead to a conflict with the Ancient Monuments and Archaeological Sites and Remains Act, 1958 (AMASR Act).

What does Odisha government want to do?

In December 2019, the Odisha government had announced a development plan for the temple and its peripheral area in Bhubaneshwar. The 66-acre “Ekamra Kshetra” development plan was launched to preserve the heritage and development of the nine sites and their nearby areas at a cost of around Rs 700 crore, according to a report in Indian Express.

The Lingaraj Temple is being governed under the Odisha Hindu Religious Endowment Act, 1951.

As per #LingarajTempleAct, a Managing Committee of 15 members will be formed and empowered to manage affairs of the temple including seva-puja & nitis. The Committee will administer the temple & its properties including temples outside the premises & Mathas.#LingarajMahaprabhu pic.twitter.com/ZUDsntc8HX

What did the Centre say?

In the letter, MHA wrote that new constructions are not allowed in the prohibited area (100-metre zone of the protected monument).

“These centrally protected monuments are governed by the Ancient Monuments and Archaeological Sites and Remains Act, 1958. As per the said Act new constructions are not allowed in prohibited area (100 metre zone from protected monument). Further, 200 metre area beyond prohibited area has been declared as regulated area where permission from competent Authority on recommendation from the National Monuments Authority is required to undertake construction-related activities including repairs,” the ministry said.

Further, it stated that the Archaeological Survey of India (ASI) alone is responsible for conservation and preservation of 12 central protected monuments.

“ASI is responsible for the conservation and preservation of these 12 centrally protected monuments. Certain clauses of the ordinance also relate to conservation and repair of the Temples/Tanks. Such conflict is not in the interest of maintaining these centrally protected monuments in their original form for posterity. As such the dual administrative authorities will results into continuous conflict,” it said.

“If such repairs are taken up by non-expert agencies, it will be difficult to maintain the centrally protected monuments in their original form. Modern structures within the temple complex impacting the aesthetics of the temple have already been constructed by the temple administration/state government in violation of the AMASR Act,” MHA added.

State minister Ashok Chandra Panda has questioned the Centre over “different rules” for different temples in the country, pointing out to the works carried out at temples in Kashi, Somnath and Kedarnath.

“Is AMASR Act being followed properly at Kashi Vishwanath, Somnath and Kedarnath temples? During landslides, construction works were carried out in the prohibited areas of these temples to extend different kinds of facilities to the devotees visiting these shrines. Then why a different kind of rules is set for the developmental activities around Lingaraj temple?” Panda was quoted as saying by Odisha TV.

“Earlier, the state government has clarified on the Lingaraj Temple ordinance to the Centre over video conferencing twice. If the Centre had any doubt over it, the State could have clarified on it once again,” he added.

Odisha Finance Minister Niranjan Pujari defended the ordinance by saying, “A special law for the management of the Shri Lingaraj Temple will ensure its better functioning, quality facilities to the pilgrims, devotees and worshipers. It will also empower the committee to safeguard the properties of the ancient temple.”

It is worth recalling that in 2017, PM Narendra Modi visited the Lingaraj Temple and shared photos of him praying, on Twitter. “Prayed at the Lingaraj Temple in Bhubaneswar. The magnificence of the Temple and Temple Complex leaves a lasting impression on the mind,” he wrote. This photo was the “most popular photo shared by a leader in 2017”, according to the PMO.

Prayed at the Lingaraj Temple in Bhubaneswar. The magnificence of the Temple and Temple Complex leaves a lasting impression on the mind. pic.twitter.com/ofoXs8rltr

What did Nirmala Sitharaman say in her Budget...