“I am sure you can give shape and direction to a new autonomous institution which is being set up,” suggested then Odisha chief secretary DP Bagchi to his colleague in the state bureaucracy one morning in 2001. “I will try sir,” replied senior IAS officer Aurobindo Behera. 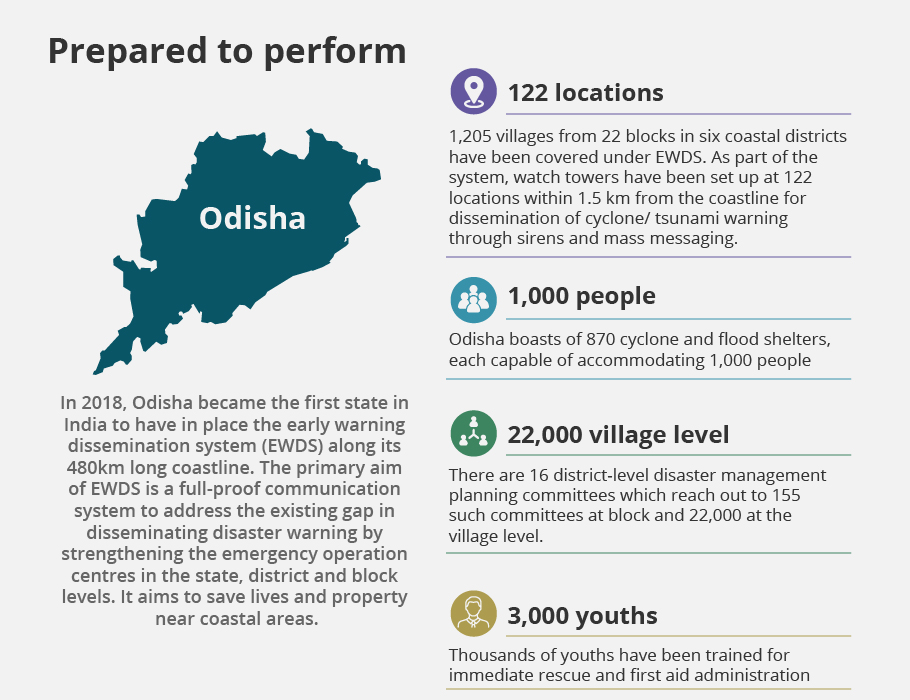 Over the years, the OSDMA has gone from strength to strength. And in the process Odisha has carved out a standalone identity as the best-equipped state to manage disasters. It’s considered as a role model, in India and internationally as well, for efficient preparedness and swift response to disasters.

Last week, there were apprehensions as to how the government would manage the severe tropical cyclone Yaas ahead of its landfall in Balasore district. For, the state was in the grip of COVID’s terrible second wave, with daily infections hovering over 10,000 cases. However, much to everyone’s surprise, around 6 lakh people were evacuated from possible danger pockets to cyclone shelters. Interestingly, COVID norms of social distancing and use of masks was ensured to a large degree.

Lessons from past cyclones and OSDMA

However, the coastal state has not only managed the disasters efficiently, but has also succeeded in reducing fatalities to double digits. While Phailin affected over 1.1 million people and caused damages of approximately ₹4,240 crore, the ‘rarest of rare’ summer cyclone Fani’s gusty winds of close to 200 km wreaked havoc in 14 districts, resulting in an estimated damage of over ₹24,176 crores. Armed with the India Meteorological Department’s (IMD) accurate cyclone warning system well in advance, the state carried out massive evacuation measures before cyclones. In case of Fani, the total evacuation number crossed a record 1.4 million. The death toll due to Fani stood at 64.

It wouldn’t be wrong to attribute the entire credit for Odisha’s success in managing cyclones and other natural calamities including flood and draughts to OSDMA.

“Every disaster should be seen as an opportunity for building back better and Odisha has done exactly the same after the 1999 Super Cyclone. In many ways, the OSDMA has influenced and redesigned the disaster management architecture of the country,” says well-known disaster management expert NM Prusty.

Looking back at OSDMA’s nascent days, Behera says, the specialised outfit registered under the Societies Registration Act, was meant to cut short bureaucratic red-tapism and remain flexible. A lot of emphasis was put on both, hardware-civil construction including roads, specially designed multipurpose cyclone shelters, procurement of machineries and equipment, and also software-human resources development, training of government and NGO personnel and most importantly, communities on the ground. Incidentally, OSDMA’s community based disaster management became a pioneering initiative.

“The objective was to make it a nodal and coordinating agency for disaster management with a lot of emphasis on preparedness to face disasters and create confidence among the people and the government machinery that we are well equipped,” Behera says. He adds that OSDMA is meant to be a nodal agency, working all the time with various government departments and district-level administrations.

“Any institution-building gives a lot of satisfaction. Because, if the foundation is strong, its utility and sustainability is ensured and assured as well,” he says.

Incidentally, OSDMA was born at a time when Odisha was still labouring to limp back to normalcy post the devastations of the 1999 Super Cyclone, which killed 10,000 people while the magnitude of loss to livelihood and destruction was unimaginable.

“In Bhubaneswar we couldn’t communicate with each other, while Jagatsinghpur, the worst affected district, barely 70 km away, was cut off from the state capital for seven to eight days,” remembers then revenue secretary, Jugal Mohapatra.

Shaken by the cyclone, the government’s top machinery decided that the disaster wouldn’t be allowed to happen again. Mohapatra says, with Odisha being prone to frequent natural disasters including floods and droughts, it was decided to have a specialized outfit to handle challenges arising out of such calamities. “It was a collective decision and the aim was to build up long-term resilience from all disasters,” says Mohapatra. Both, Behera and Mohapatra, are retired, now.

Though the state had the special relief commissioner, his job was limited to relief, restoration and disbursement of funds to different departments for repair works; post 1999 disaster, the consensus opinion was to widen the scope to disaster preparedness and resilience.

Initial steps not a cakewalk

However, OSDMA’s journey ahead was far from being easy. There were immense challenges. Financing the initiative was one of them. “We were almost broke, there was absolutely no money. We were negotiating with the World Bank for disaster recovery support,” Mohapatra shares.

According to Behera, the state utilised ₹300 crore (assistance) from the global bank in activities like building of specially designed multipurpose cyclone shelters, strengthening of river embankments and laying roads. In the entire work, emphasis was given to speed of execution, procurement and quality control.

And it was just the beginning.

Incidentally, barely in less than four months after the Super Cyclone, there was a regime change in the state. The Congress government headed by Giridhar Gamang was replaced by a fresh face in Odisha politics heading an infant regional outfit, the Biju Janata Dal (BJD). Soon, Mohapatra was Naveen’s principal secretary.

“The chief minister gave the bureaucracy the mandate to build up a system to insulate the state from natural disasters. It was a technocratic exercise and there was no meddling from any quarter,” says Mohapatra, adding, “When the chief minister is backing the initiative, it is not difficult to move ahead.”  According to Behera, the chief secretary and OSDMA’s governing body chairman Bagchi allowed him the flexibility to select his team and take quick decisions. “It was presumed the CM’s tacit support was always there,” agrees Behera. He says that he got all support from relevant departments: home, finance and revenue.

It is widely held that one of the biggest achievements of Naveen during his over two-decade-long uninterrupted rule has been in making Odisha the best disaster-prepared state in India. It has ensured him rich political dividends during polls, too.

Prusty claims the ‘Zero Casualty’ approach of Odisha government created global best practice norms for disaster preparedness and response not only in the country but internationally as well.

Having seen through the initial huddles, OSDMA progressed ahead with a mission. It prepared disaster management plan for the state and nudged all departments and district administrations to prepare similar plans. Every year the plan is updated. While, every disaster’s pattern and nuances were studied and the response processes documented, a continuous and massive capacity-building exercise at different levels was undertaken. Maximum care was taken towards strengthening the capacity building among the first responders – communities and in particular the youth. In the process, a book on disaster management for school students was published and introduced in the curriculum for the first time in the country. Later, NCERT did the same in its textbooks.

Also, the Odisha Disaster Response Force (ODRAF), a specialised and dedicated outfit for immediate rescue and relief operations was set up from the personnel in the armed police battalions. Initially, teams were formed from three such battalions; the number has increased to 20. Each team consists of 50 trained, members. “ODRAF was our idea,” recalls Behera. The National Disaster Response Force (NDRF) came later.

“We tried to learn from the best practices of other countries – Australia, Singapore and the US etc. We also shared our experiences with neighbours including Bangladesh, Nepal. They were keen to learn from us,” narrates Behera. In India, Gujarat replicated the Odisha model in the aftermath the 2001 earthquake. Teams from Odisha have also rendered their services during calamities in other states.

“Odisha and OSDMA have proactively leveraged their historical experience and lessons to the benefit of the state and its citizens. As a result of this Odisha stands today as a beacon of hope and efficiency and a model template for effective disaster response,” says NDRF DG SN Pradhan.

Director General of India Meteorological Department (IMD) Dr Mrutyunjay Mohapatra seconds Pradhan. “Odisha has set an example for others in cyclone management based on the early warning provided by IMD,” he says.

However, some are of the opinion that it’s time the OSDMA moved to the next level. “Frankly speaking, we haven’t seen another Super Cyclone-like disaster, so the system hasn’t been tested as to how we can respond in such a situation,” says one expert.

Prusty though believes that OSDMA as an instrument has enormous potential and can emerge as an integrated unit to meet every aspect – preparedness, relief, restoration – in all disasters including pandemics. He suggests, the agency needs to address issues on the total lifecycle of disaster management. It should also have more high-calibre professionals to innovate and introduce modern approaches.

He also advocates for the redesigning of the state relief code with introduction of minimum standards for both preparedness and response in any disaster like situation. “OSDMA should create leadership in using technology in disaster management action plans,” says Prusty.

However, all are optimistic that the much-awaited disaster management training institute should see the light of the day in the near future. “It will surely be a centre of excellence,” hopes Prusty.