Elections in Jharkhand’s 81 assembly constituencies will be held in five phases beginning 30 November, the Election Commission of India announced on Friday. Counting of votes will take place on 23 December. 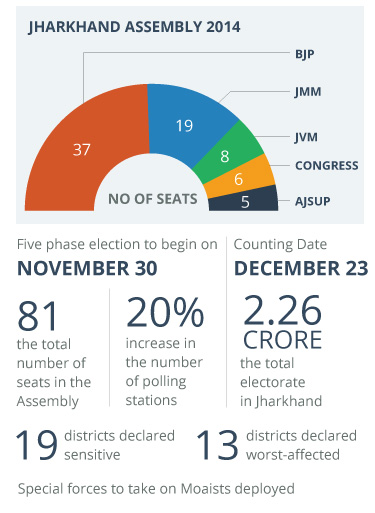 “There were a lot of sensitivities in our mind… We should finish before Christmas (December 25),” Chief Election Commissioner Sunil Arora said at a media briefing. Arora said the model code of conduct for political parties has kicked in for the state with this announcement.

The term of the outgoing assembly expires on 1 January 2020.

The five-phase poll has been necessitated on account of Maoist violence in the state.

Four out of every five assembly constituencies in the state, a total of 67 constituencies, are affected by Maoist violence, Arora said, stressing that special security arrangements have been made for the state’s Maoist-affected districts.