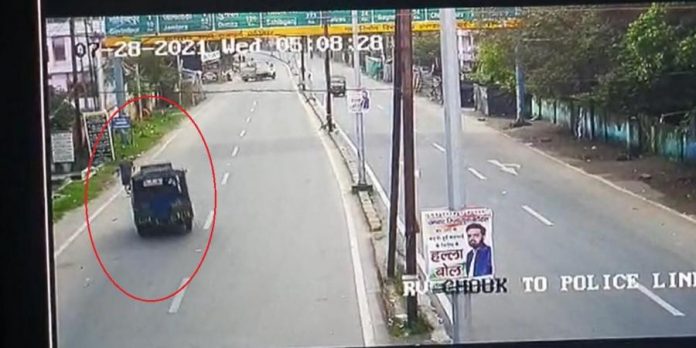 Additional Judge Uttam Anand in Dhanbad was on his morning stroll when he was hit by the autorickshaw. Photo: Screengrab

An apparent hit-and-run case involving the death of a judge in Jharkhand has not only caused shock but has also led to a murder investigation.

Chief Justice of India NV Ramana said he had spoken to the Jharkhand High Court and asserted: “We are aware of the case and we will take care,” NDTV reported.

The driver of an autorickshaw that hit District and Additional Judge Uttam Anand in Dhanbad has been arrested along with an associate, the police said. The Jharkhand High Court has criticized the delay in police action.

The auto was reportedly stolen a few hours before the incident, police sources said.

Judge Uttam Anand was on his morning stroll on July 28 when he was apparently hit by “an unidentified vehicle” near his home in Dhanbad.

Media reports said the police have found that the auto-rickshaw is registered in the name of a woman in Dhanbad who complained that her vehicle was stolen around 1 am. “Various police teams have been roped in to get more details of the accident,” said a police officer.

CCTV footage that has surfaced online shows the judge jogging around 5 am by a deserted road as an auto takes a turn and appears to go straight at him. The vehicle hit the judge and sped off.

Judge Anand was found lying on the road bleeding, by a man who took him to hospital. He died in hospital, according to the police. He remained unidentified, however, for hours.

His family reported him missing when he did not return at 7 am. The police finally tracked him down to the hospital and established him as the man who had died in the accident.

The police say the CCTV footage makes it clear the auto hit him deliberately.

“Two persons, Lakhan Kumar Verma and Rahul Verma, have been arrested and the auto was seized. They have confessed,” NDTV quoted Amol Vinukant Homkar, Inspector General, as saying.

Judge Anand had been handling many cases of mafia killings in Dhanbad town and had recently rejected the bail requests of two gangsters. His family alleges that the police delayed changing the case from “accident” to murder.

Jharkhand Chief Justice Ravi Ranjan expressed dissatisfaction over the alleged delay in filing an FIR and warned of a CBI probe if the police were found wanting.

Earlier, referring to the judge’s death before a bench led by Justice DY Chandrachud, lawyer Vikas Singh had said: “It is a brazen attack on the judiciary. This is a matter which should go to the CBI. The local police are usually complicit in such matters. It is shocking. A judge is on a morning walk and is hit by a vehicle. He was dealing with bail applications of gangsters. This is an attack on judicial independence.”