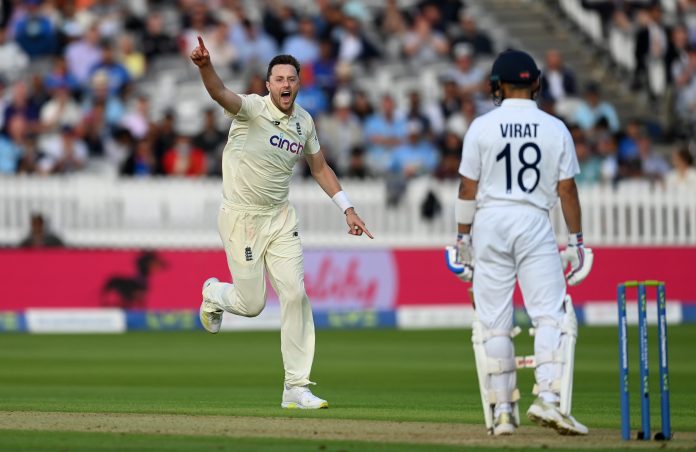 After his maiden five-wicket haul in the first Test at Trent Bridge, Robinson dismissed Kohli for 42 after Kohli edged the ball to Joe Root, who was at the first slip

England pacer Ollie Robinson, who took India skipper Virat Kohli’s wicket, on day one of the second Test match on Thursday, said that it was the biggest wicket of his career so far.

After his maiden five-wicket haul in the first Test at Trent Bridge, Robinson dismissed Kohli for 42 after the Indian skipper edged the ball to Joe Root, at first slip.

“Virat is probably my biggest wicket to date, so I am happy with that. It was a huge moment. The plan for him was always to bowl the fourth-fifth stump line, back of a length. Luckily the plan worked,” said Robinson after stumps on Thursday.

KL Rahul remained unbeaten on 127, carrying his bat from the first ball to last, while his opening partner, Rohit Sharma, got out for 83, his best score in an away Test, to lead India to a commanding 276/3 on day one, after England opted to bowl.

Also read: It is Ashwin’s ‘turn’ that India needs to blunt England in Test II

Robinson credited the opposition batsmen for their efforts but also felt that his team was unlucky.

“There were probably 10-15 play-and-misses that I could count and, on another day, we might have had them two-three down early on,” the 27-year-old rued.

“We definitely looked at conditions and thought we could get a few early ones here. I think on another day it (wickets) might have happened…I felt we did bowl well. We toiled hard against their batters and to be fair, they played well. It’s just one of those days where they did not nick it to be honest,” Robinson said.

Thick clouds in the morning had delayed the start of play as Root was quick to opt for bowling to exploit the conditions, something that did not happen.

Robinson said that England expected the pitch to be a little quicker and nippier, but it is a bit slow, and hence the swing was inconsistent. “The swing was a little bit inconsistent; I don’t know if it was the ball or the overheads. We decided to go wobble-seam for a little bit, which we felt was a good plan, but the wicket was a little bit slow for it and not as receptive as we thought it might be,” he said.

Robinson shared the new ball with ace paceman James Anderson and he said he was up for the challenge after Stuart Broad was ruled out of the Test due to a calf injury.

The first Test between India and England at Trent Bridge ended in a draw after rain washed out the last day of the match. The weather forecast for Day 2 of the second Test looks good. Joe Root is expected to open the bowling on the second day with Robinson and Anderson as the ball is still new.

Budget a silent strike on poor by Modi govt: ...

WPL to be held in Mumbai from March 4-26

Drugs worth Rs 40 lakh seized after raid in M...