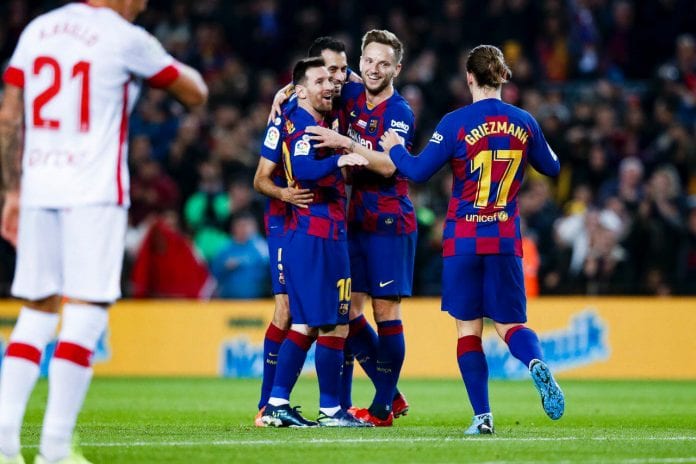 Though Messi’s trio contributed the most to Barcelona’s five-goal win, Luis Suarez stole the limelight with his brilliant backheel that changed a free-flowing move into a goal which involved seven other players.

In the post-match interview, Suarez said, “I knew I had a little gap, my last resort was to try a backheel.”

Barcelona coach Ernesto Valverde too lauded Suarez and expressed that the goal was extraordinary and took him by surprise.

Meanwhile, Messi inched above rival Cristiano Ronaldo after surpassing the Juventus footballer’s 34 hat-trick’s haul. “This is unbelievable. It was a celebration of the Ballon d’Or,” said Valverde.

The stunners from Messi and Suarez overshadowed Antoine Griezmann’s opener assisted by Barcelona goalie Marc-Andre ter Stegen. However, it was an eye-candy match at Camp Nou when Mallorca’s Ante Budimir closed the gap twice to 2-1 and 4-2.

Messi proved why he deserved to get the coveted Ballon d’Or and why he was presented the same before the match. He now has 12 goals on his name this season, one above Real Madrid’s Karim Benzema who clinched a comfortable 2-0 win over Espanyol earlier in the day.

This victory brings the points tally to be equal for Real Madrid and Barcelona, however, the latter takes the top spot due to goal difference. Sevilla stands in third position, behind by four points.

Hindenburg report an ‘attack on India&#...

6:30 AM, 30 January, 2023 0
Over the years, the BBC in India has had its fair share of trouble with the Indian government. Here are some cases over which the British broadcaster and Indian government have locked horns