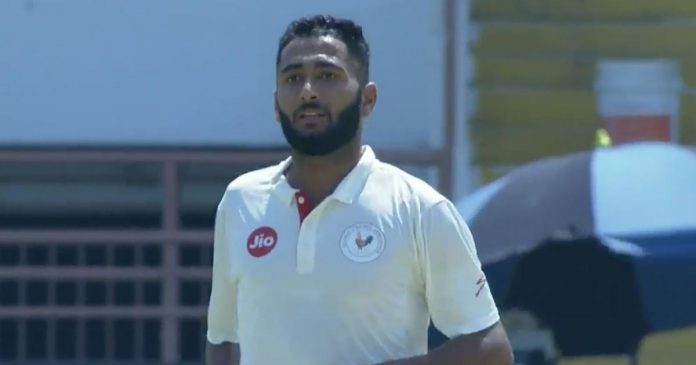 The 23-year-old left-arm pacer from Gujarat, who missed the IPL by a whisker, has been rewarded for his exploits in domestic cricket | Photo: BCCI TV

When the Board of Control for Cricket in India (BCCI) announced the team for the World Test Championship final against New Zealand and the five-Test series against England on Friday (May 8), a tiny piece of history too sneaked in.

After 46 years, a Parsi cricketer, named Arzan Nagwaswalla, is set to don the Team India cap. Just for the record, Farokh Engineer was the last Parsi cricketer to have played for India – the year was 1975, when Nagwaswalla was not even born.

The 23-year-old left-arm pacer from Gujarat, who missed the Indian Premier League by a whisker, has been rewarded for his exploits in domestic cricket. According to experts, Nagwaswalla, who can swing the ball both ways, reminds them of former India pacer Zaheer Khan.

Also read: How sluggish Chepauk pitches have robbed T20 cricket of its charm

According to a report in The Indian Express, Nagwaswalla is the youngest member of the Parsi community in the village of Nergal, in the Maharashtra-Gujarat border town of Umbergaon. In fact, he’s the only one of his generation who’s stayed back while the rest of the community moved to Mumbai. The decision to stay back, according to the report, paid rich dividends as he rose rapidly through the junior ranks in Gujarat.

Nagwaswalla, who joined the Gujarat side in 2018-19, shot to fame with a five-wicket haul against Mumbai at the Wankhede Stadium. But inconsistency remained a problem.

“He performed really well last year in the Syed Mushtaq Ali tournament and in T20 and 50 overs, he has performed very well. I always felt he should get a chance. I always thought he deserves a chance in the IPL. Somehow I don’t know why he didn’t get it, but he deserves an IPL chance,” Nagwaswalla’s former coach and a Gujarat selector, Santosh Desai, told CricBuzz.

Nagwaswalla struck form in the 2019-20 Ranji Trophy season, scalping 41 wickets. In the last Vijay Hazare Trophy, the youngsters plucked 19 wickets, which paved the way for his entry into Team India.

Nagwaswalla is elated. “It is good to be a part of the community. People I know are happy and have kept in touch. It is a great feeling. It has been a really nice journey till now, whatever I have done till now, is a part of the process. So, if you follow the process wisely, results will follow,” Nagwaswalla told Sportstar.