Six-time world champion MC Mary Kom, who fought in the 51kg category, on Saturday (December 28) settled her place for the next year’s Olympic qualifiers in China after defeating Nikhat Zareen in an intense trial bout in New Delhi.

Mary Kom, in a bout which had very few punches, prevailed 9-1 to make the Indian team for the 2020 Tokyo Olympics qualifiers, but the war of words inside the boxing hall turned bitter in a row triggered by Zareen’s public demand for a trial.

On Thursday (October 18), Zareen wrote a letter to Rijiju, demanding that she should be given a trial bout against the six-time champion ahead of the final Indian team selection for 2020 Tokyo Olympics qualifiers.

“All I want is a fair chance. If I’m not given the opporunity to compete what am I training for. Sports is about FairPlay & I don’t want to lose faith in my country. Jai Hind @KirenRijiju @RijijuOffice #AjaySingh @Media_SAI @DGSAI @BFI_official @kishanreddybjp @PMOIndia #TopsAthlete,” Zareen tweeted.

Representatives from Telangana’s boxing association cried foul after the results were declared following the exchange of some harsh words between the boxers during the bout and outside the ring.

“I was a bit angry. There is no doubt. But its all done now. I have moved on. All I say is that talk once you perform not before that. Everyone can see what you do in the ring,” Mary Kom told PTI after the bout.

Mary Kom did not respond to Zareen’s attempt at hugging her after the bout. “They call it clinching in our sport,” was her sharp retort on being asked about it. 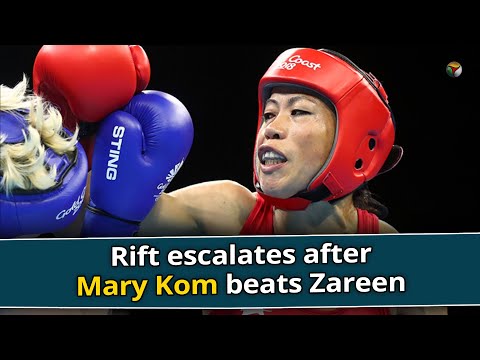 “I am hurt by how she behaved. She used some foul language inside the ring too, but its ok,” said Zareen.

Boxing Federation of India President Ajay Singh had to step in to control the situation after AP Reddy, claiming to represent the Telangana Boxing Association vociferously protested the decision.

“How will boxing grow amid this kind of politics,” Reddy later told reporters after being asked to leave the ringside by Singh and pacified by a disappointed Zareen herself.

The reaction came in lieu of the Boxing Federation of India (BFI) stating that it intends to pick Mary Kom in the 51kg category event in China on the back of her recent bronze medal at the world championships in Russia.

Bitterness dominated the buildup to the bout after it was insinuated that the onus was on Mary Kom to agree for the trial even though it was a call that the federation had to take.

Mary Kom was visibly pumped up at the end of the bout in which she impressed with her composure.

“Why should I shake hands with her? If she wants others to respect her then she should first respect others. I don’t like people with such nature. Just prove your point inside the ring, not outside,” Mary Kom told the reporters.

In the 60kg category, former world champion L Sarita Devi lost to national champion Simranjit Kaur. It was once again a battle of pace as Kaur outwitted Sarita with her precise hitting and quick reflexes.