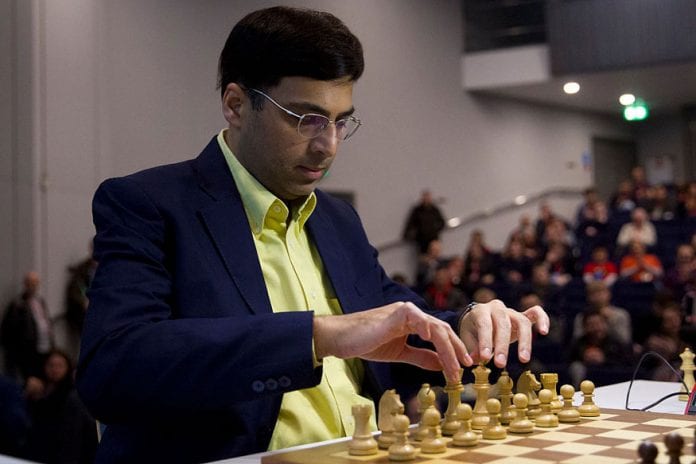 The sports landscape in India of the 90s was about two greats – Sachin Tendulkar and Viswanathan Anand – two stalwarts of their respective sports. While several of the former India batsman’s records now stand threatened by Virat Kohli, it will be difficult for the younger generation to push the chess superstar aside.

Anand, the country’s first Grandmaster, gave chess a new dimension in India, which now has 64 grandmasters – one from each square of the chessboard!

Two decades ago, no one would have envisaged Indian chess booming the way it is. Neither would have anyone imagined a chess player signaling the start of play in India’s most dominant sport – cricket. Anand was recently invited to ring the bell at the iconic Eden Gardens during the historic pink-ball Test match.

India, widely believed to have given the game of chess to the world, is producing quality chess players at such a rate that 10 years down the line, Russia might as well lose their bragging rights of being the world’s chess sovereign. If there is one man who brought about this metamorphosis in Indian chess, it is Anand.

To stress a bit more on the Chennai maestro’s influence in the game, it is important to mention that of the current 64 Grandmasters, 23 are from his home state of Tamil Nadu. Mrs. Aruna Anand, wife and manager of the icon, once hilariously revealed in an interview that her husband’s stardom has led Indians to nickname her ‘Mrs. Chess.’

While being an active player himself, the five-time grandmaster also organises training camps for budding chess players.

Anand has remained at peak of his game for more than 30 years now. The longevity of his remarkable career can be highlighted from the fact that he has played against two megastars from two different eras – Norwegian grandmaster Magnus Carlsen and his older Russian counterpart Garry Kasparov.

As India’s ‘Lightning Kid’ celebrates the golden jubilee of his birth today, here’s recalling some of the greatest feats from his career that made him the sharpest mind in the country and one of the sharpest in the world.

The mind is your most powerful weapon, and no one better than Vishy has been able to prove that. On his 50th birthday today, the timeless Anand is all set to release his autobiography titled ‘Mind Masters: Winning Lessons From A Champion’s Life.’ An autobiography while he is still among the top 10 players – that is what a legend is all about.

Here’s wishing the King of the chessboard a very happy birthday.

Game’s up for Zerodha’s Kamath after ‘beating’ Anand in ...