India was successful in holding the reigning Asian Champions Qatar to a goalless draw to gain a much-anticipated point from their away match of the FIFA World Cup qualifiers in Doha on Tuesday (September 10).

A gritty India, despite playing without their captain Sunil Chhetri who was on rest due to fever, the youngsters from the team tied Qatar from scoring any goal. The team that won the Asian Cup title in January saw an empty scoreboard despite the home side having more than one dozen shots on target.

Captain for the day and Indian goalkeeper Gurpreet Singh Sandhu single-handedly stole the show for the visiting side as he stopped the Qataris from scoring any goal in the Group E match which will be remembered for long by the Indians. It was, no doubt, one of the best results by India in recent times.

“I feel extremely proud of the team for our performance against Qatar,” said Gurpreet.

“The team-effort helped us achieve the result. It will help us immensely in the qualifiers. We have played just two matches, and we have played well, that too against two powerful teams. It gives us that added motivation and confidence that in football, anything is possible,” he added.

India, who had suffered a 1-2 loss to Oman in their opening match on September 5 in Guwahati, now have one point from two matches while Qatar have four points as they had beaten Afghanistan 6-0 in their first match in Doha.

Custodian Gurpreet, who was unbeatable under the Indian bar, believes anything is possible in football and credited the entire team for stealing an unexpected point from the away match.

“Everyone played their hearts out, and gave everything out on the pitch. That enabled us to come back to the dressing room, satisfied, and with a very crucial point,” he said.

The two sides had played just one official senior match before Tuesday (September 10) and Qatar had won 6-0 in September 2007 in the 2010 World Cup qualifiers. India next play Bangladesh on October 15 in Kolkata.

It was a completely one-sided match with Qatar doing all the attack and the Indians defending in their half for the most part of the match.

Qatar, ranked 62nd in the world, had more than two dozen shots on Indian goal out of which at least a dozen were on target. India, 103 in the latest FIFA rankings, on the other hand, had just two shots on the opposition goal in the entire match.

To the credit of the Indians, they defended brilliantly, maintained their shape throughout and did not give space to the speedy Qatari attackers.

In the first half, India expectedly sat deep and defended their citadel. The home side had at least half a dozen on-target shots and seven corners in the first half while India did not have any.

Sandhu was a busy man as he was called into action several times but he remained unbeaten. 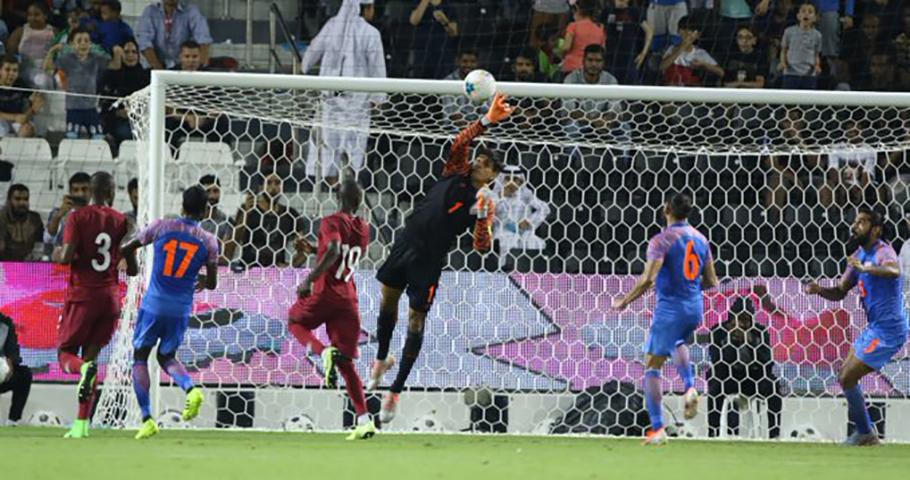 Qatar captain Hassan Al-Haydos had two shots early into the match but Sandhu was upto the task, including the brilliant finger-tip save in the 20th minute.

A miss pass from Mandar Rao Desai in the 14th minute just outside the penalty box fell for Abdul Aziz Hatem, but his curling strike flew just above the crossbar.

A free header off Boualem Khoukhi in the 26th minute was also off the target as India escaped unscathed in the first half.

The second half saw India opening up a bit and they were seeing more of the opposition goal than the first half but still could not get a clear goal-bound shot.

Sahal Samad was brilliant in the midfield as he, on a few occasions, got the better of his opponents and sent fine passes to the likes of Udanta Singh.

India got their first corner in the 66th minute. Anirudha Thapa delivered a long corner and Sahal took a left-footed half volley from just outside the box which flew inches away from the right post.

Dear India, THAT is my team and THOSE are my boys! Cannot describe how proud I am at this moment. Not a big result for the table, but in terms of a fight, as big as it can get. Huge credit to the coaching staff and the dressing room. #QATIND

Igor Stimac made four changes to his side from the eleven that started in their 1-2 defeat against Oman. Chhetri was left out as he was suffering from fever. Ashique Kuruniyan has a slight niggle and therefore Nikhil Poojary took his place. Brandon Fernandes and Subhasish Bose were replaced by Sahal Samad and Mandar Rao Desai.

The former Croatian international, now Indian football team’s coach Igor Stimac is “more than happy” with the solitary point but wants the Indian players to stay focussed and garner more points in their upcoming matches.

He also told the players to stay grounded as they can’t afford complacency during the upcoming matches.

“As a coach, I don’t have time to waste in thinking too much higher than it was a few days ago when we lost to Oman. Still today as a coach, of course, I am more than happy to get a point against the reigning champions of Asia,” Stimac said at the post-match press conference.

“We need to improve in certain areas, on the other hand, all congratulations not just to my players but also for Qatar. There was excitement in front of both goals, of course.” “It was a great experience for us. All credits to my players, I am very proud of my players. But the message to the team is to keep yourself down as it is just a point,” he added.

“Qatar deserved more from this game. They created more chances today but we also had many chances,” Stimac said.

Stimac also took a potshot at those who criticised his team’s fitness levels after India lost 1-2 to Oman in their campaign-opener, with both Oman goals coming in the final eight minutes. The coach asserted that fitness was never a problem for his side.

MASSIVE SHOUTOUT? to all the fans at the stadium? and to the ones that supported us from back at home??‍♂️??
?#BackTheBlue?#QATIND ⚔ #WCQ ?? #BlueTigers ? #IndianFootball ⚽ pic.twitter.com/fhOT622KNG

“You see, I cannot reply to each comment after a game because not many people are well educated about football. We are a fit team and we proved it today. We played against Qatar and we made space for ourselves even in the last minutes. We made sprints even in the 95th minute, showing a lot of concentration. So we showed good fitness,” Stimac said.

Qatar head coach Felix Sanchez, on the other hand, made two changes to the line-up that started against Afghanistan whom they had beaten 6-0. Akram Afif and Karim Boudiaf were forced out due to injuries and they were replaced by Bassam Hisham and Abdul Aziz Hatem.

“Our country has a population of over 1.3 billion people compared to that this was a very small crowd. “I want to see 80,000 people in Kolkata against Bangladesh. We deserve that and they need to come and support us,” Stimac signed off.

Gurpreet also thanked the Indian fans, who had turned up in large numbers. “It was like playing at home away from home. The support was incredible. They spurred us on, cheering us all throughout,” he said.

?”We had incredible support away from home and that helped us throughout the game”??‍♂️?

Here’s what @GurpreetGK had to say after tonight’s historic performance????