India won the second Test against South Africa by an innings and 137 runs to clinch the three-match series with a game left to play, in Pune on Sunday (October 13).

The dominating host socred a massive 601 for five in their first innings with captain Virat Kohli leading the squad with a double century.

The comprehensive victory, coming on the fourth day, has consolidated India’s top position in the World Test Championship table.

India now have 200 points in their kitty, a handsome 140 points away from nearest-rival New Zealand.

Competing in his 50th Test as captain, Virat Kohli has now led India to their 11th consecutive series at home, a world record. The skipper on day 2 of the second Test broke several records including Australian legend Don Bradman’s most scores of 150 and above as the skipper.

With his 7th double ton shattered the record for most Test double hundreds by an Indian, overtaking Virendra Sehwag and Sachin Tendulkar. Kohli has also reached 7,000 runs in Test cricket. 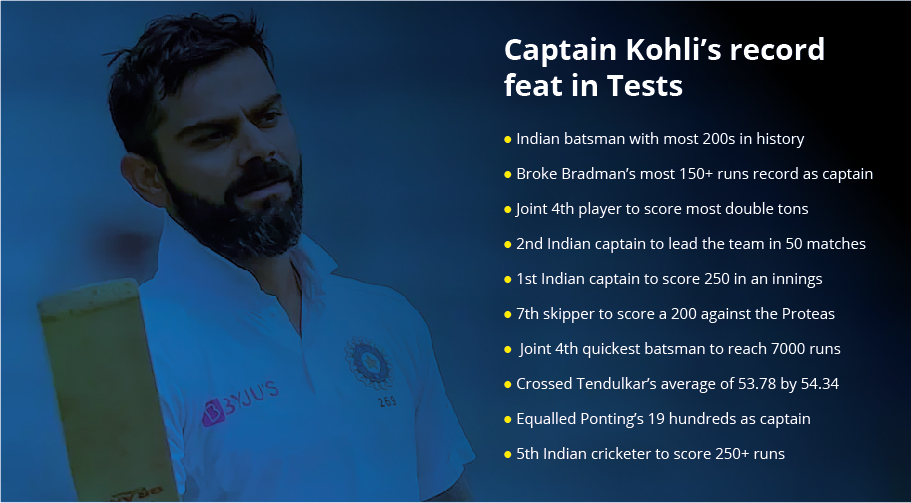 As for today, Opener Dean Elgar (48) was the top-scorer for the visitors while pacer Umesh Yadav and left-arm spinner Ravindra Jadeja took three wickets apiece for India.

India won the first Test match by 203 runs in Bengaluru and the third and final Test is scheduled from October 19 in Ranchi.

South Africa will return to India next year to compete in a three-match ODI series, beginning in Dharamsala on March 20.