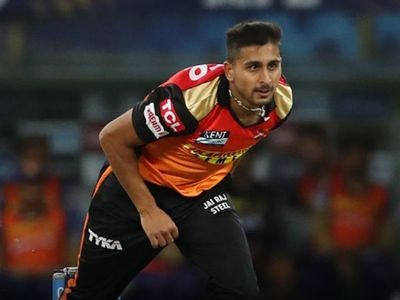 When was the last time an Indian pacer fired at 150+ kph in the international circuit? Watching tearaway sheer pace bowlers has been an absolute beauty on a cricket pitch and that is why Umran Malik from Jammu and Kashmir is turning heads at the ongoing IPL.

Last week, Malik, playing for SunRisers Hyderabad, clocked 153 kph to bowl the fastest delivery of IPL 2021 against Royal Challengers. Even Team India captain Virat Kohli has taken note of his exploits and Malik, the son of a fruit-seller, has been suitably rewarded.

As per multiple reports, Malik, just 21, has been asked to stay back as a net bowler for the Indian Team at the T20 World Cup. Believe it or not, Malik has played just two games for his state and this ‘sudden promotion’ is seen as a giant leap in the young bowler’s career.

“Yes, he will be staying back with the team as a net bowler. He was impressive in the IPL and we feel it will be a good idea to have the batsmen face him at the nets. It will also be good exposure for him to bowl to the quality batsmen like Kohli and Rohit,” ANI reported, quoting a BCCI insider.

The fortunes of Malik, a rookie who has had no exposure in militancy-hit Kashmir, changed when former India all-rounder Irfan Pathan took charge as the mentor of the state team.

It did not take long for Irfan to see the fire in Malik’s belly.

“Being a top fast bowler, Irfan saw huge potential in Umran and they started mentoring the young cricketers and that boosted his confidence,” Randhir Singh Manhas, who coached Malik in his early days, told Sportstar in an interview.

Pathan says he was blown away by the sheer pace Malik generated at a camp in Jammu.

“What struck me was his pace, but back then, he would jump out a lot. So, we had to work a bit on his bowling action. That helped him gain control and it benefitted his bowling,” Pathan said.

However, with cricketing action getting suspended in the wake of curfew following the abrogation of Article 370 in Jammu and Kashmir, Malik’s possible surge came to a halt.

Hailing from a poor family, playing cricket was a luxury of sorts for Malik, but his father, who runs a fruit shop in Gujjar Nagar, pushed his son to go that extra mile.

As per a report in Sportstar, Malik is a Class X drop-out and “all he wanted in life was to just play cricket”.

“From the very starting, I used to bowl fast. When I played cricket with Cosco ball, I used to bowl fast then also. We used to play one over matches and I used to run in and bowl fast yorkers. In 2018, U-19 trials came and I was bowling, the selectors saw me. I was bowling with jogger shoes, then my friend gave me spike shoes and I then came into the U-19 team. Then I played Under-23 cricket,” Malik told teammate Bhuvneshwar Kumar in a video posted on iplt20.com.

Then, as destiny would have it, he was picked as a net bowler for SunRisers Hyderabad. Malik said he was scared to bowl to the likes of David Warner and Kane Williamson at the nets, but the pace he generated in fact rattled Warner and Williamson, prompting the team to throw the youngster right into the circuit.

With T Natarajan, another fairy-tale story from Tamil Nadu, being ruled out due to COVID, Malik was picked in a game, and he clocked 150+kph multiple times. Soon, Twitter and Facebook exploded with comments, marking his arrival on the international stage.

Kohli, who has inculcated a fast-bowling culture in Indian cricket, is enthused.

“This tournament throws up talent every year, good to see a guy bowling at 150 clicks. It is important to understand the progress of individuals from here on. The pool of fast bowlers being strong is always a good sign for Indian cricket and whenever you see talent like this, you are going to have your eyes on them and make sure you maximise their potential which is already being seen at the IPL level,” said Kohli.