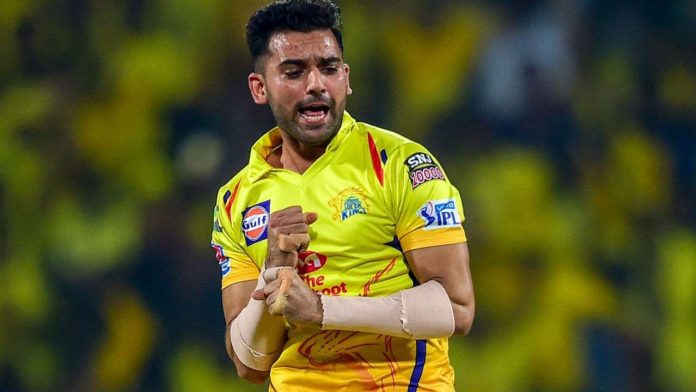 Pacer Deepak Chahar who had a dream run in the auction where Chennai Super Kings management bid ₹14 crore to buy him at the IPL 2022 auction is over the moon with the unbelievable offer.

He says he “actually wanted” CSK management to stop bidding for him after the price had touched ₹13 crore, which made him the most expensive Indian bowler at an IPL auction. And he had a good reason too for that.

“At one point, I thought it (the bid price) was too much. As a CSK player, I also want to build a good team. So after they spent 13 crore, I actually wanted the bidding to stop so I can go to CSK quickly and then we can buy some other players (with the money saved),” he added.

Chahar, who has made it to the Indian national team after a long time, however, said he couldn’t imagine playing for any other team than CSK.

“I wanted to play for CSK because I haven’t imagined myself playing in any other colour than yellow,” Chahar told Star Sports.

CSK as a team has been keeping its flock together and over the years and during several auctions, they have bought back their key players if they were not retained. Ambati Rayudu, Dwayne Bravo, Robin Uthappa and Mitchell Santner are a few players they have bought back.

However, his retention at a bid price of ₹14 crore shocked the entire cricket fraternity and fanhood and evoked extreme reactions across the board. In fact, Chahar’s price is higher than captain MS Dhoni’s ₹12 crore at which he has been retained.

Chahar recalled that in 2018, the franchise owner N Srinivasan had told him that “you will play in yellow always”. Since then, Chahar said, he had never brought up the topic of retention with the team management.

“In 2018, I had met Srinivasan sir, and he has said, you will play in yellow always. So I took his word that day and since then I have never spoken about retention. I knew CSK would bid (for me).”

According to cricket experts, it seems that Chennai is looking towards the future with the selection of the team that they have built which includes a mix of experienced and fresh players.

This will be the fifth season that Chahar will be representing the CSK having done so since 2018 when he was picked up for ₹80 lakh by the team.

The Indian team, which is playing West Indies in a bilateral series currently and of which Chahar is a part now, was watching from their hotel room the proceedings of the IPL auction.

“We (India’s T20I squad) were travelling from Ahmedabad to Kolkata, and the whole team was watching the auction. Everyone was saying kitna ho gaya (what’s the bid price?) and all that.”

Chahar’s however feels bad that he could never play alongside his cousin Rahul Chahar, despite once sharing the dressing room at Rising Pune Supergiant.

“In Pune, I played the first game, he played second, I played third, and he played fourth, but we never played together. I was thinking this auction we might play together, but maybe some other time. I’ll ask Rahul to come from Punjab for next year,” he said laughing.

Pakistani drone shot down by BSF along Punjab...