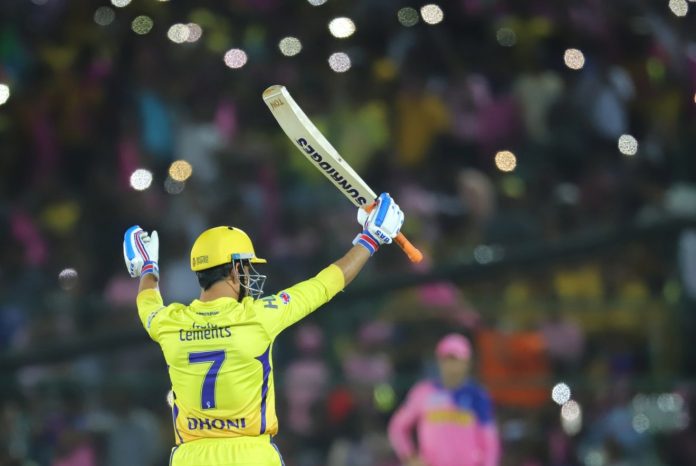 ‘Dhoni finishes off in style, a magnificent strike into the crowd. India lift the world cup after 28 years.’ Ravi Shastri’s exuberant voice showed more emotions than Mahendra Singh Dhoni, the then captain of the Indian cricket team who led the team to their second only World Cup win, on home ground.

Known for his ‘calmness’ on the field, it was uncharacteristic of Dhoni, who barged into the field during an IPL game on Thursday (April 11). The ‘Captain Cool,’ MS Dhoni walked into the field in a Chennai versus Rajasthan game, when the umpire cancelled a no-ball that was awarded in the twentieth over.

Ben Stokes’ fourth ball of the twentieth over was a full toss to Mitchell Santner. CSK needed eight runs off three balls at that point. Umpire Ulhas Gandhe signalled for a no-ball after Stokes bowled the fourth ball, but went to consult leg-umpire Bruce Oxenford to take a final call, and that was when the drama unfolded.

The stadium screen had displayed a free-hit following Gandhe’s signal. Umpire Oxenford deemed it a legal delivery as the ball was not above waist height thereby forcing Gandhe to revoke his call. Santner jumped high in the air to face a ball that pitched higher than usual.

Ravindra Jadeja, batsman on the other end continued to have a chat with the umpires while Dhoni barged into the field. A few Rajasthan players also were involved in the argument and finally, Oxenford’s call stood.

What followed next was unprecedented and rather unacceptable, cry cricket fans. An agitated Dhoni walked into the field and started arguing with the umpires. After a minute’s heated discussion, the decision was not overturned and Dhoni had to walk out. He seemed disappointed and angry. Bowler Ben Stokes tried to calm down Dhoni but in vain. Interestingly, Oxenford was the third umpire in the India-Australia series of 2007 that was infamous for the ‘monkey gate’ scandal involving Harbhajan Singh and Andrew Simmons.

Dhoni got out in the last over, unable to finish off the game, like he usually does. However, Chennai Super Kings (CSK) emerged victorious on the night of April 11 with Santner hitting a six of the last ball, fetching Dhoni his 100th win as captain in IPL.

Dhoni has been fined 50% of his match fee for his misadventure on Thursday. It is roughly ₹50 lakhs, considering his contract says ₹15 crore for one season of IPL.

For all the die-hard Dhoni fans this avatar of him came in as a big surprise. For a man who has shown very little emotions or has largely only smiled even during losses, this riled up image was new. One could sense the anger and frustration in his body language.

Ever since his debut, ‘Mahi,’ as he is fondly called, is known as ‘flamboyant finisher.’ Dhoni who used to come in for the sixth or seventh wicket during his initial cricketing days was seen as a threat to the opponents. Be it his 183* against Sri Lanka in a 2005 or 72* against Pakistan in 2006, he was known for being destructive and bowler’s nightmare in the death overs with his ability to turn the game around completely. But Mahi showed no signs of aggression except in his batting. His signature smile was all that he had, irrespective of a win or a loss.

As a captain, Dhoni is known for not hogging the limelight during victories and getting ahead in the line to face questions during a defeat. He is often pictured in a corner while posing for pictures with teammates and trophies.

The Jharkhand cricketer was nicknamed ‘Captain Cool,’ for his calm demeanour during crucial match junctures and losses. Be it a nail-biting last over fielding or a losing a match narrowly, Dhoni is known to brush it aside with just a smile.

It was uncool to walk into the field: experts

Captain Dhoni drew flak from the cricketing community and certain fans for this field walk-in. Former England cricketer Michael Vaughn tweeted, ‘As a Captain, you have to respect the Umpire’s decision. It was a terrible example to set.’ ‘This is not a good look for the game. No place at all for a Captain to storm onto the pitch from the Dugout.’ Speaking at a cricket show, he said it is unacceptable for a captain to do it, even though it is MS Dhoni.

While most experts agreed that a no-ball was unfairly let go, it was still unacceptable for the captain to storm into the field. Commentator Harsha Bhogle retorted it is something he (Dhoni) will realise he shouldn’t have done. Speaking at the post-match show, Simon Doull, Commentator echoed similar thoughts that he had not seen a captain do this ever before.

Former Australian opener Michael Slater, who was a commentator for the CSK versus RR match said he was shocked to see a captain walk into the field. Echoing Slater, former India wicketkeeper Deep Dasgupta said ‘He’s got every right to go and speak to the fourth umpire, he’s got every right to speak to the match referee, but walking in while the game is on (is wrong). Just because you feel you’ve been wronged, you can’t go and do things which are not permitted.”

Captain not so ‘cool’

This is not the first time that the skipper has shown aggression on the field. During a 2010 match against Kings XI Punjab, playing at Dharamshala, Dhoni piled up crucial 30-runs in the last two overs, pushing CSK into the semi-finals of that year’s IPL. He was pumped-up and punched his helmet, which, I believe is the most aggressive that I’ve seen him in 12-years of IPL.

During a 2017 match against Bangladesh, bowler Mustafizur Rahman appeared to deliberately block the batsmen’s path while running between the wickets. After observing once, Dhoni ‘shoved’ Rahman when he attempted to block his way while running between the wickets. Fans were thrilled to witness this avatar of Dhoni, who responded to a provocation. Even after pushing him he can be seen smiling at the bowler, a classic Dhoni, fans say.

CSK has won the Indian Premier League’s (IPL) ‘Fairplay award,’ a record six times in the 12 editions. CSK are currently ranked seventh in the IPL fair play points and Thursday’s incident has cost the team dearly.

The fangirl in me felt let down at my captain’s idea of walking into the field, even though the umpires deprived the batsman of a free hit. Growing up idolising the likes of Rahul Dravid and Sachin Tendulkar, my hero had definitely crossed the line, this time. Will this deter my support for jersey number seven? Definitely not.

He is the only captain to have won all three ICC trophies — ODI World Cup, World Twenty20 and Champions Trophy. He led the team to number one ranking in test, ODI and T20. He has had his fair share of defeats. While being upset over his uncharacteristic behaviour, I will continue to support ‘Thala,’ along with numerous other die-hard fans, hoping that he does not make any further regrettable actions.

Didn’t play to our potential this season: Dhoni after CSK̵...