The year 2021’s first and only solar eclipse, called ring of fire eclipse, will happen on Thursday (June 10). A few days back the world witnessed super blood moon and total lunar eclipse.

Majority of India, however, will miss the solar eclipse as it will be visible only from Ladakh and Arunachal Pradesh between 01:42 pm (IST) and 06:41 PM (IST). Sky-gazers, however, can watch it live online using the following link: 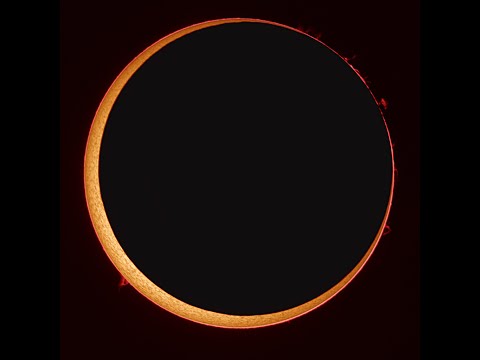 The ring of fire eclipse happens only when the moon covers parts of the sun, thus creating a cosmic halo around its edges. An annular solar eclipse happens when the Moon is farthest from the Earth and because of the long distance between the two bodies the Moon seems smaller. It does not block the entire view of the Sun forming a dark disk on top of a larger Sun, The India Today reported.

In Arunachal Pradesh, people will be able to see a very small part of the eclipse from the vicinity of Dibang Wildlife Sanctuary around 5.52 pm.

“On the northern borders, in Ladakh, a sliver of land in the border region can experience the last phase of the partial eclipse, again for a short duration, but relatively at a higher altitude than the eastern part of the country,” director of MP Birla Planetarium, Debiprasad Duari told PTI.

North America and parts of Europe and Asia will get a better view of the cosmic event. In Canada, it will be seen for about three minutes. Greenland will be able to see the eclipse reach its peak after which it will be seen in Siberia.

Also read: World’s food and nutrition security can be met by eating insects

A total solar eclipse happens when the Moon passes between Earth and the Sun and blocks the light of the Sun. But, when the Moon is too far away from earth, it looks smaller and does not block the entire view of the Sun.

According to NASA, annular solar eclipses happen somewhere or the other on Earth every 18 months and are visible only for a few minutes. In contrast, lunar eclipses can be seen for longer duration of time.