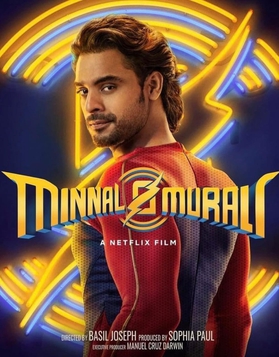 Minnal Murali is about two men in a village who have acquired superpowers from a lightning strike. One is good, the other is bad. The good one is Tovino Thomas as Jaison, and the bad one is Guru Somasundaram as Shibu.

In the end, Jaison slays Shibu, and good overcomes evil. Yet, the movie invents itself well. In fact, it is a directorial dare of sorts. Who would have thought of ruralising a superhero; or drastically bringing down the stakes:  to be saved is not the planet, or the universe; it is a small village.

The director, Basil Joseph, takes his time in establishing his characters. The first act, the exposition, itself takes close to 40 minutes. The lightning strikes — the first plot point turns— far into the screen time. And, even for a fable, the story has holes. For instance, Jaison in his mask is easily recognisable; yet his own family members— including his brother-in-law, a hostile police officer, or even the whole village fail to detect his identity. Still, the movie works.

Minnal Murali primarily derives its energy from its rather charged treatment of Shibu, with Somasundaram doing a classic act of helpless villainy; so helpless that it comes across as just. Indeed, when Shibu commits arson and murder, we are not particularly judgmental about it.

In the movie, the tragedy of Shibu’s love, unrequited for 28 years, is much more serious a trauma than the failed love affair of the rather goofy hero. As a result, the apocalypse that Shibu visits on his village comes across as, well, fair. The subaltern villain has been much wronged against. And the very human urge to turn into a beast rendered is understandable to the viewers even if not condoned.

Also read: Exclusive! Minnal Murali takes off in style, ready to fly to the next level

The recent crop of Malayalam movies shows a great deal of imagination and enterprise. Many of the Fahadh Faasil movies (Joji, for example) and those by newcomers are refreshing in their approach and angle toward a story. And they take care to have strong if typical, emotionally loaded scenes.

Even in a relatively big-budget, commercial movie like Kaaval, starring Suresh Gopi and directed by Nithin Renji Panicker, the characters are treated in a way that the audience stays emotionally invested. So, later on in the movie, even when the director resorts to unlikely resolutions for the main crisis of the story, that of the hero in quest for the justice denied to him, with a rather inexplicable priest who suddenly turns out to be the chief villain.

In fact, the movie’s villains keep shifting. Sometimes it is a private financier and then it is the local police officers, and then the priest. That there is the absence of a strong central villain, or the fact that the hero has no serious court case against him despite the fact that he takes the law frequently into his hands, may appear too convenient, but no one seems to care. The emotion has been laid thick, like a carpet, over all the cracks in the structure, and we don’t mind.

There are other Malayalam movies in recent years that have done well even while beating a new path. Aarkkariyam, Gynan Prakashan, Kala (Weed), and Kumbalangi Nights. The list is quite long. The essence of it is that the changes in Malayalam cinema sensibility is acquiring critical mass. And the new set of actors, like Tovino Thomas and Faasil, are ready to play different roles. They are fluid and would rather not be typecast, moving away from the aspirational superstar image — a rather delimiting deal, as it imposes restrictions on the choice of roles— of a Mammooty or Mohanlal.

If there is one thing lacking in the post-modern Malayalam cinema, it is that the frames lack compositional beauty: there is no poetry, the kind of sensuous yet dramatic portrayal of the phenomena of the world, that a Bergman or a Tarkovsky would impart to each of their shots. But in all, the Malayalam film mind is well and teeming. Certainly, it looks like a dazzling 2022 under the arc lights.

(CP Surendran’s novel, One Love And The Many Lives of Osip B, is available on Amazon, and in all leading book stores across India)

No Delhi mayor polls again as big change in v...