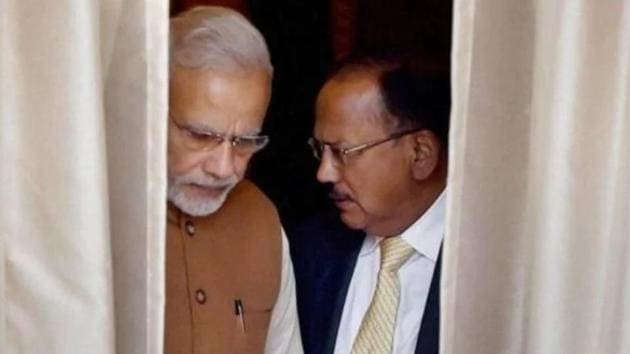 Clearly, for both the prime minister and his NSA, any individual, organisation or institution flagging issues in conflict with a policy or measure of the government, are branded seditious.. Pic: PTI

National Security Advisor (NSA) Ajit Doval’s recent broadside against civil society and his contention that its members are naive enough to be “subverted, suborned, divided, manipulated to hurt the interests of a nation”, marks the first time that an important non-politician person in India’s security establishment has lent support to the sangh parivar’s political onslaught on civil society organisations and individuals associated with these institutions.

This underscores the assessment of the Modi regime that civil society, more than opposition parties, is more consistent in playing the role of the watchdog, a responsibility that has assumed greater importance due to the regime’s autocratic character becoming increasingly manifest. This is especially true since 2019, as both the anti-CAA movement and the ongoing farmers’ stir, which is to complete one year of sit-in very shortly, have been led by members of the civil society.

The NSA’s claims seeking to warn budding police officers of the existence of a fifth column within civil society without providing specific details, paints the entire sector as being insidious. After having flagged a wide section of society ranging from liberal and left-of-centre groups besides other sections of the intelligentsia, including media, and creating prejudicial labels, like Urban Naxals, Doval’s statement seeks to negatively depict an important and sizeable section of society’s conscience keepers.

These claims come close on the heels of the Prime Minister Narendra Modi’s malicious remarks targeting human rights campaigners and organisations. In his address at the founding day function of the National Human Rights Commission last month, Modi attacked the so-called “selective” approach of human rights groups and charged them of viewing issues through a “political lens.” These groups, an integral part of civil society, were also accused by Modi of denting India’s image “as well as democracy”.

Clearly, for both the prime minister and his NSA, any individual, organisation or institution flagging issues in conflict with a policy or measure of the government, are branded seditious.

Significantly, these attacks on the civil society come close on the heels of decision of the Congress party to forge common cause with NGOs and civil society activists, with the aim of politically contesting the Modi government. A committee was established recently with the objective of coordinating agitations and this is to liaise with civil society organisations, activists and intellectuals in an effort to channelise shared anger against the Modi government on policy and political issues.

Ironically, in July, during the visit of American Secretary of State Antony Blinken to India, the United States nudged the Modi government to relent on its campaign against the media, courts and civil society, while sharing its perception that India was regressing on human rights and freedom of religion and expression.

Doval’s observations during his address to trainee police officers, future handlers of India’s security, however smacks of double-standards because his public profile post-retirement from India’s intelligence apparatus in 2005 was built on the basis of his initiatives, engagements and interventions in the civil society activities.

Besides being a founding director of the Vivekananda Foundation, Doval was also active on numerous fora associated with security think-tanks in India and abroad, regularly writing articles and delivering keynote addresses besides participating in seminars.

It was through these civil society interventions that he provided articulation to alternatives to the then UPA regime’s security and intelligence policies and actions and this certainly played an important role in Prime Minister Narendra Modi’s decision to appoint him as NSA.

Not just Doval, but even today the sangh parivar through its scores of affiliated bodies is active in civil society activities, the difference being that while the organisations and individuals who are part of the saffron fraternity, were pre-2014 critical of the political regime of that time, in the Modi era, they have become almost a part of the socio-political and economic establishments.

It is also worth recalling that the movement which pushed the Manmohan Singh government down the precipice was the Indian Against Corruption stir in 2011. In this movement, it has been established, a key role was played by the Rashtriya Swayamsevak Sangh and several of its affiliates. Paradoxically, NDA led by Modi owed much of its electoral dividend to this agitation.

The movement witnessed participation of not just the urban middle-class masses and students, but also doyens of civil society, many active in the human rights movements and other sectors in which this government considers any form of criticism as nothing but absolutely traitorous. The same sort of partnership had been witnessed in the run up to imposition of Emergency by Indira Gandhi and during the dark period that followed.

The criticism of these same sections, partners once, by Modi and Doval now, demonstrates their duplicitousness – they had eagerly joined forces with these groups till when it suited their political purpose and thereafter have begun demonising them.

After having been the one who played an important part in negotiating with the UPA regime on behalf of people, on the issue of corruption and demand for a Lok Pal, the Modi government now does not wish any of these groups to perform the same function.

This is because of the establishment’s awareness that bereft of civil society institutions to give voice to their sentiments and provide a framework for their mobilisation; people’s opinions remain muted or unarticulated.

Typically, populist regimes are opposed to those political or social structures which seek to perform this mediating role, choosing to eliminate what is wrongly depicted as intermediaries; for instance how Modi has established one-way communication channels by using social media and captive media, riding roughshod or defaming mainstream media organisations and journalists.

The populist phenomenon that India now witnesses is certainly resulting in a threat to liberal democracy, its institutions and civil society. It is not that sections of the civil society in India never supported or legitimised the state’s interests. But while previous regimes more often than patronised those supportive sections, they rarely launched a political tirade against the critical elements.

Indira Gandhi was the first prime minister to campaign and take action against the sector, introducing the ‘foreign hand’ in India’s political vocabulary and introducing the now repressive state tool, Foreign Contribution Regulation Act, which controls and monitors financial flows of political opponents.

This law was given more teeth by this government in 2020 and now it officially draws a line between “genuine NGOs” and not so “legitimate” in a throwback to the BJP’s advocacy of “genuine secularism” as opposed to “pseudo-secularism.”

The last seven years has seen the government take punitive action against several organisations and institutions of the civil society.

Although even Manmohan Singh claimed the role of alleged foreign hands behind several campaigns by activists and rights groups, the attack on civil society is now much incessant and organised now, as evident with the NSA too joining what is essentially a political campaign.

The worry is that this political brief is being indoctrinated into the minds of aspiring public servants and handlers of India’s internal and external security and intelligence apparatus.

(The writer is a NCR-based author and journalist. His books include The RSS: Icons of the
Indian Right and Narendra Modi: The Man, The Times. He tweets at @NilanjanUdwin)