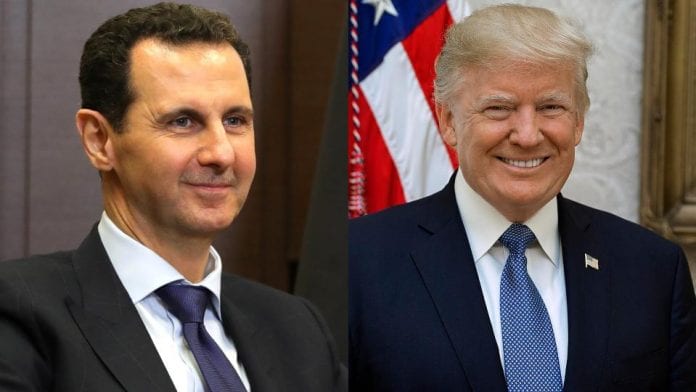 In a move reminiscent of Vietnam, United States President Donald Trump has ordered the withdrawal of troops from embattled Syria, defeated in his attempt to oust president Bashar al-Assad. The US exit has left Syria in a deeper mess than when it needlessly intervened in that country.

The worst affected by the US withdrawal are the Kurds in Syria, who backed the US in fighting the radical Islamic state group. They have been left to the mercy of neighbouring Turkey which has launched an armed attack on Syria to decimate the Kurds with whom the government in Ankara harbours a long history of animosity.

Washington’s decision to withdraw troops has evoked wide condemnation across the political spectrum in the US with some among Republicans and Democrats calling it the “worst decision of the Trump presidency”.

A Republican senator Marco Rubio said he didn’t know what could be done to undo the harm he felt was resulting from the withdrawal. “There are some mistakes that are not easy to reverse. And there are some that are irreversible,” Rubio said, quoted by agencies.

For the US, the decision to withdraw troops indicates that the superpower has gone a full circle. From invading Afghanistan following the 9/11 attacks in 2001, which much of the world backed, to a brazen unilateral invasion of Iraq in 2003 the US now says it is least bothered what is happening in that part of the world. Trump blithely said, “It’s time for us to come home”, while dismissing any stakes in Syria.

It was not as if the Syrians invited the US to intervene when a popular uprising in 2011 threatened the Bashar al-Assad government in Damascus. The popular uprising, part of the wider unrest across the Middle-East (or, West Asia) called the Arab Spring, was a genuine outpouring of public frustration at the dictatorial al-Assad regime that had ruled Syria since 1970 (first Hafez al-Assad followed by his son Bashar).

An alarmed government in Damascus came down heavily on the protests, using armed forces and killing scores of unarmed people further infuriating citizens, and helping spread the anger across the country. It was at this time that the western powers led by the US, including the United Kingdom and France decided to use the opportunity and oust the al-Assad regime as it was for long perceived to be anti-West and anti-Israel.

The US-led powers used the United Nations Security Council, imposed sanctions on Syria while simultaneously arming sections of the protesters, training them and funding them to fight the government. In doing so, the West willy-nilly turned what could have been a citizen-centric peaceful protest into one that shifted into a violent insurgency.

On the one hand, the Syrians on the street were short-changed as their protests were co-opted by the US-led nations. On the other, the Islamic State which was a fledgling organisation at the time turned out to be a beneficiary by default. Members and supporters of the group, in the initial stage, mingled with armed rebels receiving training, weaponry and funds from the Western nations.

Until 2014, it seemed that al-Assad was on shaky ground and he would be dethroned any time. By then, the rebels split with the Islamic radicals on one side and the liberal, secular groups on the other side. A year later, Russia intervened to counter the US and support the al-Assad government. These two factors helped the regime survive.

In 2016, relations between Turkey and the US deteriorated following an attempted coup that almost dislodged President Recep Tayyip Erdogan. An outraged Turkish president blamed his one-time supporter and spiritualist Fetullah Gulen based in the US and demanded that Washington extradite him. The US refused and their relationship went downhill.

If the US had calculated that it would be a quick job, like it always expects as in Vietnam, Iraq or Afghanistan, that was not to be. The civil war in Syria has stretched now for eight years. An estimated half a million people have been caught in the crossfire, killed and injured. Whole cities have all but been razed to the ground, world heritage sites have been destroyed and the scale of the damage to the country will only be known when peace returns, whenever that is.

After all this destruction, the US administration now perceives it as a wasted effort. Trump says, “We are 7000 miles away. There are no stakes in Syria”.

As for Syria’s neighbour Turkey, the concern is palpable. The Kurds, who it considers a threat to the country, have become an important player in Syria having helped the US fight the Islamic State.

The Turks and the Kurds have a long history of animosity following Kurdish attempt to secede from Turkey several decades ago. Though the attempt has all but been put down, Turkey has legally imposed severe restrictions on the Kurdish population within Turkey who for all practical purposes are second class citizens there.

It is in this context that Turkey has invaded northern Syria targeting the Kurds’ autonomous enclaves. Backed by the US, the Kurds are well armed and have de facto been running their enclaves independently, winning widespread appreciation for governing them in a democratic manner.

But, Turkey sees this as an imminent threat and has defied world opinion to attack the Kurdish territories in Syria, now that the US is no longer around to protect the Kurds. Desperate to survive, the Kurds are now allying with erstwhile rival Bashar al-Assad to push back Turkish forces.

So, what have the US and its western allies achieved in Syria? Nothing. The government of Bashar al-Assad has survived.

If Trump is pulling out US troops it is in defeat – similar to his predecessor Richard Nixon in 1973 who withdrew US soldiers from Vietnam at the end of a bruising conflict after failing to prevent a Communist takeover of that country.

Blogging, Trump’s new-found hobby, but will it last?

US FDA authorises Pfizer’s vaccine for use in children aged 12 to 15...

Joe Biden is in no rush to fix North Korean puzzle