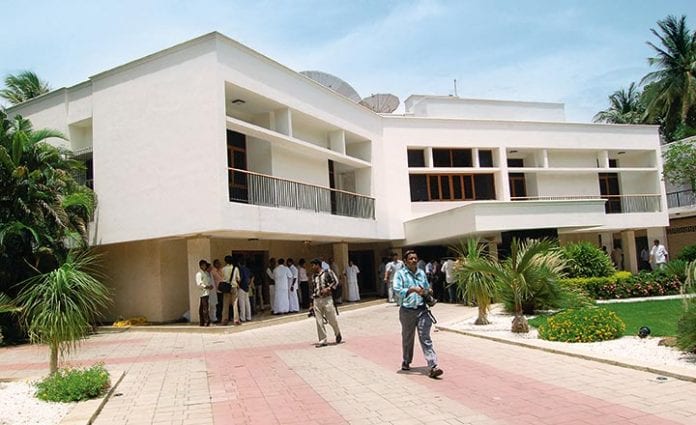 The quixotic manner in which the AIADMK government has gone about the task of trying to take possession of the Poes Garden residence of former Chief Minister J Jayalalithaa, and convert it into a memorial has come as a shock to those still sticking to the old-fashioned values of due process of law.

One wonders if the legal counsel available with the government is aware of the legal processes involved or whether their sane advice had been ignored by the powers-to-be in a reckless plan of legal adventurism.

The end result has been a loss of face for the government as the Madras High Court rejected the pleas of some AIADMK personnel to take over the administration of the property, and also by turning down the proposal of the state government to convert the residence into a memorial.

There are several things which have gone wrong in this legal tangle. Firstly, the refusal of the state administration to recognize the valid and just claims of Jayalalithaa’s niece and nephew, Deepa and Deepak, for the Class II Legal Heir certificate, denied to them by a Tahsildar in Chennai. Though the two were the only legal heirs available, their status not being in dispute, the Tahsildar has no business to deny them the certificate.

Worse still, the Tahsildar had asked them to get a certificate from a lower court, thus making them run from pillar to post for a certificate which they were entitled to get within a few days of their aunt’s death on December 5, 2016.

The AIADMK swears by Amma (that is how they regard the former CM), and yet treated her nephew and niece shabbily. The ruling party has been very keen to deny Jayalalithaa’s aide, V K Sasikala (now in Bengaluru jail after conviction in the Disproportionate Assets case in which Jayalalithaa was found guilty by the trial court of Justice Counha in Bengaluru) any role in the new dispensation.

Scared of Sasikala trying to get back to a position of dominance once she was released from the Bengaluru prison, the AIADMK is keen to prevent a return of Sasikala to the Poes Garden residence. At the same time, it is obviously not keen on Deepa being in charge of Poes Garden, and does not want her to have any role in the post-Jaya dispensation either in the government or in the party.

The strategy obviously was to try and isolate both of them and prevent them from using the Jaya residence to woo the cadres and the public of Tamil Nadu. With the likelihood of Sasikala returning to Chennai within the next few months, before the general elections to the State Assembly due in April-May 2021, the AIADMK hit upon the ordinance route to take over the residence and convert it into a memorial.

Secondly, such a plan was full of holes. Even a cursory glance at the plan would show that it would not hold water. There was already a petition by Deepa before the Madras High Court seeking her role as administrator of the residence, and for declaration that she was the Class II legal heir. There was also a petition by “Traffic” Ramaswamy against the proposal for a Jayalalithaa memorial on the ground citing moral grounds as she had been convicted, and that taxpayers’ money should not be wasted (despite this, the government had allocated ₹20 crore for a Jayalalithaa memorial on the Marina beach in Chennai).

Thirdly, yet another legal complication was the attachment of four properties of Jayalalithaa including Poes Garden by the Income Tax department for non-payment of dues amounting to over ₹16 crore by way of income tax and wealth tax. How can a property already attached by the IT department be taken over by the state government by issuing an ordinance? It is also strange that the Governor had given his approval to such an ordinance.

When the IT department filed an application in the High Court that it had attached the property (why the IT department had kept it a secret for years is another mystery), the judges asked the government to state its position. The government counsel said it would deal with the payment of tax dues as part of a compensation package after it acquired the house! Was it a case of putting the cart before the horse, or worse?

Important questions that crop up are: Should the government cough up nearly ₹20 crore to clear the dues of a defaulter (Jayalalithaa) to the IT department? If the government ought not to do this in view of such queries likely to be raised by at least a section of the people, would the ruling AIADMK pay the tax dues and enable the government to take over the property? Even here, the question of locus standi would apply as to whether the IT department can accept payment from any person other than the legal heir.

The media did not seek answers from the government on various legal issues that cropped up in this case. It has not covered itself with glory in its coverage of the Poes Garden tangle. Matters have emerged in the court, like skeletons falling out of a cupboard. A perusal of the Hindu Succession Act, 1956, and a sitting with a few lawyers would have made the media aware that Deepa and Deepak had every right to get the Class II legal heir certificate, and that they were denied the same for a few years. The media did not also raise questions about how a property attached by the IT department can be acquired by anyone, even if it was the government.

The episode raises more issues. Has someone paid for the tax dues? Will the IT department clarify on this? In view of the Madras High Court ruling, can Deepa take immediate possession of the building or will she have to get fresh court orders?

Will the AIADMK government take the stand of “once bitten, twice shy”, or will it try to re-route the possession attempt through Deepa? The AIADMK may have to give her the amount of ₹20 crore or so as a loan or a gift to pay for the tax dues, get her to take possession, and then pay her compensation in return for takeover of the residence?

This can be a tricky part, as Deepa is likely to recognise the political importance of being a resident of Poes Garden who will receive party cadres as and when they are allowed to visit the house, even if it is not a memorial. The AIADMK may not like to give her an opportunity to boost her political fortunes for fear that she could emerge as a rival centre of power. However, the AIADMK may have little option but to cajole her, provide her some kind of political role in the party, grant her compensation and hope she would co-operate with the government’s plan for a memorial.

However, some ‘suggestions’ made by the court while dismissing the pleas of AIADMK members to be made administrators, could raise some eyebrows. For instance, a suggestion that one part of the house could be a permanent residence for the chief minister of the state.

What if the DMK comes to power in May 2021? Would he like to govern the state from a house which would have the Jayalalithaa shadow, especially if another part of the residence was occupied by Deepa? Would the DMK cadres like such an arrangement? The DMK would not like to touch anything suggestive of the AIADMK with even a barge pole.

The AIADMK government will also have to present a picture of improving its governance ratings. For a start, the Tahsildar who denied the legal heir certificate to Deepa must be suspended pending a departmental enquiry, and efforts must be made to find out if some higher-ups were behind his inaction.

(The writer is a senior journalist based in Chennai)