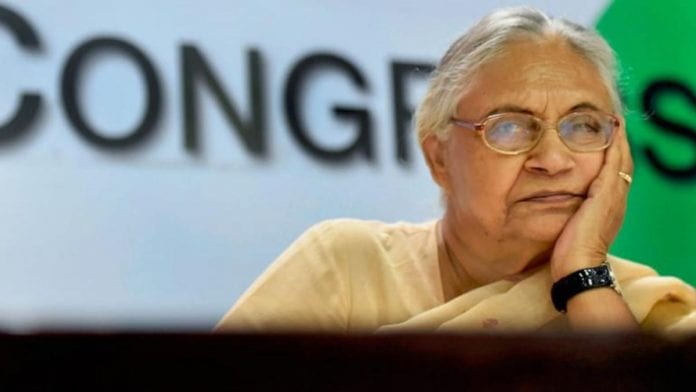 It was mid-October 2010 and a tense evening at Delhi’s Jawaharlal Nehru stadium. The Commonwealth Games were about to begin and the arrangements were far from over. When Suresh Kalmadi, the chairman of the organising committee, stood up to deliver his inaugural address, the capacity crowd began to boo. Kalmadi could not shake the contempt of the audience till he finished his speech. But, magically, somewhere in the middle of his address, when he mentioned “Chief Minister Sheila Dikshit” and her work, the mood turned. The crowd began to cheer and they continued to cheer; in fact, she received the loudest appreciation that evening.

That one incident in many ways sums up the character and personality of Sheila Dikshit. It was when everything had begun to collapse for the Congress party and its regime in Delhi and when most of its politicians were running scared, she stood as symbol of confidence. She tried to calm the nerves of the city by traveling from one venue to another. Unmindful of slush and construction materials she walked around and supervised the leaky roofs of the Commonwealth Games Village and assured the people that everything would fall in place. The city was anxious to place its best foot forward while hosting the prestigious international event and it required someone like Sheila to assure them that everything would be fine at the appointed hour.

Sheila Dikshit started as a reluctant politician, as an aide to her father-in-law Uma Shankar Dikshit. But over a period of time, she emerged as a leader in her own right. She not only managed to negotiate the complex and treacherous ways of Delhi politics adroitly, but also mastered the art of governance. 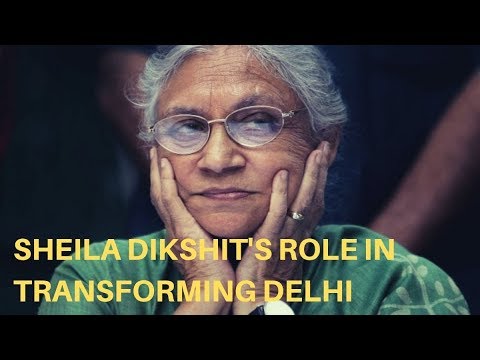 When she began her first term as chief minister in 1998, the tide  began to turn for the BJP. Atal Bihari Vajpayee took over as the Prime Minister. The challenge before her was two-fold: On the one hand she had to manage her own partymen who were faction-ridden and only looking for an opportunity to pull her down. On the other hand, she had to manage the new government at the Centre ruled by BJP.

Sheila took the challenges in her stride. She maintained a smooth and cordial relationship with Delhi’s Lt. Governor and the Union Home Ministry. Though Land (DDA), City Police (DP) and parts of NDMC remained under the control of the central government, one never heard or saw a public spat between her administration and the central agencies which has become a norm during Chief Minister Arvind Kejriwal’s regime.

Though as a politician she favoured and advocated autonomy for Delhi administration, she never used it as a weapon to strike at the Centre. In fact, whenever she got an opportunity to discuss Delhi’s vexed autonomy question during Aam Aadmi Party’s regime, she advised Kejriwal to appreciate the unique nature of Delhi and run the administration in a co-operative manner.

Her genial, easy going and warm dispensation helped her win several friends in the corridors of power. She could disarm her rivals with easy charm and humour. She was an affectionate sister to senior politicians, a trustworthy colleague to fellow professionals and an affectionate grandmother to her juniors. She could cut through the generational shift in the Congress party and was at ease both with Sonia Gandhi and her children Rahul and Priyanka.

Also read: Beloved by all, Delhi pays tributes to its architect Sheila Dikshit

If there is one thing she is known for, it is her enormous work for the city. The much maligned word ‘development’, bandied by politicians to win votes, is in fact her true legacy. She is credited with changing the shape of the India’s capital city. In her three uninterrupted terms as chief minister of Delhi, 87 flyovers were built, easing the city traffic considerably. When the city was choking with diesel fumes, she smoothly implemented CNG as alternate fuel for public transports. Buses, autos and other public vehicles gradually switched to CNG, bringing down the city’s pollution levels considerably. The city was not subjected to the kind of political noise as one hears during Arvind Kejriwal’s attempts to implement the failed Odd-Even scheme.

Shiela Dikshit was the chief minister when the capital saw true revolution in transport. The Delhi Metro is a shining example of co-operative federalism aimed at delivering public good to its citizens. Sheila is also credited with starting the Bhagidari System which involved local communities in shaping the future of the city. She even allotted funds for local area development. Some of these funds were transferred to these communities. It is considered a successful scheme in gentrification of urban areas.

But it wasn’t as if everything went smooth during her regime. Though she was extremely sensitive towards women’s empowerment and gender issues, she faced flak for her remarks over journalist Soumya Vishwanathan’s killing. The TV journalist was shot dead by goons while driving back home after a late night shift. In an ill-advised remark, Sheila said “Girls shouldn’t be so adventurous” (driving home late and alone). This sparked enormous public anger, thrusting the case firmly into the public consciousness. A campaign called “Justice for Soumya” spread across urban India forcing the then government to act swiftly.

Sheila again caught herself on the wrong foot when the 2012 Nirbhaya gang rape case shook not only Delhi, but whole of India. The brutality of the crime shook the roots of the Delhi administration and the Central government. Though technically Sheila Dikshit was not in-charge of Delhi police and it fell under the Union government, she had to take the blame as Congress was in power, both in the state and at the Centre.

Sheila and her government, despite all the good work done over the years, was completely swept away by the subsequent political movement launched by Aam Aadmi Party in Delhi and impacted by the overall growth of the BJP. As a result, the Congress party in Delhi ended up with one of its worst performances. But this did not deter Sheila. She continued to stick with her party and tried to rebuild it.

The nationwide fall of Congress party and its leadership failure hit Delhi in equal measure. In 2019 elections, Sheila did try to build her party’s fortunes by courageously standing as a party candidate against BJP’s Manoj Tiwari who would be her son’s age, and lost.