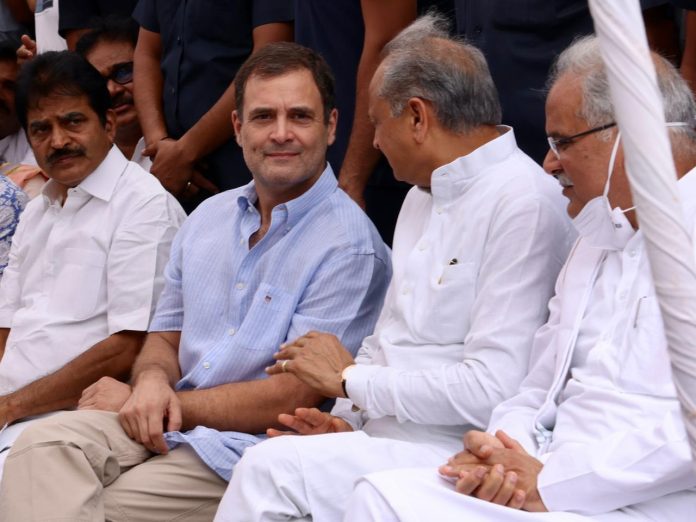 The Congress establishment is keener to demonstrate its legitimacy, now that its authority has openly been defied, than to salvage the party.

The Congress would appear to be in the grip of a death wish, and yet, it shows signs of life and the will to survive.

The party leadership wants to anoint a puppet president, who is expected to keep nodding in bland agreement as the Supreme Leader, who shirks formal responsibility, calls the shots from wherever he is, whether trudging from the south to the north of the country or on yet another impetuous jaunt abroad.

It wants to defenestrate a chief minister who had wrested a key north Indian state from the BJP and, later, foiled the BJP’s attempt to topple his government by inducing the defection of a section of the party’s MLAs. In that chief minister’s place, the Supreme Leader, who lacks formal authority to wield the power he assumes within the party, wants to install the very traitor who acted as the BJP’s cat’s paw and tried to break the Congress parliamentary party and finish off one of the two Congress-run governments that remained after Scindia’s demolition job in Madhya Pradesh.

The revolt of Congress MLAs in Rajasthan shows the limits of leadership formed by the womb. Leadership formed by working for the party and earning the trust and support of party workers and elected representatives has refused to kneel before the self-injurious whim of the Supreme-Leader-by-birth.

This is a sign of something other than undiluted sycophancy flowing through the veins of the party’s workers. That, and the decision to contest the Congress presidential election by the old warhorse, Digvijaya Singh and by Shashi Tharoor, who has a degree of support outside the Congress as well, hold out hope for the party’s survival.

The Congress establishment is keener to demonstrate its legitimacy, now that its authority has openly been defied, than to salvage the party. It has served show-cause notices to three leaders who organised a meeting of 90 of the party’s 102 MLAs in Rajasthan. The decision that they would resign, rather than let the party high command walk all over them by foisting Sachin Pilot as chief minister in place of Ashok Gehlot, was taken at this meeting. Sachin Pilot has the backing of just 12 party MLAs — and of the Supreme Leader.

The party slavishly accepted Indira Gandhi’s recasting of the organisation as a family enterprise because she was a leader, who inspired the people and got the party elected to office. Her power and charisma rubbed off on her son Sanjay Gandhi, too. The fact that most of the party’s current crop of senior leaders had been spotted and elevated to the national stage by Sanjay Gandhi shows that there was something more to him than the arrogance of power and being the anointed successor to Indira Gandhi. But he crashed those succession hopes into the ground, along with the plane he piloted.

Rajiv Gandhi, the actual successor, was a gentleman and a disaster, who disdained politicians, had few principled convictions about the Idea of India, and so, blundered into serial mistakes such as appeasing reactionary Muslim sentiment with the Shah Bano amendment to deprive divorced Muslim women of maintenance and allowing the shilanyas of the Ram temple at Ayodhya. Wily VP Singh had little trouble outplaying him and casting him in the role of a crook who stole the nation’s funds via the Bofors arms deal.

Also read: Men and rape: When the garland becomes a weapon of war

To Rajiv Gandhi’s credit, he seemed to learn from his mistakes. He relaunched his political career with the campaign for the 1991 elections, but was assassinated before he could prove himself. Narasimha Rao’s term in office proved an interregnum rather than a permanent break with the Gandhi family’s leadership of the party, thanks to his failure to secure victory for the Congress in 1996. Had the Congress got a majority in 1996, Congressmen would have forgiven his presiding over the demolition of the Babri mosque, and not dumped him into the dustbin of Congress history long before his death.

Had Rao’s successor Sitaram Kesri shown signs of being able to reverse the party’s decline, he would not have been replaced before the Lok Sabha elections of 1998. Sonia Gandhi took over as the party’s great white hope.

Sonia Gandhi’s strength was that she knew her limitations, and was more than happy to listen the advice of Congress leaders. They were happy to have her at the helm. The Congress won two Lok Sabha elections under her leadership. Electoral victory is the glue that sticks Congressmen to a leader.

Rahul Gandhi did not just preside over two Lok Sabha election defeats, he saw the party routed. Instead of facing up to a serious examination of what was wrong with his leadership, he resigned, and donned the mantle of Supreme Leader, his spirit in charge of the party even when his corporeal self was trotting the globe.

Apart from being a national leader who wins elections, Congress workers want their leader to be something else: a broker of peace in the factional war that rages in every state unit, someone who arrives at an equilibrium that leaves every faction equally unhappy, if not equally happy. Rahul Gandhi proved to be a failure in this game, too. His highhanded remaking of state units has produced demoralisation, desertion and electoral defeat.

Rahul Gandhi has surrounded himself with a set of people who are bright, intelligent, social-media-savvy, loyal and articulate. They have only one deficiency – no one can get themselves elected or strategise an election victory. They are leaders because they are close to Rahul Gandhi.

Now that Gehlot has made it clear that he is not quite cast in the puppet mould, one of these people might be chosen by the Gandhis to become the party president. There is only one hitch. Veteran Congress insider Digvijaya Singh has joined the relative newcomer Shashi Tharoor in deciding to contest the election, for whatever it is worth.

Digvijaya Singh knows the party inside out and he understands the polity as few in the current leadership do. Tharoor is not popular among party leaders, but he gets elected by voters on his own strength and enjoys respect and goodwill outside party loyalists. Neither is hostile to the Gandhis, nor will they be willing puppets. The Congress presidential election promises to shake things up inside the party. That would give an outlet for the imaginative enterprise of the kind shown by the Rajasthan MLAs who refuse to accept a traitor as their leader, defying the will of the Supreme Leader.

Also read: Nitish Kumar is a wily politician; is there a counter to his gambit?

Rahul Gandhi shows no sign of appreciating that he lacks the two essential qualities that Congressmen require in their leader: the ability to make successful war on the political opposition and the knack of making peace within the party, without demoralising or alienating any leader overmuch.

It would be useful if someone could impress on him that there could be just one Gandhi in the party’s history with the moral authority to bend the organisation to his will even without holding any formal office. When he tries to imitate Gandhi in wielding influence minus institutional sanction, he forgets that old adage, that events and personages occur twice in history, the first time as tragedy, and the second time as farce.

(TK Arun is a senior journalist based in Delhi)