If life gives you a Rafale, use it to make lemonade. Unless Rajnath Singh believes in this old adage, it is kind of surprising that he stopped at sacrificing just a few lemons while taking delivery of a magnificent creation like the Rafale in Paris on October 8.

Since his act was an ode to “tradition and culture”, he should have gone back a little further in history—say around 3,000 years—and performed a Vedic sacrifice befitting the occasion in the heart of western culture.

In fact, there is a Vedic poem— Nasadiya Sukta, in case you want to know the details—that would have been just right: “Where did this creation come from?”

For god’s sake, it’s the Rafale, not a Renault tractor. Each one of the fighter jets, reportedly cost us (since the official price, like Voldemort, can’t be named) around ₹1,600 crore. Its acquisition called for nothing less than an Ashwamedha Yajna. But, tsk, tsk, all Singh could think of was placing two teeny-weeny, itsy-bitsy lemons beneath its wheels!

Lemons, in case you are not well versed with a particular variety of Indian culture, are for petty things. For instance, when Indian traders open a new shop, they hang lemons and seven chillies from the main entrance to cast off bad luck.

The average Indian, devoid of the great fortune of owning a shop, places lemons and chillies in the middle of intersections in the middle of the night with the hope of passing off their bad luck to some hapless person who would accidentally tread on them.

Now, if Singh were of the opinion that placing lemons and chillies on busy chaurahas (intersections) were enough to curse an enemy to ill health and misery, he would have been better off sending an enterprising person to find a suitable spot near Bani Gala, the posh Islamabad locality where Imran Khan has a palace.

Come to think of it, a war of lemons and chillies with Khan would have been much fun, considering that the Pakistan premier too is rumoured to be of the Vodoo school of thought. His ex-wife Reham Khan had disclosed juicy details of her ex-husband’s experiments with the occult—including the alleged habit of massaging his private parts with lentils—in her succulent eponymous autobiographical account of her short-lived marriage. By her account, Singh’s lemons vs Khan’s lentils would have been much more fun than Rafale vs F-16. But, that’s not exactly the point here.

You could, of course, argue that this fascination with lemons and lentils is pure bunkum—nothing but superstition passed off as faith, tradition and culture. No sane person in this world ever paid ₹1,600 crore for a fighter jet only to put its fate in the hands of two citrus fruits whose most lethal effect is arguably as the rinds perched on glasses filled with Bloody Mary.

You can also say that humanity’s most potent weapon in the fight for survival is critical thinking, and placing lemons under a marvel of science is an insult to it. But, that’s Hindutva India for you—a civilisation that wants to ride Rafales but power them with cow piss and superstition.

This mix of obscurantism, culturalism and nationalism has its advantages since you can pass off its critics as anti-national and anti-Hindu easily. Notice how Amit Shah has grabbed the Congress by its lemons for criticising Singh’s antics in Paris. At an election rally in Haryana, the home minister said that Singh performed shastra (weapon) puja in accordance with Indian traditions. “Is shastra pujan not performed on Vijayadashami?” he said, accusing the Congress of being against Indian traditions.

On the subject of shastra puja (worship of weapons), Shah is both right and wrong, depending on geography and history. In Haryana, where Shah pilloried the Congress, not many would have been aware of the custom of worshipping weapons—in most of north India, Dusshera marks the victory of Lord Rama over Ravana and, by inference, the triumph of good over evil. Most north Indians are happy on this day to see Ravana’s effigies burn at large melas.

But, it can be easily argued that, in the Narendra Modi era, we do not actually need a ritual like shastra puja.

Most historians believe that the concept of shastra puja was prevalent in the warrior class. In its original form, the ritual signalled the start of the battle season after the rains (when soggy earth and overflowing rivers made fighting impossible) and nine nights of praying and fasting. In its original form, it entailed the sacrifice of a human—later replaced by animals. 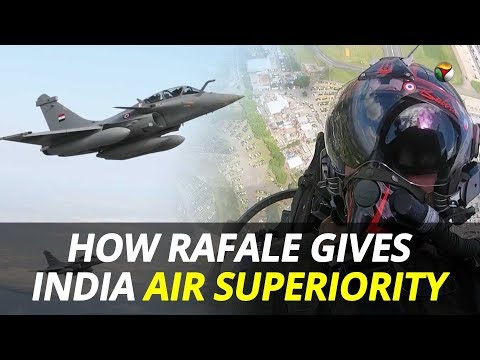 But, but, but… The idea of sending your jets across the border on a clear night has, of course, been turned on its head in the Modi regime. Now, prime ministerial wisdom suggests that they should be sent under the cover of clouds to avoid detection by radars.

Since the very edifice of the rationale of fighting after the rainy season has been dismantled by the Modi government, it stands to reason that a ritual seeking divine blessings for battles waged under clear, moonlit skies is equally outdated. As Modi famously said, “Badal the, bas chal pade.”

Too far-fetched, you’d say. Yes, but not more than the idea of squeezing lemons under the wheels of a jet as the high point of Indian culture.