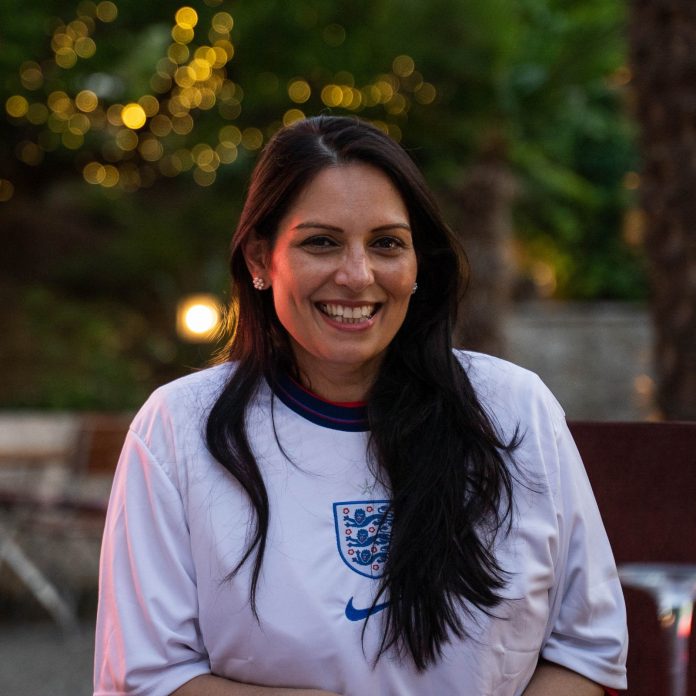 UK’s Indian-origin Home Secretary Priti Patel has got herself embroiled in a race row over the English football team. Ironically, Patel was accused of hypocrisy over her stance on racism in British football after she condemned the abuse of three black players in the team. This was because she had refused earlier to criticise fans who booed the team for ‘taking the knee’.

Patel, whose parents hail from Gujarat, said she was appalled by the social media abuse of Marcus Rashford, Jadon Sancho and Bukayo Saka, after they missed penalties in the Euro 2020 final at Wembley Stadium, resulting in England losing the cup. The 49-year-old Patel said she was “disgusted that England players who have given so much for our country this summer have been subject to vile racist abuse on social media”.

I am disgusted that @England players who have given so much for our country this summer have been subject to vile racist abuse on social media.

It has no place in our country and I back the police to hold those responsible accountable.

“It has no place in our country and I back the police to hold those responsible accountable,” wrote Patel on Twitter.

Her statement is important considering that as Home Secretary the country’s police force is in her charge. No sooner than she tweeted, a storm of accusations was unleashed against her and her boss Prime Minister Boris Johnson for not calling out racism initially.

Football is to Britain what cricket is to India. The nation had pinned all its hopes on the young English team, which had managed to get so close to winning a cup final for the first time since 1966. Despite having top-rated black (African descent) football players, English football and some football fans have been accused of being racist even in the past.

As a mark of support to the anti-racism movement, the English football team at the beginning of the tournament had taken the knee (knelt on one knee) at the start of its first match, to which some fans had booed. Instead of condemning the booing, Patel had accused the footballers of ‘gesture politics’, and even said that to boo the England players was a “choice” for fans to make.

Tyrone Mings, a black England footballer, set the ball rolling with his response to Patel’s criticism of the racist abuse against the three black players.

“You don’t get to stoke the fire at the beginning of the tournament by labelling our anti-racism message as ‘gesture politics’ and then pretend to be disgusted when the very thing we’re campaigning against happens,” Mings tweeted.

Own goal by party colleagues

Patel faced flak from members of her own party, who called her and Johnson out for indulging in ‘dog-whistle’ politics. “If we ‘whistle’ and the ‘dog’ reacts, we can’t be shocked if it barks & bites. Dog whistles win votes but destroy nations,” tweeted Baroness Sayeeda Warsi, former co-chair of the Conservative party and Patel’s senior.

“As a proud centre-right politician, as a proud part of a diverse, vibrant nation that produced a football team that spoke to and represented England in all its modern diverse glory, it shames me that in 2021 some in politics are still playing fast and loose with issues of race,” added Warsi.

Labour Party members were even more stinging in their disapproval. Patel and Johnson “gave licence to the racists who booed the England players and are now racially abusing England players. They are like arsonists complaining about a fire they poured petrol on – total hypocrites,” said Angela Rayner, Labour’s deputy leader. Rayner has demanded that Patel apologise for her comments.

After her initial tweets Patel has fallen silent, but her comments have been haunting Johnson wherever he goes, with journalists questioning him on his position. Labour leader Keir Starmer even challenged him to distance himself from the Home Secretary’s dismissal of the England team’s decision to take the knee as a ‘political gesture’ during Prime Minister’s questions in Parliament, but Johnson gave an evasive reply.

The Prime Minister has been a staunch supporter of Patel, and has stood by her in all the previous scandals she has been embroiled in. Many argue that this is to repay her for her loyalty to him since he first embarked on the Brexit campaign.

So far Johnson has not said anything directly about Patel, but his official spokesman has told reporters: “The Home Secretary is working every day to clamp down on hate crime, racism and violence.”

However, Patel’s ethnic origins and colour are being trotted out as a defence for her comments. “Priti Patel has spoken very movingly in the House of Commons about her own experience and suffering from racism,” said Grant Shapps, Transport Minister, implying that she hence cannot be accused of being soft on racism.

Many British-Asians consider Patel to be ‘more white’ than her white Tory counterparts. She is called a coconut — brown on the outside and white on the inside. Patel, a great fan of Narendra Modi since his days as Chief Minister of Gujarat, has self-confessedly modelled herself on the late Tory Prime Minister Margret Thatcher, who was equally divisive during her time in politics.

The race row is unlikely to go away quickly but with Johnson backing her, Patel is bound to survive. However, she has lost face yet again and may be forced to tender an apology to bring the whole episode to an end.

No Holding him back: IPL is not cricket; quota system no solution