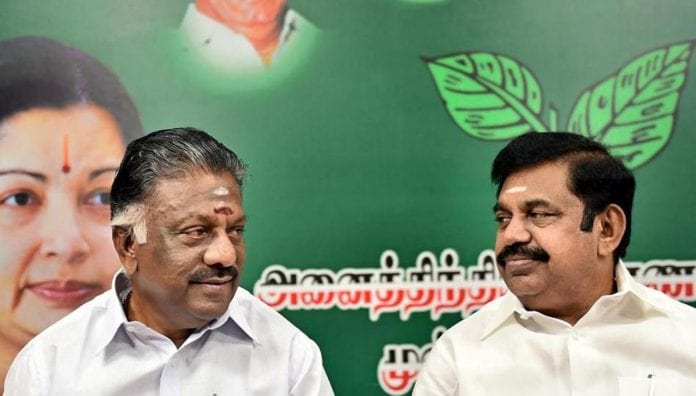 If one were to throw a chair, that distance could be as far as the trust between Tamil Nadu CM Edappadi Palaniswamy and his deputy O Panneerselvam.

When the CM leaves on his UK and US tour on August 28, the simmering differences will be too obvious as Palaniswamy is not inclined to have OPS take over in his absence, though it would be only for a few days. Instead, he is planning to have a team of three ministers to handle any exigency while he is away.

EPS has never taken kindly to OPS leading a revolt against his leadership. It is also no secret that, though OPS came back to the cabinet and the party as Deputy CM and coordinator of the ruling AIADMK, he has been eyeing the CM post, and is not yet reconciled to being number two in the cabinet.

This is because, on the three occasions when party leader J Jayalalithaa had to step down due to court orders in corruption cases, it was OPS she picked to head the government in her absence. Thus, when Jayalalithaa breathed her last, OPS expected a smooth takeover.

Also read: TN CM Palaniswami to make his first foreign trip to the US, UK to woo investors

Although he was installed as CM, it was for a brief period as Jayalalithaa’s ‘sister’ VK Sasikala first took over the party leadership and then staked her claim to be chief minister. With the Centre blocking Sasikala’s bid and ensuring that she went to jail, OPS thought that his time had come again. However, Sasikala chose EPS to be CM. It is an open secret that the BJP leadership at the Centre tried to make OPS the CM. For several months, the attempts continued.

Things took a dramatic turn once EPS loyalists P Thangamani and SP Velumani created their own links with BJP ministers and its leadership. Equations between PM Narendra Modi and EPS improved, and the NDA government at the Centre found in EPS as willing an ally as OPS.

Once, then Defence Minister Nirmala Seetharaman refused to meet OPS in what was seen as a public snub. OPS, who could meet the PM, union ministers, and BJP leaders in Delhi at will, suddenly found himself being left out in the cold.

Although they were cordial towards him, the BJP had sent a clear message that it was not interested in interfering in the internal affairs of the AIADMK, and that it would not destablise the EPS government to make OPS the CM.

The efforts of OPS to become CM with the blessings and push of the BJP has thus come a cropper, while EPS has stabilized his position both in the State and at the Centre.

The strong Gounder-western Tamil Nadu lobby among ministers and party MLAs has ensured that EPS gets the full and unstinted support, both in running the government and the party.

It is, therefore, a disgruntled Dy CM who is forced to eat humble pie and take a back seat, while EPS supporters get all the plum posts.

If EPS is still suspicious about OPS’ strategies, none can blame him as the moves against the government led by Kumaraswamy of JD(S) in Karnataka gained momentum during his foreign trip. Apparently, EPS does not want to take chances. He also does not want any undue importance to be given to OPS.

While in public, the EPS and OPS camps maintain that the dual leadership formula pays dividends, privately, the camps admit that a duel is on and that it would weaken the party in the long run.

For first time, no Opposition delegation will meet US Prez during of...