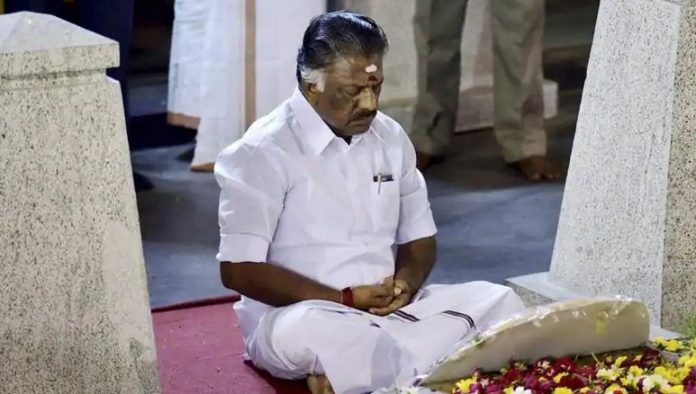 Like Julius Caesar, Ottakarathevar Panneerselvam, popularly known as OPS, can claim that thrice he surrendered the ‘Crown’ when offered. In his case, he was actually king, but chose to step down on each occasion for his party, the AIADMK, twice for his leader J Jayalalithaa, and once for her companion, ‘sister’ VK Sasikala.  His loyalty was such that it earned him high praise from ‘Amma’ too. Having been Jayalalithaa’s choice as her replacement and earning the tag of ‘loyalty and ‘extreme sacrifice’, OPS is now struggling in his bid to realise what he considers his ‘rightful claim’ — the chief minister’s chair. However, recent developments have shown that the determined OPS has thrown his hat in the ring, and will go for broke in April 2021.

The AIADMK, riven by groupism, seemed to have another round of convulsions on Independence Day after posters appeared all over Theni district, the home district of OPS, hailing him as the next chief minister. This was in apparent retaliation to minister Rajendra Balaji’s description of Edappadi K Palaniswami (EPS) as the permanent chief minister of Tamil Nadu. A truce was worked out by a group of ministers after shuttling between the residences of OPS and EPS. Amidst strain in the ties, the top leaders have merely agreed not to rake up the issue of chief ministership now, but concentrate on the Assembly elections round the corner. However, the patch-up is so fragile it may not hold for more than a couple of months. Once, the contentious issue of tickets to candidates for the Assembly elections is taken up, groupism is bound to peak as both sides will aim at giving party tickets to their supporters and ensuring they have maximum support after the general elections. If and when the AIADMK has the majority to have another stint of power in May 2021, both OPS and EPS would need to have the numbers on their side.

In effect, the post-election tussle will be preceded by a pre-election bout as the rival groups would look at securing party tickets for most of the seats.

At the moment, EPS holds the upper-hand with nearly 110 MLAs supporting him, while OPS has the support of less than 10. His support-base among MLAs has in fact dwindled since August 2017.  This time, as the co-ordinator of the party, which means the number one position in the party, OPS will try to secure at least 50 per cent of the seats for his supporters. As Joint co-ordinator, number two in the party, the chief minister has the strong backing of a powerful group of ministers, particularly from the western belt of the state, his home district of Salem and the adjoining places in the Kongu belt like Coimbatore, Tirupur, Erode and Namakkal among other districts. EPS will look to retain over 40 MLAs from these districts. OPS, on the other hand, is looking to consolidate his strength in the Thevar belt of the southern districts. The Thevar community had a strong, dominant presence in the AIADMK, especially when Sasikala exercised remote control of the party.  That this group is now divided between the Sasikala faction and the OPS group is to the advantage of EPS.

The man who launched the ‘Dharma Yuddham’ against Sasikala and her family and insisted on their ouster from the party as a pre-condition for merger of his group with the main AIADMK, and became a popular figure from February to August 2017, O Panneerselvam could not sustain the popularity after his merger with the EPS group and becoming deputy chief minister. He is now looking for other ways to expand his popularity base.

Was there an understanding, at least an unwritten one, in August 2017 that EPS could complete the present term and that the next term (2021) would be for OPS? The supporters of Panneerselvam believe that there was such an unwritten understanding, and that was why OPS came down from his demand for chief ministership.  However, the EPS camp says there was no such understanding. There might have been a mention that the issue of 2021 would be dealt with at that time, which could give the OPS camp some hope but no clear-cut assurance. Meanwhile, the EPS camp used the time to steps to strengthen itself, and weaken the OPS group.

OPS is understood to have reiterated his view to the group of ministers that he had agreed to support EPS as chief minister only for the time being, and that the next term of office should be his. Having stood by that decision for over three years, OPS believes EPS should reciprocate and support him for chief ministership in 2021. However, things have changed from August 2017 with EPS assuming more powers and trying to reduce the support base of OPS. Almost all the ministers are behind EPS as they view OPS as a rebel and treat him as such.

OPS has no option but to wait for a fresh count of MLAs in the wake of the 2021 elections. That is why he is keeping the gunpowder dry. His supporters believe that the BJP and some others like Rajinikanth would support OPS move for chief ministership. Officially, OPS denies his chief ministerial ambitions. Unlike Julius Caesar, OPS does not have a Mark Antony to rouse the masses and the AIADMK functionaries for him. OPS may refute it but he is lying low, waiting for the opportune moment to strike.