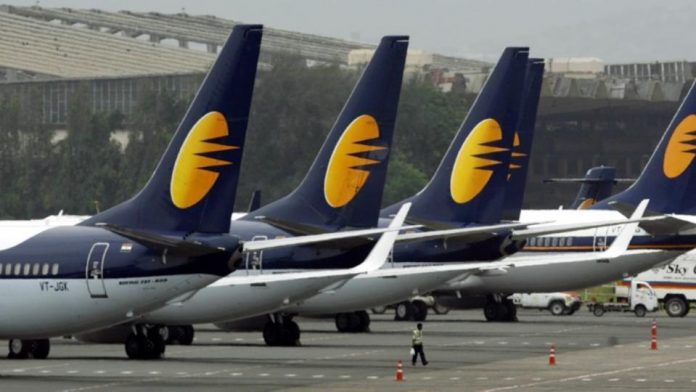 Like vultures which eat away every bit of the flesh leaving only the skeleton, the country’s full-service carrier, Jet Airways finds itself in a similar situation.

The beleaguered airline currently cooling its heels at NCLT (National Company Law Tribunal) may have nothing to offer to potential investors except its brand name. Considering the fact that the airline’s heft came from a variety of top-notch services put together, Jet finds itself in a rather sorry state of affairs.

But who has been responsible for bringing Jet Airways literally on “all four”? You can point your finger at the lenders, or at government policies or at low-cost airlines. Or all three.

But first, let us take a look at how Jet Airways disintegrated into virtually nothing. A year ago, Jet Airways had a rather healthy market share of 20 per cent. At its peak, the airline’s fleet size was 119 aircraft consisting of the long haul Boeing B777s and medium-haul Airbus A330s. It had 70,000 international seats per week and about 766 airport slots. There were about 22,000 employees and a market cap of ₹4,000 crore.

Unable to raise further loans from the lenders, Jet Airways was forced to temporarily suspend its operations from April 2019 as it could not pay salaries to its employees, leasing charges to lessors and buy fuel. When the airline was grounded, its total debt from lenders was about ₹8,500 crore while unpaid dues to employees were ₹750 crore and dues to vendors and others totalled ₹14,000 crore.

With Jet literally operating on one leg for most of the first few months of 2019, it changed the fortunes of low-cost carriers, SpiceJet and IndiGo.  In a matter of weeks, the government stepped in to shift landing and take-off time slots to other domestic airlines including SpiceJet and IndiGo.

The Ministry of Civil Aviation granted 479 slots out of 766 to various airlines. Spicejet got 130 while IndiGo 127, full-service carrier, Vistara received 110, budget carriers GoAir and AirAsia 44 and 42 slots respectively. National carrier Air India got 26 slot and its regional subsidiary, Alliance Air 2.

For Spicejet, 68 out of the 130 slots have come at Mumbai airport, the business capital of the country which allowed the airline to add 50 domestic and international flights connected Mumbai. The airline has also been quick to pick up Jet Airways’ 28 aircraft while Vistara which has a tie-up with Singapore Airlines plans to take six Boeing 737s earlier operated by Jet.

According to an analyst with a brokerage firm, Spicejet is perhaps the biggest beneficiary of Jet’s grounding. He said he expects a significant portion of lost passengers to flock to Spicejet given the distribution of slots. This should cause growth at SpiceJet to return to 2-3x to industry’s, the analyst said in his note to investors.

The first indications of how SpiceJet and IndiGo had benefitted from the disintegration of Jet Airways came out during the fourth quarter results of the two low-cost carriers. The March quarter is seasonally a weak one, and hence airlines’ performance is rather muted during that period. In fact, the aviation consultancy firm, CAPA had forecast that India’s most successful airline might break even or at best post modest profits. But this time, the scenario was completely different. Both the airlines which had posted either losses or a downward slide in profits, saw their numbers shoot up.

On a year-on-year basis, IndiGo’s profits grew five-fold in the quarter to ₹590 crore while SpiceJet’s profits increased 22 per cent to ₹56 crore. IndiGo’s yields (average fare) saw a 12 per cent jump while that of SpiceJet grew 11 per cent. The number of passengers which IndiGo carried grew 17 per cent and for SpiceJet, it grew 13 per cent. This was achieved despite the grounding of Boeing 737 Max aircraft following growing safety concerns about the aircraft.

The first quarter of the new fiscal year (2019-20) will see a further increase in all parameters for these two airlines and perhaps a few more.

When Kingfisher Airlines went down in 2012, about seven years after it commenced operations, the domestic airline sector had to pay a heavy price for its demise in the form of collateral damage. Newer airlines like Air Costa had to pay at least two times the charges for taking on lease aircraft and had to induct whatever aircraft it could lay its hands on.

This time around, the situation had changed completely. The government was quick to allow slots to the rest of the airlines and seemed quite well-prepared for such an eventuality even though it was in the midst of the General Elections.

Need for red flags on time

A government which is normally slow to react to anything that needs its urgent attention had shown unusual alacrity. As an analyst pointed out, the biggest beneficiary of the allocation of slots was Spicejet whose chairman Ajay Singh is known supporter of the BJP.

Industry watchers believe that the government may have known all along that Jet Airways would wind up its operations sooner than later. Hence, was ready with a rescue plan not for Jet Airways but for SpiceJet in particular and for the others in general.

Analysts say that the government should lay down norms, have regulations in place so that red flags are raised whenever any particular airline slips into the danger zone so that a repeat of Jet Airways does not occur. The new government should make systematic changes for the aviation sector starting off with bringing aviation turbine fuel under the purview of GST. It should subsequently allow setting up of low-cost airports closer to major airports so that low-cost airlines can stay low cost. An eco-system which allows both low cost and full-service carriers to co-exist will not only benefit the passengers but also the exchequers of the various states.