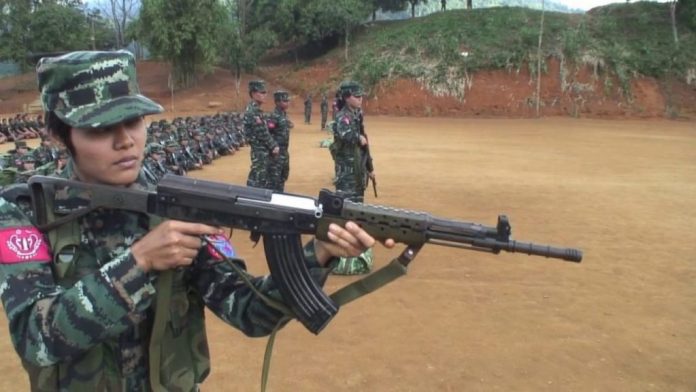 Myanmar’s military junta is fast losing control over large swathes of territory, especially in the strategic coastal province of Rakhine that may necessitate an urgent rethink in New Delhi’s policy towards this troubled nation.

In the last two months of heavy fighting with the separatist Arakan Army (AA), which reneged on the tenuous ceasefire signed just after the February 2021 coup in Myanmar, the Burmese army Tatmadaw has lost control of nearly two-third of the coastal Rakhine province.

This is where the port of Sittwe (renovated with Indian funding) and the deep-sea port of Kyaukphyu (funded by China) are located. The Yunnan(China)-Kyaukphyu oil and gas pipeline originates in Rakhine, as does India’s Kaladan Multi-Modal Transport Project to provide a sea-to-land access to the country’s north-east region.

The AA is now involved in bitter fighting with the Tatmadaw, as it tries to take control of Maungdaw township in northern Rakhine, bordering Bangladesh. The hostilities are tending to spill over across the border and Bangladesh has protested thrice already in September against the shelling of its border villages and airspace violations.

The junta has blamed these on the  AA rebels – but Dhaka feels the Tatmadaw is actually trying to create border tensions to forestall Sheikh Hasina’s renewed efforts to get the repatriation of the Rohingya refugees started.

The AA, perhaps seeking support from the Rohingyas, want to take Maungdaw to gain control of the lucrative border trade with Bangladesh. It has already said it will ensure safe rehabilitation of the Rohingyas – a move that will improve its international acceptability and help it emerge as the de facto ruler of Rakhine, a dream long cherished by Arakanese separatists.

The AA has played its cards brilliantly. When the military junta stretched its resources far too thinly by brutally suppressing the pro-democracy movement that led to the emergence of new Bamar (ethnic Burman) insurgent groups, the Arakan Army signed a ceasefire agreement after the February 2021 coup that helped it regroup, rearm, recruit and refurbish.

As the Tatmadaw was forced to cope with fresh fighting with many ethnic rebel armies like the Kachin Independence Army (KIA), the Arakan Army quietly beefed up.

Today, it has 30,000 heavily armed guerrillas fighting a demoralised and overstretched Myanmarese military which just cannot hold ground. This includes at least 6,000 fighters in areas controlled by its allies in Kayin, Kachin, and Shan states, as well as elsewhere in Myanmar. The AA  has also extended effective control over parts of the Chin State, including the strategic Paletwa junction, which is so important for India’s Kaladan project.

On September 16, the AA’s deputy commander-in-chief ‘Brigadier General’ Nyo Twan Awng, in a social media message, described the resumption of hostilities two months ago as “a final decisive war for building the state of the Arakan”.

This was no hollow publicity stunt – the rebels now plan to take the fight to the final stage, where they can force any central authority in Myanmar to concede effective autonomy to the United League of Arakan (ULA), the political principal of the Arakan Army. At the very least, the ULA would announce a parallel government and exercise de facto control over the strategic province that could force countries like China, India and Bangladesh to directly deal with the ULA-AA.

Up in the north, the Kachin rebels have not only expanded their effective control over much of the Kachin province but shown enough confidence by opening a university and deciding to take charge of higher education in the province bordering China.

A desperate military junta is now seeking to reopen dialogue, perhaps with Chinese help, with some other powerful ethnic rebel armies like the United Wa State Army (UWSA) and the Kokang rebel group MNDDA. These groups already control huge territories on the China-Myanmar border and the junta has avoided conflict, especially with the Wa group, which is even armed with Chinese anti-aircraft batteries and helicopter gunships.

Since 2009, the UWSA has run the Wa State Government Special Administrative Region that gives it full control over a vast area which was once the liberated zone and headquarters of the now-defunct Burmese Communist Party.

The military junta is not only losing more and more territory but also is unable to control the increased aggression of the Bamar rebels of the People’s Defense Forces (PDF).

The PDF is officially the military wing of the parallel National Unity Government (NUG) that has brought together a wide political and ethnic coalition upholding the vision of a democratic and federal Myanmar, where the military will be sent back to the barracks and operate under political control.

In September, an urban Myanmarese rebel group assassinated Ohn Thwin, a retired general and former ambassador, at his home in Hlaing Township in Yangon. His son-in-law Ye Tay Za, a retired captain, was also killed in the attack.

The responsibility for the attack was claimed by the Inya Urban Force, one of the dozens of anti-regime resistance groups that have sprung up to resist the military junta. The killing was confirmed and condemned by junta spokesperson Maj-Gen Zaw Min Tun. Not only are these resistance groups gaining more strength and popularity, they are able to choke the military’s intelligence by attacking informers.

The military junta is also unable to bear the cost of continuous operations as the national economy wilts under the global adverse headwinds triggered by the Ukraine War. The central bank has asked all Myanmar nationals to deposit foreign currency with it, suggesting a huge forex crisis. Military units fighting rebels are further demoralised by their failure to pay salaries on time that has led to substantial desertions and defections.

For neighbours like India, a policy rethink seems to have become essential. Delhi’s bonhomie with Myanmarese generals is unlikely to bear fruit for India’s counter-insurgency operations because the Tatmadaw is fighting too many domestic rebel groups and is in no position to dislodge the north-east Indian rebels based in its Sagaing Region.

The junta not only may use them against the PDF but also help them gain strength at the prompting of the Chinese, whose influence on the generals is preponderant. In fact, the assumption that India should not upset the generals because it will drive them into tighter Chinese embrace is gravely flawed. They are already in China’s pocket.

India will soon have to find a way to deal with multiple stakeholders, specially the rebel groups like ULA-AA and KIO-KIA, who control large territories near the Indian border.

There is no way India can just count on the military junta to complete the Kaladan Multi-Modal Transport Project and operationalise it. The Arakan Army tried disrupting the project after the Indian army dismantled the rebel bases in remote southern parts of Mizoram by initiating “Operation Sunshine”.

But the AA is now keen to deal with India on its own, as is the National Unity Government. India can neglect the emerging reality in Myanmar only at its own peril. Its wait-and-watch so far has proved counterproductive. If the Modi government is serious about Act East through Northeast, it has to play a meaningful role in Myanmar.

(Subir Bhaumik is a former BBC correspondent and author of five books on South Asian conflicts.)