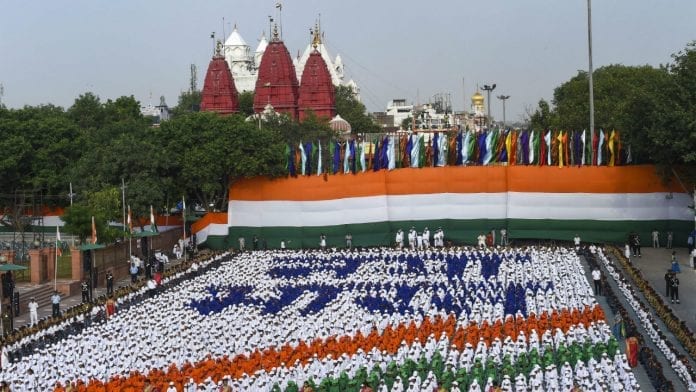 An American playwright called Felipe Ossa once suggested that slowdown in an economy can be best handled by something called “economic concubinage”.

For this he argued, albeit satirically, the rich and the affluent be allowed to take debt-ridden, low-income, jobless people — regardless of age, sex, preferences — as concubines who would participate voluntarily on the principle of getting as good as they gave. He called his prescription, “The Ultimate Stimulus”.

We will not go so far as to suggest something so radical for the Indian economy that’s down in the dumps with a growth rate of 5% on sildenafil citrate. (Minus the statistical stimulant it is less than 3%). But since unreal times call for unreal measures, the time is real right for some out of the bed, er, out of the box ideas for reviving the Indian growth story.

Here are some suggestions with the tongue firmly where it belongs.

Mandir Wahin Banayenge:  When people build something, everyone gets to take home a pay-packet. The mason, the ironsmith, the interior designer, the painter. Well, you got the drift. But, what if the common man has no money to build, and the builders have lots of built-up area that nobody’s buying and construction has fallen by 4%? Worry not. We are, after all, a country of bhakts.

So, start building a mammoth Ram Temple in Ayodhya. Call it, as is the prevailing practice in Modi Raj, the biggest shrine anywhere in the world. Then, use NREGA workers, who are currently sitting idle in the hinterland, to create replicas of the temple in every village.

While you are at it, don’t forget the basic principle of economics: If you can’t give them bread, at least give them beads.

Rename GDP: Feroze Shah Kotla is now Arun Jaitley stadium. Jawaharlal Nehru University is about to be named Modi varsity. Akbar’s legacy is now Rana Pratap’s. Mughalsarai is Deen Dayal Upadhyaya railway station. Taj Mahal could soon be Tejo Mandir. And Srinagar has already been named Syama Prasad Mukherjee Nagar except that the Whatsapp announcements on it are stuck because of a lockdown in the Valley. But, does any of it really impact growth?

So, why not rename the damned GDP itself? Why not call it dollar instead? Then, it would automatically keep rising. And our fantasy of being the fastest growing dollar in the world would become a reality. God forbid, things go wrong, we can always blame Chacha Sam for it. It’s a win-win, at least we’d have punching bag available other than Uncle Nehru.

Manufacture films called 10% GDP or $5 Trillion Economy. And when, in their climactic moment, Akshay Kumar announces that Mission GDP has finally taken off, manufacture some real tears and burst into a Bharat Mata ki Jai.

Proclaim with pride we are Hindus: Once upon a time in some la la land version of our mythology, we were a sone ki chiriya (golden bird). Now we are an elephant of clay. What went wrong? Simple: We forfeited the Hindu way of life.

So, let’s go back to it to revive private consumption that’s slid to its lowest in years. Let’s start consuming the so-called elixirs of Hindu life — gau mutra (cow urine). Let’s start living in tenements made of cow-pat, especially with that pesky neighbour threatening a nuclear war, whose impact, we have been told, is zilch on those lovely brown cakes.

If you get the drift of this mooing, er, musing, you’d know the Hindu way of life these days comes at zero cost. There are so many of them gau matas (cows) on the road, that the raw material for the drinks and homes is almost free. With the money saved, buy a plot of land in Kashmir.

Nuke Pakistan: How do you make a line bigger without touching it, Akbar (or was it Rana Pratap?) once asked Birbal (or was it Bhama Shah?). Simple replied Birbal/Bhama Shah: Draw a smaller line next to it.

You got it, didn’t you, Alec Smart? To make our economy look big, forget China, ignore Bangladesh (growing at 8%). Nuke Pakistan (expanding at 5.4%). Then boast to the world how we have become the fastest growing economy in the subcontinent after Nepal, Bhutan and Myanmar.

Merge Nifty, Sensex, S&P, Dow Jones and NASDAQ: We need lower NPA figures, so we merge banks. We need foreign flows, right? So, merge our stock market indices with those of the US. As the Americans once pleaded: Occupy Wall Street.

Trump will protest, you said. No. By the time he offers to mediate, we’d have unilaterally abrogated the US’ special rights on NASDAQ. And our media would have told the world, all is well and that it’s for the benefit of the poor Americans who can’t manage their own lives, a deficiency that Nehru somehow failed to address as a brown man’s burden.

If nothing else, it would at least distract the world from the state of our economy.

After all, it’s the headline, stupid!