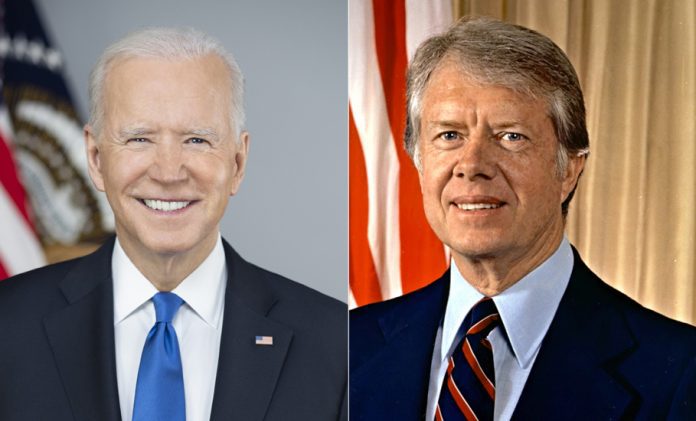 US President Biden is seen as a modern day Jimmy Carter, the 39th President of USA, who is largely remembered for botching up the Iran crisis

The Republicans led by the former President Donald Trump do not exactly need a reason to go after President Joseph Biden. Only this time, the 46th occupant of the Oval Office has given not just conservatives in the House of Representatives and Senate a reason but also anybody who wants to take a shot.

And Biden has given the ammunition needed in the dangerous and clumsy fashion he pulled the United States out of Afghanistan topped off only with the recent horrific terrorist attack on Kabul International Airport that has left nearly 200 dead including 13 American service personnel.

Also, at this stage it hardly matters who pulled the trigger—the Islamic State of Khorasan, ISK or dissidents within the Taliban who are tucked away inside the ISK. And the retribution by way of the United States unleashing its power is said to be underway with the larger question of whether the Biden administration would put boots back on the ground.

It is an unlikely scenario. Americans by and large did not have any problem with the boys coming home; they only did not have the stomach to witness all that unfolded in the name of a withdrawal for the country’s prestige and a name that has been “wounded” globally.

Then comes a raft of comparisons—that Biden is nothing more than a modern makeover of a Jimmy Carter, the 39th President who in spite of all that he did is remembered by both Democrats and Republicans for only one thing: 52 American hostages languishing in Iran for 444 days starting November 4, 1979.

Since the time Jimmy Carter has been seen as a failed President, no Democratic nominee for the Presidency even wanted to have him in the National Convention, give him a decent seat or allot a prime slot for speaking. Biden has been the only exception in the fashion he has dealt with President Carter right from the time he was the first Senator to endorse Carter in 1976 to recently meeting him at the home of the 96-year-old in Plains, Georgia.

Also read: Can you trust the US as an ally, after Afghanistan?

In fact, one television host even went to the extent of blaming the present First Lady, Dr Jill Biden, for the current crisis in Afghanistan—she is responsible for failing to advice Joe Biden against running for Presidency! Nothing could be nuttier than this it would seem.

The bottom line would be that both Carter and Biden would seem to be victims of circumstance, in the wrong place at the wrong time. The mess in Iran in 1979 was not started by Jimmy Carter; rather it dates back to the early 1950s, when the Central Intelligence Agency (CIA) and the British Intelligence acted together to overthrow the government of Prime Minister Mohammed Mossadegh and install the pliable Mohammad Shah Reza Pallavi who had a free hand until dissent got the upper hand in 1978 resulting in Ayatollah Ruhollah Khomeini coming to power.

The mistake the Carter administration made was to allow the Shah for medical treatment in New York when the government in Teheran was demanding his repatriation to stand trial for crimes he had committed.

On November 4, 1979 Americans were taken hostages; the Shah was quietly asked to leave and finally settled down in Egypt after spending some time in Panama. Carter also presided over the botched rescue mission cobbled together by the Pentagon—Operation Eagle Claw—or known as Operation Tabas in Iran—on April 24, 1980. It was an embarrassing show in the desert resulting in the loss of three choppers and lives of American service personnel.

President Carter had to accept his responsibility that resulted in the resignation of Secretary of State Cyrus Vance. The fiasco in Iran was pinned on Jimmy Carter in 1980 when he was only reaping what was sowed in 1953.

The conservatives and extremists of the right are now hammering away at President Biden for following through on what President Trump did by way of the Doha Accords of February 2020. The Trump administration pledged to withdraw all American and NATO troops by May 1; in return the Taliban agreed to cease any and all attacks on US forces.

Also read: Biden is slipping and democrats should be worried of political Tsunami

The catch was quite apparent: Doha talks with the Taliban did not include the government of Afghanistan and the Taliban was quite free to attack the Afghan forces which it started doing when the withdrawal started. In fact, political and media commentators have also pointed out that the Trump administration forced the Afghan government to free all prisoners—some 5,000 or so that included Taliban fighters, ISIS and every known and unknown terrorist and thug.

Apparently in retrospect, the Taliban is itself questioning the efficacy of this move as it set free many who are members of terrorist squads inimical to the powers that be now in Kabul. The mad frenzy that is seen now at the Kabul Airport is also traced back to the Trump administration that slowed down the issue of special visas to Afghans anxious to get out prior to the arrival of the Taliban.

The orderly evacuation process not only slowed but resulted in a mad rush to the airport fearing the worst. And terrorists always look for crowds anticipating the impact of a detonation.

When the dust settles, President Biden will find out that it was a massive intelligence failure, not of satellites and electronic intercepts but of human calculations that made him not see what was in front of his eyes: the scale of corruption. Biden, for instance, believed that the Afghan army would hold out.

It did not and could not only because of a lack of will but also of bloated numbers that existed only in paper perhaps for someone to make a killing in the payroll accounting. Commentators have already started talking about these factors; it was not on account of the Afghan army being fed french fries for lunch that it folded en masse!

The numbers simply was not there or did not add up.

Unlike President Carter who was an outsider to Washington, Biden is an insider. In the short term, the goings-on in Afghanistan is an unnecessary sideshow for the White House and the Democrats by way of marching along on the legislative fronts. But foreign policy is something that has rarely mattered in American Presidential politics—it is the pocketbooks, the economy and governance.

The conservative President Ronald Reagan was shattered in October 1983 when a truck bomber flattened a peacekeeping barrack killing 241 U.S. Marines in Beirut, Lebanon—a suicide attack that was pinned on the Hezbollah, Syria and Iran. Reagan went on to crush Walter Mondale in a landslide in the Presidential election of November 1984.

A former senior journalist in Washington covering North America and United Nations, the writer is currently a Professor of Journalism and Mass Communication in  the College of Science and Humanities at SRM Institute of Science and Technology, Chennai

How YS Sharmila has emerged as a serious play...

Unemployment a key concern in Gujarat even as...

Top 8 places in India for a December Christma...